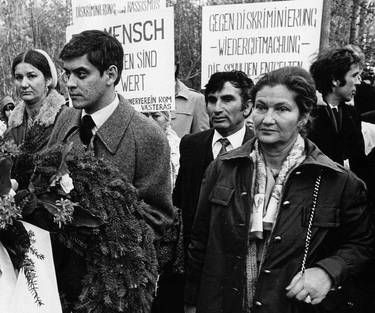 Rainer is Professor of Modern European History at the University of Essex and the programmer of the University of Essex’s annual Holocaust Memorial Week. In today’s blog, Rainer looks at the long and ongoing battle of the Roma for public recognition of the crimes committed against them during the Nazi period.

After the defeat of Nazi Germany and her allies, the surviving Roma who returned from the camps and the labour brigades, or from places of hiding, were treated everywhere as they had always been treated: they were ‘the Gypsies’. Many Roma found their property looted or taken away. There was no compensation for the persecution suffered. Instead, discriminatory legislation remained in force, and one 1950s court ruling in Germany called the ‘Gypsies’ unashamedly ‘a country plague in western civilised nations’. The persecution was widely regarded as something the Roma had brought upon themselves. Outside the affected families, there was little to no empathy with the victims or the survivors.

In 1956, Germany’s highest court of civil and criminal jurisdiction ruled that persecution of the Roma on racial grounds began only with the implementation of Himmler’s so-called Auschwitz order of 16 December 1942. Measures taken against the Roma before this order were judged a lawful approach to combatting crime and ‘antisocial’ behaviour, and upholding national security. It took almost 60 years, until in May 2015 the court eventually distanced itself from its 1956 ruling.

Requests for compensation were only considered for deportations that occurred after 1942 and were clearly evidenced. In 1963 it was backdated to 9 December 1938, the date of Himmler’s decree on ‘Combatting the Gypsy Plague’. However, this continued to exclude many forms of persecutions, including the deportation to the special ‘Gypsy camps’, the conscription to forced labour, or the compulsory sterilisations that had happened since 1934.

The civil rights movements in the 1970s played an important role in raising awareness of Roma victimhood during the Nazi period. On 27 October 1979, the Association of German Sinti, the international Roma umbrella organisation Romani-Union and the human rights organisation Society for Threatened Peoples organised an international ceremony of remembrance at the Gedenkstätte (memorial) Bergen-Belsen. They demanded a public recognition of the Nazi genocide of the Roma, compensation for their suffering, and attention paid to their continuing marginalisation and discrimination in post-war Europe. An inscription was placed onto Bergen-Belsen’s wall of remembrance that explicitly commemorates the Sinti and Roma victims.

Inscription in commemoration of the murdered Sinti and Roma on the wall of remembrance at the Gedenkstätte Bergen-Belsen. It reads: In mourning and profound reverence, we, Sinti (Zigeuner), remember the victims of our people. Through their violent deaths, they serve as an exhortation to the living to resist the injustices perpetrated by people on other people.

In 1982, the Central Council of German Sinti and Roma (Zentralrat Deutscher Sinti und Roma) was set up, chaired by businessman Romani Rose, a German Sinto born in 1946. Romani’s father survived the Nazi period in hiding, but 13 members of Romani’s family, including his grandparents, perished. In a meeting with a delegation of the Zentralrat on 17 March 1982, the then West German Chancellor Helmut Schmidt acknowledged for the first time publicly that the Roma were persecuted by the Nazis for racial reasons. It was a recognition repeated by Schmidt’s successor Helmut Kohl in the German parliament in 1985.

Why did it take so long for the persecution of the Roma to be officially recognised? The obvious causes are the continued discrimination of the Roma all across Europe, the lack of recognised and effective national and international Roma pressure groups, and the lack of a Roma leadership both proud to be Roma and able to interact as equals with the representatives of the wider societies.

Roma scholar and activist Ian Hancock links the reluctance of many Roma to remember and commemorate their victimhood during the Nazi period to their socioeconomic status in today’s societies, arguing remembrance is a luxury the Roma cannot afford.

Furthermore, the fact that, in contrast to the Jews, deportation and extermination of the Roma were selective and not comprehensive impacted on the development of a collective historical memory. Roma activist Nico Fortuna points out: ‘The Jews were shocked [about the deportation] and can remember the year, date and time it happened. The Roma shrugged it off. They said, ‘Of course I was deported. I’m Roma; these things happen to a Roma’.’

On 24 October 2012, after long delays, German Chancellor Angela Merkel inaugurated Berlin’s Memorial to the Sinti and Roma Murdered under the National Socialist Regime. However, while this memorial is a long overdue recognition of the Nazi genocide of Europe’s Roma and Sinti, the question has to remain open, for now, whether in the longer term it will achieve more than just become part of Germany’s – and possibly Europe’s – institutionalised memory culture. Will commemoration of Roma victimhood during the Nazi period be able to impact on the attitudes that the wider societies in Europe hold towards the Roma and Sinti today.