In 1953 Cambodia gained independence after nearly a century of French rule. The country was ruled by a monarch, King Sihanouk, who abdicated in 1955 to pursue a political career. 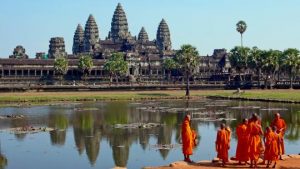 In 1970, Sihanouk was overthrown. The Prime Minister, General Lon Nol, assumed power. He announced that this marked the beginning of the Khmer Republic and sent the Army to fight the North Vietnamese in Cambodia. Sihanouk – in exile in China – formed a guerrilla movement with Cambodian Communists (the Khmer Rouge, headed by Pol Pot from 1962). During the early 1970s, the Cambodian Army faced two enemies: the North Vietnamese and Communist Khmer Rouge guerrillas. Gradually, the Army lost territory.

On 17 April 1975, Khmer Rouge forces entered the capital city, Phnom Penh, and defeated the ruling Lon Nol Army. The seizure of Phnom Penh marked the beginning of genocide in Cambodia.