The International Criminal Tribunal for the former Yugoslavia (ICTY) was established by the United Nations in response to mass atrocities and war crimes against various ethnic groups taking place in Croatia, Bosnia, Kosovo, Serbia and Macedonia. 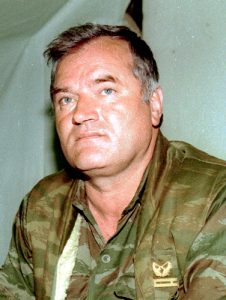 It sat in The Hague, in the Netherlands and changed the landscape of international humanitarian law by proving that those suspected of committing genocide and ethnic cleansing could be called into account.

In 2002 former Serbian President Slobodan Milošević was charged by the ICTY with committing Crimes Against Humanity and genocide. He died of a heart attack in custody before a verdict could be reached.

In July 2008 former Bosnian Serb President Radovan Karadžić was arrested for command responsibility and the order of the Srebrenica Massacre. He was charged with the murder of at least 7,000 male Bosnian Muslims in Srebrenica. The prosecution began presenting evidence on 13 April 2010 and he was found guilty of genocide, war crimes and crimes against humanity and sentenced to 40 years imprisonment. He appealed his sentence in 2016, but this was rejected, with the tribunal ruling that his sentence was too light, and increasing it to life in prison in 2019. In May 2021, the UK government agreed for Radovan Karadžić to be transferred to a UK prison to serve the rest of his life sentence.

In July 1995, Ratko Mladić was indicted by the ICTY. He was suspected to be in hiding and in 2010, his family filed a request to declare him dead. However, he was found in May 2011, hiding in a house belonging to one of his relatives and he was arrested. He was accused of crimes against humanity, war crimes, and genocide in Srebrenica. The trial began in May 2012, he was found guilty in 2017 and sentenced to life imprisonment.

The ICTY was dissolved at the end of 2017, with outstanding appeals being heard by the UN’s residual mechanism for criminal tribunals (MICT).