Severely mentally and physically disabled people, as well as those perceived to have disabilities, were targeted because of Nazi beliefs that disabled people were a burden both to society and to the state. From 1939 to 1941 the Nazis carried out a programme of ‘euthanasia’, known as the T4 programme. The name T4 is an abbreviation of Tiergartenstrasse 4, the address from which the programme was coordinated. 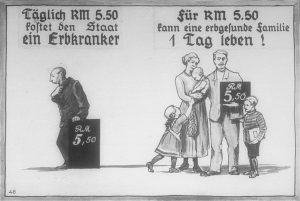 Propaganda against the mentally disabled

In 1933 the ‘Law for the Prevention of Hereditarily Diseased Offspring’ was passed, allowing for the forced sterilisation of those regarded as ‘unfit’. This included people with conditions such as epilepsy, schizophrenia and alcoholism. Prisons, nursing homes, asylums, care homes for the elderly and special schools were targeted to select people for sterilisation. It has been estimated that between 1933 and 1939, 360,000 individuals were subjected to forced sterilisation.

In 1939 the killing of disabled children and adults began. All children under the age of three who had illnesses or a disability, such as Down’s syndrome, or cerebral palsy were targeted under the T4 programme. A panel of medical experts were required to give their approval for the ‘euthanasia’, or supposed ‘mercy-killing’, of each child.

Many parents were unaware of the fate of their children, instead being told that they were being sent for improved care. After a period of time parents were told their children had died of pneumonia and their bodies cremated to stop the spread of disease.

Following the outbreak of war in September 1939 the programme was expanded. Adults with disabilities, chronic illnesses, mental health problems and criminals who were not of German origin were included in the programme. Six killing centres were established to speed up the process – the previous methods of killing people by lethal injection or starvation were deemed too slow to cope with large numbers of adults. The first experimental gassings took place at the killing centre in Brandenberg and thousands of disabled patients were killed in gas chambers disguised as shower rooms.

The model used for killing disabled people was later applied to the industrialised murder within Nazi concentration and extermination camps such as Auschwitz-Birkenau.

It is estimated that close to 250,000 disabled people were murdered under the Nazi regime. 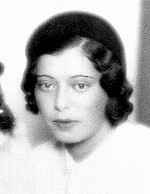 Helene Melanie Lebel was one of approximately 250,000 people murdered by the Nazis because they were physically or mentally disabled.

Berge Kanikanian was born in England in 1968, and has learning difficulties. He was inspired to make a film about Aktion T4, the Nazi programme which attempted to murder German citizens who had mental or physical disabilities.