We are a proud member of the UK delegation to the International Holocaust Remembrance Alliance (IHRA). With 31 member countries from around the world, IHRA works to strengthen, advance and promote Holocaust education, research and remembrance.

HMDT works alongside experts in the field of Holocaust remembrance and education, who together form the UK delegation to IHRA. The delegation is led by Lord Pickles – the UK’s Special Envoy for Post-Holocaust Issues, and HMDT’s Honorary Vice President.

The national government of each member country forms a delegation, generally consisting of leading educators, academics and representatives of museums and memorials. The Chairmanship of the IHRA is held each year by a different member country on a voluntary basis, which hosts two plenary meetings in their country.

Find out more about IHRA here.

IHRA Committee on the Holocaust, Genocide, and Crimes Against Humanity 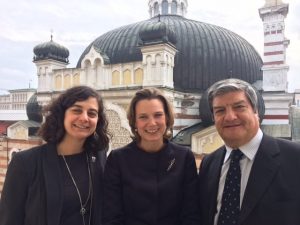 Our Chief Executive, Olivia Marks-Woldman is the incoming Chair of the Committee on the Holocaust, Genocide, and Crimes Against Humanity. It shares IHRA expertise on the Holocaust with those active in preventing and combatting genocide and crimes against humanity.

As with other IHRA committees, the committee brings together experts from a range of professional backgrounds and countries to recommend multidisciplinary solutions to persistent challenges.

You can find out more about IHRA’s structure here.

HMDT endorses and promotes the IHRA Working Definition of Antisemitism. This definition was adopted in May 2016 and was the product of an international effort to define antisemitism and provide illustrative examples. The definition has been adopted by the UK Government, public bodies, religious groups and many councils across the UK.

Antisemitism is a certain perception of Jews, which may be expressed as hatred toward Jews. Rhetorical and physical manifestations of antisemitism are directed toward Jewish or non-Jewish individuals and/or their property, toward Jewish community institutions and religious facilities.

To guide IHRA in its work, the following examples may serve as illustrations:

Manifestations might include the targeting of the state of Israel, conceived as a Jewish collectivity. However, criticism of Israel similar to that leveled against any other country cannot be regarded as antisemitic. Antisemitism frequently charges Jews with conspiring to harm humanity, and it is often used to blame Jews for “why things go wrong.” It is expressed in speech, writing, visual forms and action, and employs sinister stereotypes and negative character traits.

Contemporary examples of antisemitism in public life, the media, schools, the workplace, and in the religious sphere could, taking into account the overall context, include, but are not limited to:

Antisemitic acts are criminal when they are so defined by law (for example, denial of the Holocaust or distribution of antisemitic materials in some countries).

Criminal acts are antisemitic when the targets of attacks, whether they are people or property – such as buildings, schools, places of worship and cemeteries – are selected because they are, or are perceived to be, Jewish or linked to Jews.

Antisemitic discrimination is the denial to Jews of opportunities or services available to others and is illegal in many countries.