Rwanda is a small landlocked country in East-central Africa which is home to approximately 12 million people. Historically there are three main social groupings in the country – the majority Hutu (84%), the minority Tutsi (15%), and the much smaller Twa (1%). 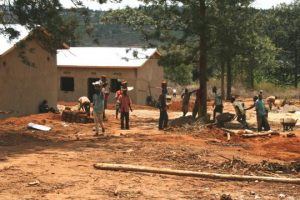 The distinction between Hutu and Tutsi was mostly social – the Tutsi forming the wealthy, powerful part of society, and the Hutus the lower, poorer part. Social mobility between these groups was possible. The Twa were traditionally forest dwelling people, and were the original inhabitants of Rwanda. They are a marginalised group within Rwandan society.

Until 1895 an independent Tutsi monarchy ruled the nation, implementing increasingly anti-Hutu policies. In 1895 the country became a German province, and after the end of the World War One Belgium took control of Rwanda under a League of Nations mandate. The Belgians initially relied on the traditional hierarchy and social structures including leaving the Tutsi King, who was recognised by both Hutus and Tutsis, to run the country. Under Belgian rule compulsory identity cards were introduced in 1926, which included ethnic identity. This created a rigid system of a racial identity fixed from birth, which had not existed before.

In 1957 The Hutu Manifesto was published which denounced the Tutsis and their perceived dominant position in Rwandan leadership. When the King died in 1959 the Hutus, supported by the Belgians, rose up against the Tutsi leadership. Thousands of Tutsis were murdered and over 100,000 were forced to flee to neighbouring countries including Uganda. The first municipal elections held in Rwanda took place in 1960 and saw a Hutu majority being elected. The monarchy was abolished in 1961, leading to further attacks against the Tutsis. In 1962 Rwanda was granted independence from Belgium and George Kayibanda from the Hutu nationalist party came to power.

The years following independence saw repeated massacres of Tutsis. There were also attacks on Hutus by Tutsis, who saw themselves denied political representation as the nation became a one-party State. Tutsis were denied jobs in the public service under an ethnic quota system which allocated them only 9% of available jobs. Tensions were further inflamed by increasing pressures on the Rwandan economy, resulting in rising levels of poverty and discontent.

Hutu president Habyarimana refused to allow the return of Tutsi refugees, leading to a group in Uganda forming the Rwandan Patriotic Front (RPF) while in exile. In October 1990 RPF rebels, led by Paul Kagame, invaded Rwanda in the hope of creating a power-sharing agreement. This led to the Rwandan civil war. The RPF were opposed by government forces which were equipped and trained by France and Zaire. In March 1991 a ceasefire was declared. Despite this, local attacks on Tutsis continued and the Rwandan Army trained civilian militia groups, known as the Interahamwe.

In 1993, after a three-year civil war, negotiations led to the Arusha Accords – a peace agreement between the Government of Rwanda and the RPF. The President and the RPF signed up to a power sharing agreement, although Hutu racial nationalists strongly opposed the agreement.