In the years following the genocide, more than 120,000 people were arrested and accused of crimes committed during the genocide. The prison system was overwhelmed, and people waited in extreme overcrowding and life-threatening prison conditions for their cases to be processed. 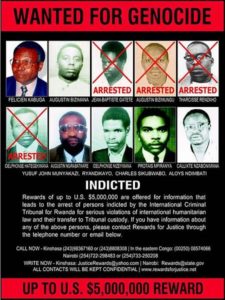 Many judges, lawyers and other legal professionals had been killed during the genocide, putting more pressure on the system. To deal with such an overwhelming number of perpetrators, Rwanda had to find a way to pursue justice, deciding on three different levels:

The International Criminal Tribunal for Rwanda

Following the genocide, in November 1994 the UN Security Council established the International Criminal Tribunal for Rwanda (ICTR), located in the city of Arusha in Tanzania. The ICTR focused on indicting and prosecuting high level people responsible for the genocide, including high-ranking military and government officials, politicians, businessmen, as well as religious, militia, and media leaders. It ran until 31 December 2015.

In total, 93 individuals were indicted for genocide and other serious violations of international humanitarian law committed in 1994. Of these, eight people remain at large as fugitives, and The UN Mechanism for International Criminal Tribunals is still working on tracking them down.

In 1998 the ICTR convicted Jean-Paul Akayesu, Mayor of Taba, of genocide and crimes against humanity. As the defined crime of ‘genocide’ did not yet exist at the time of the Holocaust, this was the world’s first ever judgement by an international court for the crime of genocide. His conviction also set a precedent that rape is a crime of genocide and a war crime.

Later in the same year Jean Kambanda, Prime Minister during the genocide, pleaded guilty to genocide and is the only head of government ever convicted of genocide. He is serving a life prison sentence in Mali.

In June 2011, Pauline Nyiramasuhuko – the former Family Affairs and Women’s Development Minister was sentenced to life imprisonment for her part in ordering and assisting massacres in Butare. She is the first woman to be convicted of genocide, and rape as a crime against humanity.

Rwanda’s national courts prosecuted those accused of planning the genocide or of committing serious atrocities, including rape. By mid-2006 around 10,000 genocide suspects had been tried.

In 2007, the Rwandan government abolished the death penalty, which had last been carried out in 1998 when 22 people convicted of genocide-related crimes were executed.

Due to the nature of the genocide, alongside those in power, hundreds of thousands of civilians were also guilty of crimes including murder and rape committed during the genocide. In 2005 the Rwandan Government re-established a traditional community court system called Gacaca (pronounced ga-cha-cha).

1,200 community courts across the country, with local village elders acting as judges, heard the cases of nearly two million people accused of genocide-related crimes. Perpetrators were given the opportunity to confess their crimes, and many victims learnt the truth about the deaths of their family members through these trials. The accused were often given lower sentences if they showed remorse and ask for forgiveness in front of their community.

Many who took part in Gacaca say these courts paved the way for reconciliation among Rwandans, although some survivors have criticised this system and there are some human rights concerns that the accused did not face a fair trial.

Gacaca was one of the world’s most extensive post-conflict justice systems, and completed its work in 2012.