Yugoslavia was created in 1929 after the unification of Serbia, Croatia, Slovenia, Macedonia, Montenegro, and Bosnia & Herzegovina. 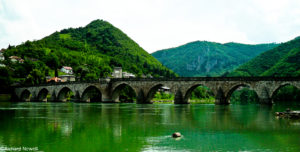 Bridge on the Drina ©Richard Newell

The history of the area means it has always been contested between different ethnic groups. Orthodox Christian Serbs and Roman Catholic Croats lived interspersed throughout Croatia and Bosnia. The Ottoman Empire ruled for many centuries, leaving a legacy of a Muslim population in Bosnia; neither Croat nor Serb.

World War Two left a poisonous legacy in Yugoslavia. Extreme nationalist Croats (the Ustaše) had been allowed to set up a puppet state by the Nazis. They launched a ferocious campaign of murder, atrocities and ‘ethnic cleansing’ against Serbs, Jews and Gypsies.

After the war, Communist dictator Josip Broz Tito claimed legitimacy from his role in the defeat of the Nazis and the Ustaše, and suppressed both Croat and Serb nationalism. He set up a complicated federal constitutional structure which carefully balanced the different nationalities in Yugoslavia.

By the 1970s Yugoslavia appeared to the outside world to be peaceful, and economically successful. However, the memory of World War Two atrocities, and centuries-old ethnic and religious tensions, were still present, despite their public suppression by Tito.

After Tito’s death in 1980, and the decline of communism across Eastern Europe, including the fall of the Berlin Wall in 1989, Yugoslavia’s political stability was undermined by the resurgence of Serb and Croat nationalism.

Slobodan Milošević, Communist President of Serbia, broke the Titoist taboo and began to use Serbian nationalist sentiment to his own advantage. He engineered the end of autonomous government in the ethnically-mixed Serbian regions of Kosovo and Vojvodina, and ensured a sympathetic leadership was installed in neighbouring Montenegro. Tito’s careful constitutional checks and balances were in tatters, as Serbian leader Milošević now controlled nearly half the country.

The situation inflamed nationalism in Croatia and Slovenia, both suspicious of Serbian nationalism. In 1991 both Slovenia and Croatia declared independence.

This left multi-ethnic Bosnia and Herzegovina in an impossible position. Bosniaks and Croats did not want to stay part of a Serb-dominated Yugoslavia. Most Bosnian Serbs wanted to join the emerging ‘Greater Serbia’, being created by Milošević. Yet they lived interspersed in the same country.

Bosnia and Herzegovina held a referendum on independence in February 1992, which was boycotted by the Bosnia Serbs. After independence was declared, Serb and federal Yugoslav armies entered Bosnia to secure Serb areas. The war which followed was a brutal interethnic conflict focused on territorial control.