Many black people who lived in Germany under the Nazi regime were persecuted, alienated and murdered during this period. The Nazis viewed them as a threat to the purity of the Germanic race. Nazi propaganda posters, showing friendship across racial groups, referred to ‘a loss of racial pride.’ 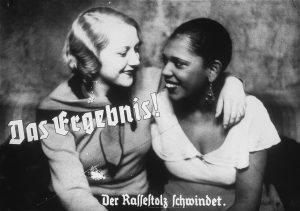 In the 1920s, around 24,000 Black people were living in Germany. African-German mixed race children were economically and socially marginalised in German society, and not allowed to attend university. Under the Nazis black people no longer had jobs and were excluded from many aspects of life.

When the Nazis came to power, one of the first directives was aimed at mixed-race children. Underlining Hitler’s obsession with racial purity, by 1937 every identified mixed-race child in the Rhineland had been forcibly sterilised, in order to prevent further ‘race polluting’, as Hitler termed it.

Hans Hauck, a black survivor of Nazi racial policies and a victim of the sterilisation programme, explained in the film Hitler’s Forgotten Victims that, when he was forced to undergo sterilisation as a teenager, he was given no anaesthetic. Once he received his sterilisation certificate, he was ‘free to go’, as long as he agreed to have no sexual relations with Germans.

Prisoners of war (POWs) faced mistreatment at the hands of the Nazis, who did not uphold the regulations imposed by the Geneva Convention (the international agreement on the conduct of war and the treatment of wounded and captured soldiers). Black soldiers of the American, French, and British Armies were worked to death on construction projects or died as a result of mistreatment in concentration or prisoner-of-war camps. Others were never even incarcerated, but were instead immediately killed by the SS or Gestapo. Black prisoners received harsher treatment and less food than white POWs, and whilst most white POWs were imprisoned, many of the black soldiers either worked until they died or were executed.

Watch our film about Nazi persecution of black people:

Download this film to use in your HMD activity here.