Waldemar Nods was a black grandson of a slave from Suriname, who moved to the Netherlands in 1927, aged 19. He had a son – Waldy – with his Dutch wife – Rika – and together they hid Jews from the Nazis during the German occupation. They were caught and deported to concentration camps in Germany.

You can download the PDF version of Waldemar's life story here 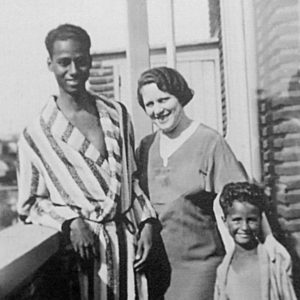 Waldemar Nods was born on 1 September 1908 in Paramaribo, Suriname (a Dutch colony in South America), the son of a gold prospector and the grandson of a slave. He left Suriname to study in the Netherlands, arriving in The Hague in 1927, but found it hard to establish a career due to widespread prejudice towards his dark skin.

In October 1928, Waldemar met Rika van der Lans: white, twice his age and already married with four children. When they began their relationship, it caused a scandal. Rika had already upset her Catholic parents by marrying a Protestant, Willem Hagenaar, in 1913. But by the time she met Waldemar, the marriage had broken down. She had left Willem and taken their children with her to live in The Hague, where she supported them by renting out rooms, which is how she met Waldemar.

Waldemar and Rika soon fell in love and their relationship was healthy and strong, in spite of the social ridicule to which it exposed them. Two of Rika’s children - Willem, 13, and Jan, seven - felt betrayed by the relationship and returned to their father. Willem senior was furious when he heard his estranged wife was involved with a black man, and successfully claimed custody of the two remaining children.

Rika was disowned by family and friends, but soon she and Waldemar had a son of their own. Born in November 1929, Waldy was nicknamed ‘Sonny Boy’ after an Al Jolson song popular at the time.

Waldemar completed his studies in 1931 and secured a job as an accountant. His new family moved with him to Scheveningen, a seaside district of The Hague, where they opened a guesthouse in 1934: Pension Walda. Against the backdrop of the Great Depression, the guesthouse was remarkably successful, especially with German holidaymakers. This was largely thanks to Waldemar’s perfect German, acquired by studying for his diploma in business correspondence in that language.

Waldemar and Rika were married on 17 May 1937. In November of that year they moved Pension Walda to a larger house on the promenade in Scheveningen. Business continued as normal until the start of the Second World War. On 31 August 1939, someone wrote in the guestbook: ‘With great pleasure we think back to the beautiful sunny days this August. Too bad that international tensions and mobilisation have cast a shadow on the end.’

In February 1940, two Dutch soldiers were quartered in the guesthouse. Young Waldy was excited; the soldiers gave him an old helmet to play with. On a photo from 5 May that year, Rika wrote the caption: ‘our days of fear’.

The German invasion came five days later, and on 15 May the Netherlands surrendered. Some people resisted the occupation, but for many the mood was one of pragmatic adaptation. The Dutch police and civil service cooperated with the deportation of Jews.

German soldiers were quartered at Pension Walda, and their relationship with their hosts was not unfriendly. Rika and Waldemar had known too many Germans to assume they were all ardent Nazis. 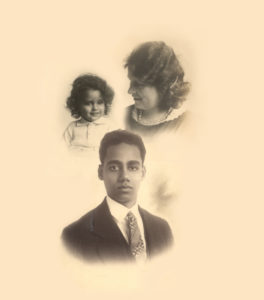 In spring 1942, Rika and Waldemar were forced to leave their seafront guesthouse by the construction of the ‘Atlantic Wall’, intended by the Germans to defend occupied Europe from Allied invasion. They moved to a property on nearby Stevinstraat, and it was here, in November 1942, that the couple began to hide Jews from the Nazis.

Waldemar and Rika were sought out by the Dutch resistance as ideal candidates - they were a small family with spare room in their home and they were also free of the antisemitism that occurred among the resistance, which made Jews much harder to hide than other Dutch fugitives.

Their son Waldy was unaware of the hidden guests until the day he was brought home by the police after getting in a fight with a boy who had racially abused him. This frightened his mother, who told him about the Jews and insisted that nobody must find out about them.

In August 1943 the family moved to a house on Pijnboomstraat where they continued to hide Jews and others. The resistance sent them fugitives others were unwilling to accommodate. Among them were Dobbe Franken, the daughter of a leading member of the Jewish Council in Rotterdam, and Gerard van Haringen, a Dutch SS deserter who now regretted running away from home aged 17 to sign up.

Just before dawn on 18 January 1944 the house was awoken by a ring at the door. Everyone, including Waldy and the hidden fugitives, was interrogated. Waldemar admitted to hiding Jews, but Rika refused to make a statement and was severely beaten. Investigations after the war revealed that they were betrayed by a phone call from Rotterdam, but the identity of the caller is a mystery.

Waldemar and Rika were taken to the infamous Scheveningen prison, which became known as the ‘Orange Hotel’ for its reputation for housing Dutch resistance. They were interrogated by Kees Kaptein, the self-styled ‘greatest executioner of Jews in the Netherlands’. Rika was sentenced to life imprisonment and sent to Camp Vught. Waldemar was given a more lenient sentence, but labelled a ‘bad case’ by Kaptein, and was soon deported to the Neuengamme concentration camp in Germany.

Waldemar’s dark skin stood out at Neuengamme, SS guards remarking on ‘a chimpanzee who surprisingly turned out to be able to understand and perform complicated instructions to the letter in German’. Thanks to his language skills he was put to work in the camp post office and was able to communicate with his family.

Camp Vught was evacuated as the Allies advanced, and on 6 September 1944 Rika was put on a freight train to Ravensbrück in Germany. The camp was packed with starving prisoners, temperatures were sub-zero and there was a metre of snow on the ground. Those who became too weak to work were killed. Rika succumbed to an outbreak of dysentery and was sent to a hospital considered the last stop before the gas chamber. She appeared to recover and was sent back to the camp, but disappeared after a subsequent ‘selection’ and died there in February 1945.

Neuengamme was evacuated on 29 April. Waldemar and the other remaining prisoners were put on a ship, SS Cap Arcona. The Germans intended to sink the ship and drown them, but RAF planes did the job for them, mistaking it for a troop ship. SS Cap Arcona sank in the Bay of Lübeck on 3 May 1945, three days after Hitler’s suicide. Only 350 of the 4,500 concentration camp prisoners on board survived. Waldemar, a strong swimmer, made it to shore, but was gunned down by SS child soldiers with orders to shoot any survivors.

Waldy had been taken by an uncle after his parents’ arrest. He was passed between family members before being sent, like many city boys, to a host family in the country. He was harder to place than most, as many families were unwilling to take a mixed race child. Soon after the war he heard testimony of his parents’ fate. He married and lived with his wife in the Netherlands. He died in May 2015.