From 1993 a UN peacekeeping force of 2,500 soldiers was present in Rwanda to monitor and assist with the implementation of the Arusha peace agreement. They were known as the United Nations Assistance Mission for Rwanda (UNAMIR). 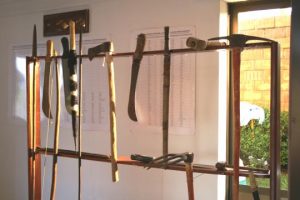 Weapons used during the Genocide

As the genocide began, there was confusion about the role of the UN forces on the ground and whether they had the power to intervene to protect people from the killing. On 21 April 1994, 11 Belgian soldiers were tortured and killed, after handing their weapons over to Rwandan government troops. After these deaths the Belgian Government withdrew their soldiers, and other participants in the mission did the same. UNAMIR was left with just 250 people. The UN Commander General Roméo Dallaire was ordered three times to leave the country. Each time he refused. His remaining soldiers did their best to prevent what killing that they could. Eyewitnesses report that Dallaire drove into towns at night and rescued people.

Dallaire has criticised the response and the orders he received. At the 2006 HMD UK National Ceremony he said:

We have a responsibility to protect, we do not have the right to assess and to establish a priority within humanity, for all humans are human and not one of us is more human than the other.

While the massacres were continuing the United Nations Security Council debated the situation in Rwanda. They refused to describe it as ‘genocide’. On 17 May 1994 the UN agreed to send 6,800 troops and policemen to protect civilians – although arguments about who would cover the costs of the operation and provide the equipment delayed the deployment. The Security Council passed a resolution saying ‘acts of genocide may have been committed’. It wasn’t until 22 June that the UN agreed that the atrocities were officially genocide. Troops had yet to arrive in the country.

The failure of the international community to intervene to stop the Genocide in Rwanda has been the subject of intense criticism and controversy. The UN leadership came in for heavy censure. On a visit to Rwanda in 2005 former US President Bill Clinton expressed ‘regret for my personal failure’ to prevent the genocide.