In September 2004, the U.S. Secretary of State Colin Powell applied the label of ‘genocide’ to Darfur – the first time the US Congress has done this during an ongoing conflict. However, despite this and the ICC indictments, international intervention in the conflict has been limited. 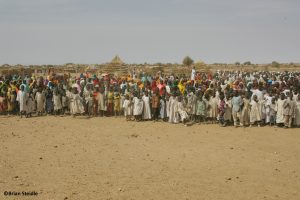 An African Union force of 7,000 troops was deployed in 2004 but was understaffed and did not have the mandate to intervene to prevent atrocities – just to monitor them.

International non-governmental organisations around the world held a Global Day for Darfur in September 2006 and 2007 calling on the International Community to protect civilians and for the Sudanese Government to allow the United Nations into the region.

In 2007 the UN upgraded the international military presence in Darfur by creating the African Union-United Nations Mission in Darfur (UNAMID). Their mandate is to protect civilians and deliver humanitarian aid. The troops are largely from African countries.

In July 2011, the Sudanese government and Liberation and Justice Movement, one of the rebel groups, signed the Doha Document for Peace in Darfur. This included agreements regarding wealth sharing, restitution for Darfuri survivors, a ceasefire agreement, release of JEM prisoners in Khartoum and recognition of JEM as a political party. UNAMID was tasked with administering this agreement on the ground. However, violence in Darfur has continued since this agreement was signed.

The Sudanese Government has called for UNAMID to be withdrawn, but the UN Secretary General has advised the Security Council to renew the UNAMID mandate each year.

In 2009, the International Criminal Court issued a warrant for the arrest of Sudan’s President on charges of Crimes Against Humanity and War Crimes in Darfur. To date, he has not been arrested. A second round of indictments was issued by the ICC in July 2010, this time incorporating charges of genocide.