In September 1995 a NATO military operation took place against the Bosnian Serbs, forcing them into peace negotiations. The Dayton Peace Accords were agreed in November 1995, and ended the Bosnian War, the worst conflict in Europe since World War Two. 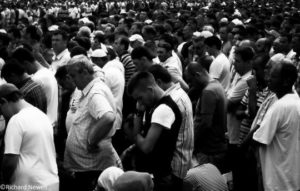 Bosnia and Herzegovina was confirmed as an independent and unified state, made up of two federal entities – the (Bosniak-Croat) Federation of Bosnia-Herzegovina and the Bosnian Serb Republic – Republika Srpska.

Srebrenica lies within the borders of the Republika Srpska. Its pre-war Bosniak population of nearly 30,000 plummeted to just a few thousand, despite guarantees that survivors should be able to return.

In 2007, the International Court of Justice, the United Nation’s highest judicial body, ruled that the Srebrenica massacre was an act of genocide, confirming the judgment of the International Criminal Tribunal for the former Yugoslavia.