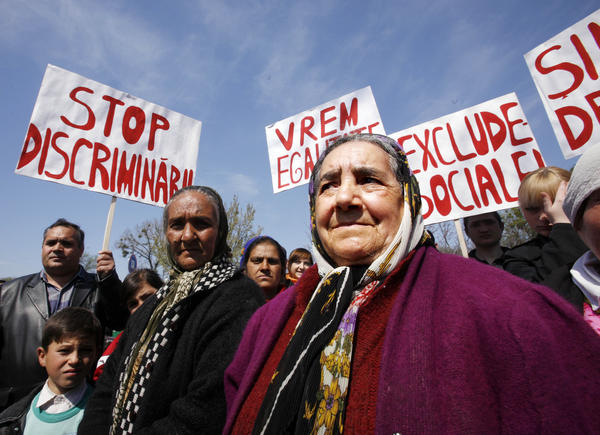 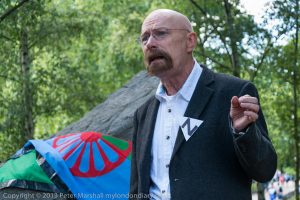 In the ninth and concluding blog, Rainer looks at the ongoing debates about how the fate of the Roma during the Nazi period should be remembered and commemorated, and how we should refer to their persecution.

In the long and continuing battle for public recognition as victims of Nazi persecution, Roma activists increasingly condensed their suffering into the name of Auschwitz. By the 1980s Auschwitz had become a recognised symbol of Jewish persecution, and there was a feeling – consciously or unconsciously – that it would help their cause if the Roma framed their story of persecution in a way already familiar to a wider public – even though this, in effect, creates something that might be called a ‘commemoration myth’. Memorable stories such as Settela Steinbach’s further reinforce this Auschwitz narrative.

In particular, the second and third generations of Roma survivors advance the notion of Auschwitz as a common place and common symbol of the systematic persecution for both Roma and Jews. This is despite the fact that, for the Roma, the experience of persecution was diverse and, for a majority, it meant compulsory sterilisation, forced labour brigades, mass shootings and arbitrary killings, rather than the industrialised extermination in the gas chambers of Auschwitz or other camps in the east. 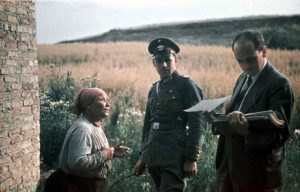 Since 1997, the date of the liquidation of the Auschwitz Gypsy Family Camp, 2 August, has been has been marked as Romani Extermination Remembrance Day; 16 May, the day Roma resisted their transportation to the gas chambers in Auschwitz, is marked as Roma Resistance Day. Even Berlin’s Monument to the Sinti and Roma Murdered Under the National Socialist Regime bears the visible sign of this tendency: the poem by Italian Rom Santino Spinelli to lament those who perished is called Auschwitz. 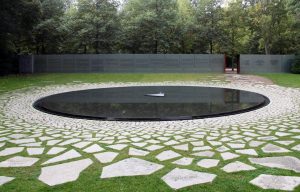 Berlin’s Monument to the Sinti and Roma Murdered Under the National Socialist Regime – the poem runs around the edge of the pool, hovering just below the water’s surface. © Dani Karavan/CCBY

The debate is ongoing about how the fate of the Roma during the Nazi period should be remembered and commemorated. At the same time there is the issue of how to refer to their persecution. A description that probably everyone can agree on is ‘the Nazi persecution of the Roma’, but there is a danger this underrates its racial grounds and its organised and systematic processes, or even implies a hierarchy of victims by differentiating between those who perished in the Holocaust and those who perished as a result of ‘persecution’.

The ground-breaking exhibition developed by Romani Rose and his team for the Documentation and Cultural Centre of German Sinti and Roma in Heidelberg shows how the terminology is evolving and changing. The original German-language version of this exhibition, opened in 1997, was called The National Socialist Genocide of the Sinti and Roma, emphasising the systematic and racial nature of the persecution. However, an English-language version of this exhibition, first shown at the European Parliament in January 2006, was titled The Holocaust Against the Roma and Sinti, reflecting an increasing preference for the use of a term that shadows the Jewish experience. 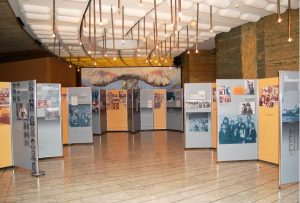 In order to include the wide variety of Roma experiences during the Nazi period, Roma scholar and activist Ian Hancock introduced in early 1990s the term Porajmos (also spelt Porrajmos). The word was coined by a Kalderash Rom and means ‘devouring’ or ‘destruction’ in some dialects of the Romani language Romanes. However, many Balkan Roma emphatically reject this term as disrespectful because of the sexual connotation it has in some Balkan Romanes dialects. Instead, the Romani linguist Marcel Courthiade proposed the term Samudaripen (‘mass killing’), which Hancock rejects as not conforming to Romanes morphology. Other terms used occasionally are Kali Traš (‘Black Fear’) or Berša Bibahtale (‘The Unhappy Years’).

None of these terms have entered everyday language in the way the term Holocaust has, and none of them are accepted by all Roma populations across Europe and beyond. The general trend, therefore, is pointing toward using the term Roma Holocaust, occasionally in some Romanes adaptation, such as Holokosto or Holokausto.

The debates about what we call the Roma experience of persecution during the Nazi period and how we can capture it in a comprehensive narrative shows above all one thing: even 70 years after the defeat of the Nazi regime we, as a majority society, have failed to appreciate the fate of the Roma during this period and incorporate it into our commemorative culture.

The lack of a Roma tradition to pass on their history and culture in writing has left wider society attributing little value to their memories and experiences. It also meant that Roma have been treated as a marginal phenomenon, not worthy of being included in the overall historical memory. Their stories have remained largely unheard and unacknowledged. This ‘cultural forgetting’ of Roma history is an important reason why the European Roma, the largest ethnic minority in Europe, continue to suffer extreme poverty, a lack of employment opportunities, and face discrimination across areas including housing, education and access to health.

Commemoration is never an end in itself. In order to be meaningful commemoration needs to remember the past in order to shape our common future. If the Holocaust teaches us anything, it surely tells us loudly that when the human rights of one group are violated, no group can feel safe.