Johann ‘Rukeli’ Trollmann was born on 27 December 1907 near Hannover. He was a popular German Sinto boxer, who was discriminated against, marginalised, sterilised, and finally deported to a concentration camp, where he was murdered. Here, Rainer Schulze, Professor of Modern European History at the University of Essex, shares his story.

Europe’s Roma and Sinti were targeted by the Nazis for total destruction: historians estimate that between 200,000 and 500,000 Roma and Sinti people were murdered by the Nazis and their collaborators. Many more were imprisoned, used as forced labour or subjected to forced sterilisation and medical experimentation. In the early 1990s Roma scholar and activist Ian Hancock introduced the term Porajmos (also spelt Porrajmos), meaning ‘devouring’ or ‘destruction’ in some dialects of the Romani language Romanes, for the persecution of the Roma and Sinti during the Nazi period.

Johann ‘Rukeli’ Trollmann was born on 27 December 1907 near Hannover as one of nine children into a German Sinti family. He took up boxing at the age of eight, soon competing with the Heros-Eintracht boxing club in Hannover and going on to win four regional championships and a North German championship as an amateur boxer before he was 20.

Boxing was a hugely popular sport in Weimar Germany, and Rukeli became famous not only for his good looks, which turned him into something of a heartthrob at the time, but for his speed, agility and technical proficiency, devising his characteristic ‘dancing’ style in the ring which is now often regarded as the beginning of modern boxing. However, in 1928 he was denied a place in the German team for the Amsterdam Summer Olympics because of his ‘non-German’ boxing style. Undeterred, Rukeli moved to Berlin and turned professional, winning 29 of his 52 fights between October 1929 and May 1933. Yet with the rise of the Nazis, the right-wing media increasingly abused him as ‘the Gypsy in the ring’.

On 9 June 1933, Rukeli boxed against Adolf Witt for the German light-heavyweight title, which had been vacated by the Jewish holder Erich Seelig who had fled Germany in fear of his life. Rukeli was on course to win when the Nazi chairman of the boxing authority intervened, ordering the judges to call a ‘no decision’ and not award the title. This decision caused such an uproar among the audience that Rukeli had to be hastily crowned champion after all, but only a few days later he was stripped of the title again by the German boxing authorities because of ‘bad boxing’.

A new fight was scheduled for 21 July, and Rukeli was ordered to fight in the ‘German style’ and ‘not to dance like a Gypsy’. He knew he was meant to lose this fight because he was a Sinto. Rukeli entered the ring with his face and body powdered white with flour and his hair dyed blonde: a caricature of an Aryan and a courageous act of protest against his discrimination. He just stood still and took the blows of his opponent Gustav Eder until he was knocked out in the fifth round.

This marked the end of his boxing career. He struggled to fend for himself, was sent twice to Hannover-Ahlen labour camp and went into hiding for a time to avoid further persecution. In 1938, in order to avoid deportation to a concentration camp, he agreed to be sterilised under the ‘diagnosis’ of ‘congenital feeble-mindedness’. He divorced his non-Sinti wife in order to protect her and his little daughter Rita. Following the outbreak of war in 1939, he was drafted into the German army.

In 1942, he was dishonourably discharged from the Wehrmacht for racial reasons, along with all Sinti and Roma, and soon after arrested by the Gestapo, severely tortured and transported to Neuengamme concentration camp near Hamburg. The camp commandant recognised him as the former boxing star and ordered him to train the camp’s SS men at night following his punishing 12-hour work shifts. Because of his deteriorating health, the underground prisoners’ committee faked his death, provided him with a false identity and managed to get him transferred to Wittenberge, one of Neuengamme’s satellite camps. But here, too, he was recognised as the former boxer, and was made to fight Emil Cornelius, a feared kapo. Trollmann won against him, but in a brutal act of revenge Cornelius beat him to death with a club in March 1944.

Rukeli’s brother Heinrich ‘Stabeli’ perished in Auschwitz, but the rest of his immediate family survived labour and detention camps and forced sterilisation. After the war, Rukeli’s fate was not talked about, not even within his own family. A first step towards rescuing Rukeli from oblivion was a 1997 book about his life, but it was another six years until Rukeli’s great nephew Manuel Trollmann started researching his family history. In November 2003, the German Boxing Association finally recognised Rukeli as the winner of the 1933 championship fight and included him in their list of German boxing champions. His championship belt was given to his surviving relatives. Since 2004, there has been a pathway named after him in the centre of Hannover where Rukeli’s family home had been, and there are now also three Stolpersteine (stumbling stones) in Hannover, Hamburg and Berlin to commemorate Rukeli. 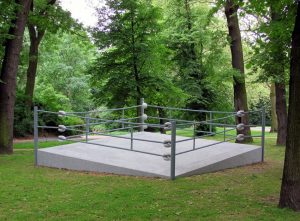 In 2010, a temporary memorial called ‘9841’ (Rukeli’s prison number in Neuengamme) was set up in his honour in Berlin’s Viktoriapark, in close vicinity to where the 1933 championship fight had taken place. A year later, researchers for a documentary film about Rukeli managed to find his daughter Rita Vowe Trollmann in Berlin, where she had worked as a pub landlady. Her mother had never talked about Rukeli, and she had only learned through her aunt who her father was when she was 15, at a time when anti-Roma attitude were still ripe in post-war society. She is now very proud of her father and actively involved in keeping his memory alive.