Nisad is from Prijedor in Bosnia. He was imprisoned in the notorious Omarska Concentration Camp with four of his brothers in 1992.

I was under arrest at a local school sports pitch, and there was a guard – a former desk mate from school and close neighbour – who ignored me when I clearly needed help. Yet there was a similar situation where another familiar face, someone I knew less well, chose to help me out.

Nisad was born on 30 April 1965 in Prijedor, a town and region in the north-west of Bosnia, (then part of Yugoslavia). A year later Nisad’s parents decided to move him and his 10 brothers and sisters to a village called Kevljani, a few kilometres from the town of Prijedor. His father worked on the railway, along with three of his brothers, whilst his mother stayed at home. Nisad and his siblings were pupils at the secondary school in Omarska. Growing up, Nisad remembers Kevljani as a diverse community of Bosnian Muslims (known as Bosniaks) and Serbs. Nisad and his family were Bosnian Muslims, and he remembers everyone lived alongside each other with little conflict or tension.

Nisad studied geology for four years, but after being unsuccessful in finding a job, as was the case with many young people at the time, he moved to Croatia to work as a labourer.

Nisad regularly returned home to his family in Kevljani, but in the 1990s, there was a civil conflict and war in the region, and Yugoslavia began to be broken up into separate countries. Bosnia declared its independence in 1992, which was resisted by the Bosnian Serb population, who were fighting for ‘Republika Srpska’ – an independent Serbian state in Bosnia. This led to conflict between Bosnian Serbs and the rest of the population, particularly Bosniaks, who were targeted and persecuted by Bosnian Serb troops.

During one of his trips home, on 30 April 1992, Nisad’s 27th birthday, the Prijedor region was taken over by Serbian paramilitary forces. Most people in Prijedor, including those in Nisad’s village of Kevljani, had children and were poorly armed. They had no choice but to surrender. The Bosnian Serb forces arrested Nisad and imprisoned him at a local school sports pitch. It was here that Nisad recalls being ignored by a man who he knew well, his deskmate at school for four years, who followed the crowd and refused to show any connection with him when he needed it the most. But he also remembers being helped by someone he barely knew, who was not Bosniak, but still tried to help Nisad by telling a soldier to leave him alone.

Nisad and four of his brothers were detained in the notorious Omarska Concentration Camp because they were Bosniaks, until 6 August 1992. He has memories of his brother telling him to wear a black T-shirt so that he would stand out less and avoid being beaten.

Conditions in Omarska were horrific, and detainees were treated inhumanely, with people being beaten and killed every day and night. In the 72 days that Nisad was imprisoned there, he lost a staggering 21 kilograms (46 lbs). In August 1992, British journalists Penny Marshall, Ian Williams and Ed Vulliamy gained access to the concentration camps at Omarska and Trnopolje, where they gathered footage of the conditions. Although only the healthiest looking prisoners were allowed to be filmed in an attempt to cover up the atrocities taking place there, the footage clearly showed how badly the prisoners were treated. This inhumane treatment of Bosnian Muslims and Croats was broadcast to the rest of the world and the Serbian forces found themselves under international scrutiny. Omarska was closed and Nisad and three of his brothers were moved to Manjaca Concentration Camp, whilst their eldest brother was sent to Trnopolje Concentration Camp. A few months later Nisad was transferred to a detention centre in Croatia where the Red Cross were working to contact family members in other countries. 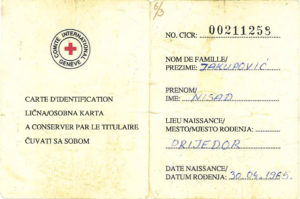 In February 1993 the United Nations High Commissioner for Refugees (UNHCR) allowed Nisad to move to the UK, where one of his brothers, Sabit, was living. Nisad was faced with the challenge of living in an unknown country with few contacts and being unable to speak English. Nisad and Sabit were joined by two more of his brothers, one of his sisters and their parents, while his youngest brother moved to Canada.

Nisad got married in 1995 to the daughter of another survivor of a concentration camp, and he has two children. After studying at Kingston University in London he now works as a civil engineer. He has also had some of his poetry published in Bosnia.

Nisad wants to share his story to make sure that people never forget what happened in Bosnia in the early 1990s.