Iby Knill recounts her experiences during the Holocaust. 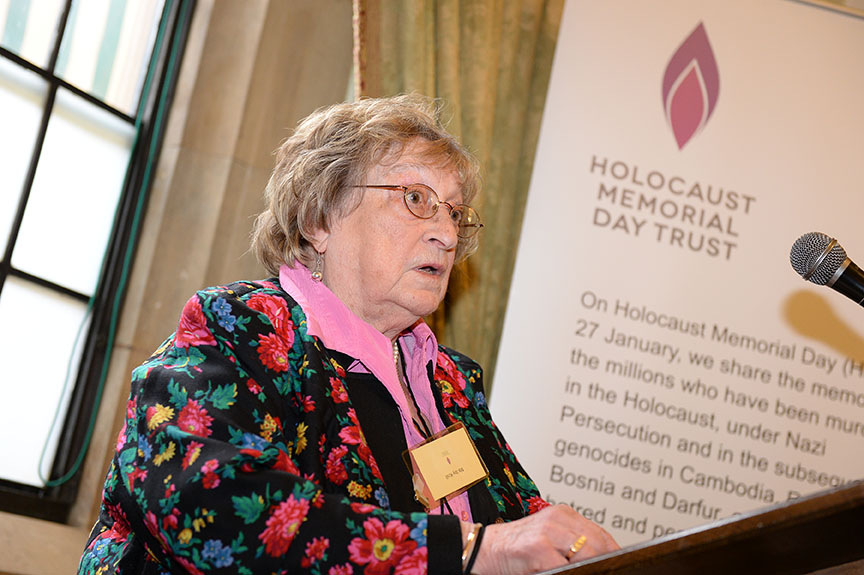 The views expressed in this podcast are those of the individual contributor and not necessarily those of HMDT.

Where and how did it start? One day Gretl,  my school friend, we had shared a desk, greeted me with an embrace.  The next day she ran across the road and turned her head away so as not to acknowledge me.  I wanted to call out, but turned my head away – in embarrassment, shamed, but not ashamed.  Neither of us had changed in that short space of time – or had we?  The only thing different was that I was now stigmatised, visibly differentiated, marked with a yellow star on my left breast.  But that was on the outside.  Under the coat, under my skin I was still the same person.  I was angry, very angry and that anger stayed with me throughout the next years, through[out] persecution, torture, imprisonment, humiliation.

It’s now no longer safe to stay here, if you are a girl and wear a yellow star.  So one cold February night I and my guide crawl across the frozen no-man’s land from Slovakia into Hungary.  My destination; my aunt in Budapest.  She is a little, timid person and harbouring illegal immigrants is a punishable offence.  She is frightened and panics.   Marton, my cousin comes to the rescue:  ‘I’ve had girls staying overnight before, you’ll just be my more than occasional girlfriend.  But in the daytime don’t move about – the walls are thin, the neighbours may hear you.’

It’s very cold in the empty flat.  Marton is called up for Labour service – the alternative to military service for Hungarian Jewish men – so I am passed on to someone else to look after me, to help others escape.  Many people are involved, so it is not surprising I’m captured, along with 428 others.  The investigators are not exactly kind, they feel they have to get admissions of guilt, one way or another.

After a time at the police station I spend three months in prison, investigations continue on a weekly basis.  Eventually I am told that they are going to let me go with a warning, but on leaving the prison I am arrested as an illegal immigrant.

And so the merry-go-round continues detention centre, immigration centre, eventually a refugee camp in the north of Hungary.

They realise I am no danger to them, after all, and after a year or so I am allowed out on parole, have to report to the police every week, stay where I’m sent – in a little town in Hungary where there is a distant family connection.  My designation – illegal immigrant – a political prisoner on parole.

Spring 1944; the Germans occupy Hungary and things change dramatically.  Yellow stars are imposed, but that does not apply to me, I’m a political prisoner, a different category – but will this make any difference?

At dawn on 6 June 1944 – D Day – they round up all the Jewish people.  But there is a rumour, the Allies have landed, it won’t be long before they are here – just hold on, just hold out.  There is hope.  The policeman, to whom I had reported on the previous day, says ‘you should not have been there.  I had asked you to spend the night with me there is little I can do now.’  But, after taking everything of value I have, including my papers, he marks on the list my name, date of birth, profession: nurse, status: political prisoner.  He can’t do more – he could have done less.  But only years later do I find this out when I see the list, did it make a difference?

In one bay of the brickyard an improvised hospital.  Women with new-born babes, people with wounds and scars, the insane wandering about, the sick moaning and crying.  I go to help – there are so few of us, most people have joined their families.   There is little we can do.

After a few days a train with cattle wagons appears.  The sick are put in the last wagon with us, a few doctors and helpers.  One bucket with water, one bucket for human waste.  On the second night of our journey an elderly doctor crawls over to me: ‘Please let me hold you, because I know that I’ll shall never again be able to hold, to embrace anyone.’  We hold each other closely.  Maybe it is the last time I’ll hold someone.  He seems to know where we are going – I don’t.

The train stops, men with shaved heads in striped pyjamas, open the doors:

‘schnell, schnell, raus, raus.  Leave the sick, leave the old, leave the children.  Men to the right, women to the left’.  A collective moan from the patients – arms are stretched out, pleading.  But there is no time, there is nothing we can do.  There are five of us women; the doctor has grey hair – we tie a scarf over her head, jump out of the wagon, link arms, her in the middle; absolutely crazily singing the Hungarian National Anthem ‘God bless the Hungarian with plenty and goodness’ we march up (to) and past Dr. Mengele, who roars with laughter, points his stick as he send us through the gate, which proclaims Arbeit macht frei : Work gives you freedom.

We have arrived in Auschwitz Birkenau on 17 June 1944, the day which was to be my wedding day.

There is nothing about Auschwitz-Birkenau that you have not heard before –so why tell it again, why agonise about something that can’t be changed?  Why should I tell you – you have heard it before – of the dehumanising indignities inflicted on us, the way the weak, the sick, the unstable and unable are gradually eliminated, the stench of the crematorium, the soap made from human ashes, the lampshades made of human skin?  However hard I try, these are images that cannot be eliminated, even if they are buried, at times and for a time.  Yet, against all the odds, we still hope.  We hope we’ll survive – somehow.

I hadn’t changed – and I was not going to let them change me.

At the end of July we five, doctors and nurses, volunteer to go with a slave labour transport.  If you get away from Auschwitz-Birkenau you have a chance to survive.  With 500 Hungarian women we go to Lippstadt, in the Ruhr, to an armament factory.   My knowledge of German lands me in charge of the Revier – the camp hospital.  250 more women join us in the late autumn and bring typhoid with them.  We nurse them in an isolation camp.  Most survive, we only have eight deaths altogether in the period – although we have hardly any medication.  Miraculously three babies are born in the camp.  We hide the mothers and the babes.

By now air raids are nearly continuous.  We are taken into the town to help with the removal of rubble – how much longer do we have to wait?  But now we feel that our hope must be soon realised.  Toward the end of March, the factory falls silent.  A train arrives in the siding and we are told to put all the sick, the weak and the mothers and babes in – they will be taken to ‘safety’ – to Bergen-Belsen.  We will have to walk there.

We walk at night, are hidden in the daytime in barns; we hear air raids, we feel as if we were going round in circles.  If anybody lags behind, a soldier gets detached, you hear a shot, the soldier comes back, and the person doesn’t.

Then one day there are no barns, we are told to lay down in the fields, the guards lie in the ditches.  We hear church bells ringing, see the white sheets hanging from upstairs windows.  We hear the rumble of tanks, see them in the distance, covered in pink sheeting – the Americans have arrived!  My comrades run screaming towards them, surround them, catch our guards and lock them in the church crypt.

I crouch by a ditch, unable to move.  I’m taken to a nearby farmhouse, lie on a wooden settle.  Grandfather, mother and child sit at the table.  The little girl comes carefully towards me, holds in her hand a brown egg and offers it to me.  ‘It’s Easter Sunday’ she whispers, runs back to her mother and hides behind her apron.

It took me 60 years before I could talk about this nightmare.  I had locked those years away, good memories as well as bad ones and lived a normal life.  I didn’t think I would ever talk about it.  But then something happened and I had to stand up and own up to my past.  Why did I survive, when so many died?  I still don’t know the answer.  Perhaps I survived – to bear witness, to tell the tale – hoping people would listen.  Have humans learned from our experience? I don’t know.  I hope that they have.

Because I had not changed – I was not going to let them change me.

But I was there.