Helen was only twelve years old when the German army arrived at her home. She was one of around only 750 people to be liberated from the Łódź Ghetto, out of 250,000 people sent there. Her mother and brother survived with her, but her father was murdered at Chełmno.

You can download a PDF version of Helen Aronson’s easy to read life story here.

Jewish: People who follow the religion of Judaism.
World War Two: A large war fought in Europe from 1939 – 1945.
Synagogue: A building where Jewish people meet for religious services and study.
Discrimination: Treating people unfairly because of who they are.
Ghetto: A small area in a town or city where Jews were forced to live all together. They were not allowed to leave. The ghettos became very crowded with lots of families living in the same flat or even the same room.
Orphanage: A place which cares for children with no parents.
Nazi Party: The group who were in power in Germany from 1933 – 1945, led by Adolf Hitler. They thought people who were ‘Aryan’ (white skin, blond hair, blue eyes) were better than all others. They wanted to kill people from other groups who were different from them, such as Jewish people.
The Holocaust: The attempt by the Nazis to kill all the Jews in Europe.

Helen Aronson was born in Poland in 1927. Helen’s family was her father, Motush, her mother Frania, her brother Henry, and her sister Marlya. They were Jewish and had many Jewish and non-Jewish friends. Helen’s sister moved away from Poland.

Helen was 12 years old when World War Two started in 1939. The German army, led by the Nazi Party, invaded Poland. The German soldiers in Helen’s town burned down the synagogue, and treated Jewish people badly. This was because they hated Jews and blamed Germany’s problems on them.

When someone is treated differently because of who they are, this is discrimination.

In February 1940, Helen and her family were forced to leave their home. They had to move into a ghetto. Life was terrible in the ghetto. Helen’s family had to work hard, without enough food to eat. Everyone lived in small, overcrowded spaces.

In May 1942 everyone from the ghetto was told to go to the local football stadium. It was a confusing and terrible time for Helen. German soldiers shouted at her family, and threatened them with barking dogs. She was separated from her father. She and her family were tested. The test was to see if they were strong enough to work for the Germans. German soldiers forced Helen, her mother and brother onto a train. Helen and her family did not know where the train was going. 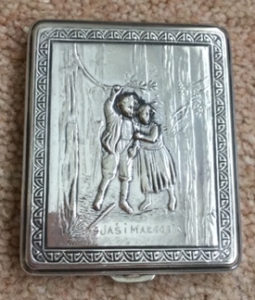 When they got off the train Helen, her mother and brother were in a big city called Łódź (pronounced wooj). In the city there was a big ghetto. Helen and her family were forced to go there after they left the train.

They still did not know where Helen’s father was. Helen was sent to work in an orphanage. Living conditions in the new ghetto were even worse than before. Many people living in this bigger ghetto starved to death, or died of disease.

Helen’s brother, Henry, got very sick with a disease called typhus. Many people who caught typhus died. Luckily, Henry got better and survived.

Helen’s brother gave her this make up case made of silver for her 17th birthday in April 1944. She still has it today. It is very precious to her.

By May 1944, there were 75,000 Jews left in Łódź. The Nazis decided to murder nearly all of them. This was part of their plan to kill all the Jews in Europe, called the Holocaust. Six million Jews were murdered by the Nazis under this plan.

Helen, her mother Frania, and her brother Henry survived because Henry worked in an important job for the German army. They all stayed in the ghetto to carry on working.

In January 1945 Helen’s family heard the Russian army were close to the ghetto. The Russians were fighting against the Germans in World War Two.

Helen, her family and others hid in an underground room. After about a week, they came out and met Russian soldiers. The soldiers told them the war was over and they were free.

After she was told about the end of the war, Helen looked for her father. Sadly, she discovered he was dead. In May 1942 when her father was separated from Helen’s family, he had chosen to go with a group of young children who had no parents. He wanted to look after them. He and all the children were murdered by the Nazis during the Holocaust.

Helen is proud of her father’s choice, saying, ‘He is my unsung hero’.

Helen was very sad when she found out about her father’s death. After the war she visited her uncle in London. There she met her husband and fell in love.

However, Helen’s new life was not easy. Helen’s mother and brother moved abroad, and Helen missed them. It was very difficult for her to learn English. Helen also felt no-one was interested in her experiences during the Holocaust.

Helen began to share her story in the 1990s with schools and local groups. She has two daughters and two grandchildren.

Image: For her 17th birthday in April 1944, Helen’s brother gave her a silver powder compact which she still has today, and says is her most precious possession.

You can read the full life story of Helen Aronson, suitable for secondary school students and adult audiences, here.