Despite being both gay and Jewish, Gad Beck survived the entire duration of Nazi rule living in Berlin. He was 19 when, in 1941, his friends and neighbours began to be rounded up and deported. He made the decision to actively resist Nazi persecution, assuming a leading role in the Chug Chaluzi Jewish resistance group.

‘Gad, I can’t go with you. My family needs me. If I abandon them now, I could never be free.’ No smile, no sadness. He had made his decision. We didn’t even say goodbye. He turned around and went back. In those seconds, watching him go, I grew up.

Gad Beck describing the moment his lover Manfred Lewin chose to return to his family, to be deported to their deaths at Auschwitz

Gerhard Beck and his twin sister Margot were born in Berlin in 1923. His father was a Jewish immigrant from Austria; his mother had converted to Judaism. He described his mixed family background:

‘Such a devoted, open, and serene form of Christian-Jewish ecumenism, full of good-heartedness, could have forged new directions for Central European culture if Hitler had not destroyed it all.’

That world ended suddenly after the Nazis assumed power in 1933, when Gerhard was nine. Within a year he had left his school because of antisemitic bullying; within three years he had been forced to leave school altogether because his family could not afford the fees; and by 1938 the Beck family had been forced from their home into a poorer part of the city designated for Jews. After Kristallnacht in November 1938 Gerhard had to clear up the clothes shop he worked in after it was ransacked, vandalised and soiled by Nazi thugs.

The ever-increasing levels of persecution caused Gerhard to carefully consider his Jewish identity and to join Zionist youth groups which aimed to help Jews make the journey to a new life in Palestine. To assert his Jewish identity Gerhard started using the Hebrew name ‘Gad’. In 1940 he was due to join a ship of Jewish émigrés, but fell ill and missed the opportunity. However his connections to Zionist activists were the starting point for his resistance activities.

In September 1941 Berlin’s Jews were forced to wear the yellow star, and the first deportations ‘to the east’ began.

‘The Jewish youth leadership found out that deportations of Jews were to begin shortly from Berlin, as they had already started in other areas of the Reich. The official Nazi terminology was ‘migration’ or ‘evacuation’ to ‘work camps’ in the east.

In the beginning old passenger trains were used; later it was freight or cattle cars. The terrible Nazi term ‘transport’ was truly fitting.’

Nathan Schwalb, a Zionist coordinator in Switzerland, had already learnt that the Nazis were carrying out genocide:

‘Nathan warned us in a letter not to comply with the order to “migrate”; he knew already that the Nazis had begun systematically murdering the Jews.’

By this point Gad had started a relationship with Manfred Lewin. Both of Manfred’s parents were classified as Jewish by the Nazis, resulting in the Lewin family receiving their lists – instructions for deportation – in 1942. In a risky attempt to save Manfred, Gad borrowed a Hitler Youth uniform and persuaded the assembly camp commander that he needed Manfred for a short time. The lovers walked out together, but Manfred explained to Gad that he was unable to leave his family. Manfred returned to the detention centre, to deportation, and to death at Auschwitz. 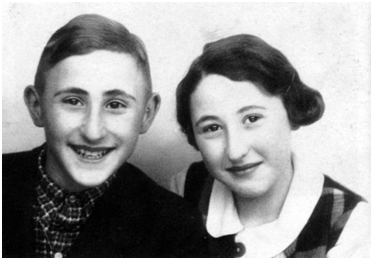 By 1943 most of Berlin’s Jews had been deported, and mischlinge (people with mixed Jewish/ non-Jewish background) like Gad were vulnerable. In February 1943 Berlin Nazi Party leader Joseph Goebbels launched an ‘operation’ to complete his ambition of making Berlin judenrein – free of Jews. Gad was summoned to a building at Rosenstrasse. He and other mischlinge were held for several days, before protests by the non-Jewish wives and families of the captives caused the Nazis to lose their nerve and release their relatives.

Having escaped deportation because of the protest at Rosenstrasse, Gad’s resistance activities stepped up. He assumed a leading role in Chug Chaluzi, a Jewish resistance group linked to a European network coordinated from Switzerland. Gad ranged over the city, arranging safe houses, delivering money, and assisting Jews in attempts to escape Germany.

Despite the Nazi regime’s persecution of gay people Gad believed his homosexuality assisted his resistance activities:

‘As a homosexual, I was able to turn to my trusted non-Jewish, homosexual acquaintances to help supply food and hiding places.’

It wasn’t until March 1945 that Gad was betrayed and arrested by the SS. He had evaded the transports eastwards, but had to survive over a month’s captivity to outlive the war:

‘The last train to Auschwitz had departed on January 5, 1945, as I later found out, and in March the last transports to Sachsenhausen, Ravensbrück, and Theresienstadt took place. Would they shoot us? Or had we meanwhile become important enough to them for the time ‘afterwards’?’

Gad and his boyfriend Zwi were liberated from prison by the Red Army on 24 April 1945. His parents and twin sister had also survived the war in Berlin. Gad’s reputation had reached the Soviet forces, who appointed him as a Jewish Representative for Berlin. However, Gad decided to move westwards to the Allied displaced people’s camps, from where he planned to make his journey to Palestine.

He worked to organise Jewish emigration to Palestine, against the wishes of the British authorities, and made the journey to Palestine himself in 1947. Gad fought in the war which resulted in Israel’s creation in 1948. He built a new life and lived happily in Israel for several years, before deciding to make a journey of return to central Europe. He became the Director of Berlin’s Jewish Adult Education Centre and a prominent gay activist. Gad felt it was his mission to return, to complete his resistance by rebuilding Jewish and LGBT life where the Nazis had tried to eradicate them.