Mukesh was born in India in 1955. Aged sixteen he won a scholarship to study in England at Wellington College. He became attached to the country and after finishing school, went on to study at Oxford University, qualified as a doctor, and became a British citizen. 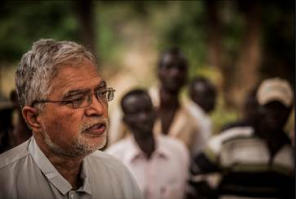 In 1994 Mukesh went to work for the British Government delivering humanitarian and development aid around the world. In this capacity, he was part of the first British team to go to Rwanda after the genocide there. This role also took him to Bosnia where he witnessed the aftermath of the genocide in Srebrenica.

In 2003 Mukesh was appointed as the UN Resident and Humanitarian Coordinator for the Sudan. Within months of being in post, he began to get reports of violent clashes between rebels and the Sudanese military in Darfur. Civilians were fleeing villages on a large scale. Families of refugees began to arrive in Khartoum having made the 1,000 kilometre journey from Darfur by foot or by hitching lifts on trucks.

Concerned about the situation in western Sudan, Mukesh took a four hour flight to El Fasher and Nyala, two important urban centres in Darfur. Visiting hospitals and refugee camps he noticed that the injured were all civilians and were suffering almost exclusively from gunshot injuries. He heard accounts of attacks on villages being carried out by nomadic Arab militias known as the Janjaweed. Mukesh remembers hearing the most disturbing testimony of mass rape from a lady in Nyala: ‘she said, “in the middle of the night, the raiders came. People were rounded up and marched out of their huts, which were set on fire. The raiders lashed us with their whips and beat us with sticks, and drove us out of the village…. but the worst thing is that some of the young women from the village are missing… we fear very much what is happening to those women and girls. Some of them are very young, just children.”’

After travelling to Darfur, Mukesh then embarked on another journey. This time he went to the major world capitals including London, New York and Washington DC. His purpose was to tell the stories of the people of Darfur to world governments.

On his return to Sudan, Mukesh decided to go back to Darfur to collect more evidence of the atrocities and establish how much the Sudanese Government was supporting and arming the Janjaweed. Whilst flying into Nyala, Mukesh saw for himself the systematic campaign to destroy Darfuris by burning their villages: ‘on the distant horizon, I caught what looked like smoke from a barbeque, rising into the hot air… As the aircraft grew closer, I could make out the distinctive orange glow of a fire ranging at the base of that column of smoke. …. and as I gazed downwards I could see that each was a village hut in flames.’

He also went to a camp where displaced villagers were seeking refuge, describing it as ‘a sprawling expanse of makeshift shelters and tents set in the baking hot scrub….[and] there were thousands – probably tens of thousands – of displaced people, and all were noticeably black African.’

Despite sending a report on the situation in Darfur back to the UN, the international community remained silent. Desperate and infuriated, Mukesh decided to draw the attention of the media to Darfur and gave a live interview to the BBC: Darfur was the world’s greatest humanitarian crisis happening at that time; it was a human rights catastrophe on a par with the Rwandan genocide; and the Sudanese Government was responsible.

Following Mukesh’s interview with the BBC, a formal UN inquiry was set up which found evidence of crimes against humanity and war crimes, including acts with genocidal intent. Peacekeepers were despatched and Darfur was referred to the International Criminal Court, which went on to indict several members of the Sudanese Government including the President, Omar Al Bashir.

Mukesh decided to speak out about Darfur because he did not want to be a passive witness to genocide. He believed he had a responsibility to tell the stories of the people of Darfur to the world: ‘whatever it took, I would stand against those who would allow the killers to prevail in Darfur. I would stand against those who called for a final solution.’ He was also influenced by his memory of the aftermath of the genocides in Rwanda and Bosnia: ‘reading reports from Darfur, I was reminded so powerfully of Rwanda and Srebrenica.’

After he spoke out on Darfur, Mukesh lost his job at the UN and had to leave Sudan. He also received many death threats which continued for many years.

He now lives in the UK and is a professor of global health and humanitarian affairs at the University of Manchester. He continues to work to bring the world’s attention to the suffering of the Darfuri people, both in Darfur and in refugee camps in Chad. He regularly travels back to the region and is a Special Representative of the Aegis Trust for the prevention of crimes against humanity.

The stories of people, like Mukesh, who witnessed the Genocide in Darfur are very important. At least 300,000 were killed and there are still 2.7 million internally displaced people living in camps across Darfur and a further 300,000 Darfuri refugees living across the border in Chad. It is very difficult for survivors of the Genocide to tell their stories; most are still struggling to survive and rebuild their lives.

You can download an 'easy read' version of Mukesh's life story

With thanks to Aegis Trust.