Thousands of people across the country watched the UK Ceremony for Holocaust Memorial Day (HMD) 2022 and joined parliamentarians, faith leaders and their friends and neighbours to light the darkness. 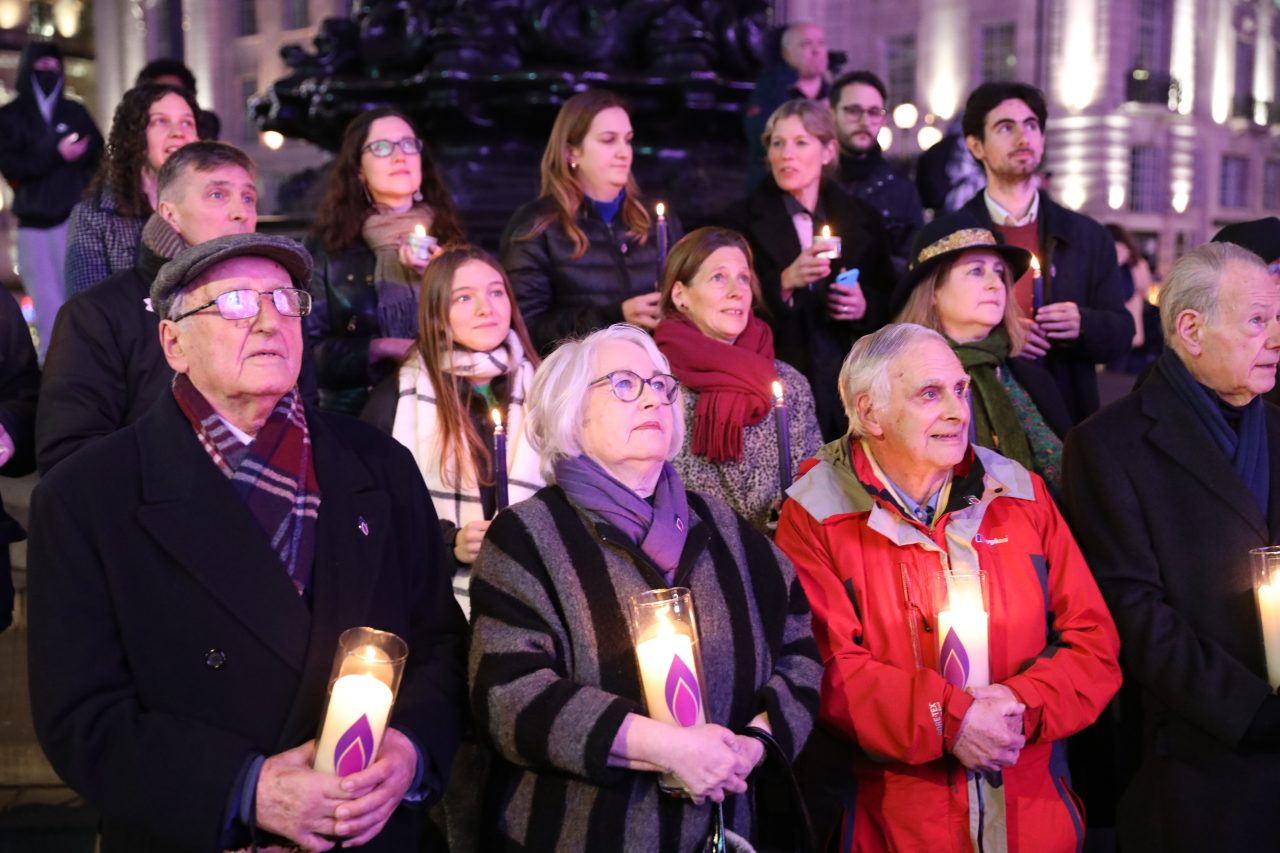 Image: Survivors of the Holocaust and their friends and family watch the Piccadilly Lights light up for HMD 2022

The UK 2022 Holocaust Memorial Day Ceremony was streamed online for the whole nation to watch.

The Ceremony was narrated by broadcaster and writer, Sandi Toksvig OBE. Audiences heard powerful testimony from survivors of the Holocaust and genocide.

Sir Trevor McDonald, The Archbishop of Canterbury, as well as members of the public from all corners of the UK featured in the Ceremony as listeners, and flame keepers, to their testimonies.

Our Patron, HRH The Prince of Wales reflected on this year’s commemorations:

The theme for this year’s commemoration – One Day – calls on us to remember momentous days in our own lives, or in times gone by, which have impacted the arc of history, either for good or for ill. It reminds us how quickly life can change, and that, though we know much, we will forever live with the uncertainty of not knowing what tomorrow may bring.

The strength shown by the survivors of the Holocaust, and of more recent genocides, is as courageous as it is inspiring. Like anyone who hears them bear witness on Holocaust Memorial Day, I am always moved and forever changed by their testimony.

The Ceremony ended with a national moment to ‘light the darkness’ at 8pm. Holocaust and genocide survivors from the Ceremony were joined by people across the UK, in lighting candles and placing them in their windows to:

#HolocaustMemorialDay trended on twitter throughout the day, as people shared messages of hope and content about their HMD activities. During the Light the darkness national moment, social media news feeds were full of photos of candles. You can see a collection of tweets from the day below.

Yesterday, hundreds of thousands of people came together on #HolocaustMemorialDay to learn more about the past and take action to create a safer future.

Here is a collection of tweets that show how people in the UK marked #HMD2022.https://t.co/iAUn728tOJ

The BBC aired a documentary at 9pm on HMD, about a project commissioned by HRH The Prince of Wales, for portraits of seven Holocaust survivors to be painted by seven leading artists. We are delighted to have helped facilitate the project, which is now on display at Buckingham Palace.

See photos of the day in our gallery at the bottom of this page, and watch highlights from the Ceremony below.