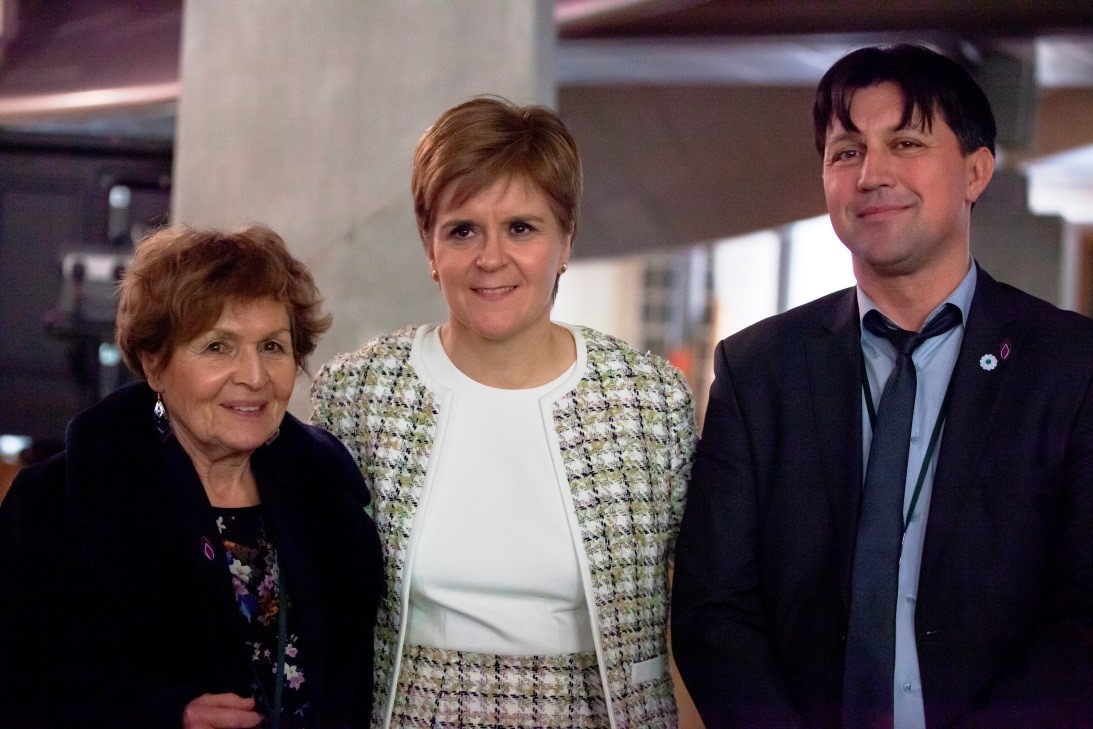 The First Minister of Scotland, Nicola Sturgeon, welcomed to the Parliament Janine Webber, survivor of the Holocaust, and Hasan Hasanović, survivor of the Genocide in Bosnia. Both told their remarkable and moving stories to a Parliament packed with guests from across Scotland.

Hasan Hasanović, survivor of the Genocide in Bosnia, said:

After the Holocaust the world said never again and yet we have had the genocides of Cambodia, Rwanda, Bosnia and Darfur and places, right now, on the brink of genocide. We said never again and yet the Srebrenica genocide happened and it happened on European soil. We must never rest until such ideological hatreds are completely eliminated from human hearts. I thank Scotland from the bottom of my heart for giving me so many opportunities to share my story.

This year is particularly poignant as we observe the 75th anniversary of the liberation of Auschwitz and 25 years since the genocide in Srebrenica. The theme for this Holocaust Memorial Day – Stand Together – highlights the importance of our collective societal responsibility to stand against hatred and prejudice and to promote strong, inclusive and respectful communities.

The commemoration in Scotland also included a digital exhibition of The Children of Buchenwald, created collaboratively by the pupils of Bellahouston Academy and two schools in Rostov on Don in Russia.

One of the highlights of the evening in Parliament was the playing of the specially commissioned music Unforgotten, written and composed by Oleg Ponomarev, a Russian Jewish Gypsy and world famous musician, and Lev Atlas from the Royal Conservatoire of Scotland. The music was performed by pupils from the Glasgow strings orchestra and included a young Armenian musician playing the traditional Armenian Dudek.

For the first time in many years, HMD ceremonies in England, Scotland, Wales and Northern Ireland are taking place on the same day, which is particularly symbolic given this year’s theme: Stand Together. The significant milestone that we collectively mark is made especially poignant by the dwindling number of survivors of the Holocaust who are able to share their testimonies. Their experiences are vital reminders of the way in which genocidal regimes throughout history have deliberately fractured societies and divided communities. By joining us here today, you are standing together with people still facing prejudice and hostility, and I thank you for your support.