HMDT was privileged to hear Mukesh Kapila of the Aegis Trust speak about the ongoing crisis in Sudan. Mukesh was United Nations Resident and Humanitarian Coordinator of the UN in Sudan between 2003 and 2004 and witnessed the start of the Genocide in Darfur.

Mukesh attempted to speak out diplomatically but found that the world would not listen. In the end he was forced to tell the story as he knew it, to anyone who would listen and found the international media to be the only effective channel. 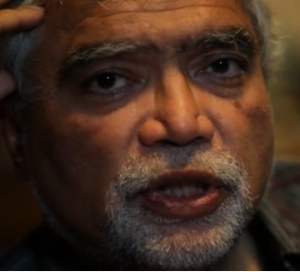 Last night’s talk focused on the situation in the Nuba Mountains, an area in South Kordofan, on the border between Sudan and the newly independent South Sudan. Home to the Nuba people, the Nuba Mountains are an extremely remote area where civil war has been ongoing since the 1980s. The region had always fought against the repressive Arab Islamic regime in Khartoum whose vision of Sudan is one that does not offer equality for its non-Arab and non-Islamic citizens. The Nuba people have stood beside their southern black African and Christian neighbours. The creation of an independent South Sudan in July 2011 seems to have left the region behind in their peace negotiations.

The atrocities in the region began in June 2011. Ahmed Haroun, an indicted war criminal previously involved in the atrocities in Darfur, was elected to govern the South Kordofan province. Since then the Nuba people have experienced heavy artillery from the Sudanese Government. According to Mukesh, the use of aerial bombardment, cluster bombs and illegal anti-personnel mines by the government to attack civilian settlements has been targeted and frequent. There is also evidence of a scorched earth policy by which government troops burn crops and grains, ruining harvests and creating infertile land. Most of the Nubans are part of very poor farming communities and over one million people are facing growing food shortages. To make matters worse the wet season is also on their way which means that the remote communities will be completely cut off. So far tens of thousands of Nubans have fled into South Sudan and hundreds of thousands are now internally displaced.

Mukesh suggests that technological advances in weaponry being used in the Nuban Mountains already create a very dire situation, stating ‘this is not just a repetition of Darfur; it is Darfur but more efficiently conducted’. The government’s response is that they are not targeting civilians but rather fighting an insurgency and civilians are caught up in the conflict. However the government still refuses humanitarian aid to the Nuban people. They deny that there is a need for assistance and by denying humanitarian access to its citizens they are committing crimes against humanity.

Beyond the Nuba Mountains, the situation in Darfur continues. Many Darfuris are stuck in border refugee camps, unable to return to their homes because of continued attacks and are denied humanitarian access into Chad.

Mukesh believes that attacks will continue in Sudan until the underlying causes of the violence are addressed. He argues that firstly there needs to be justice and accountability. President Al-Bashir was indicted for crimes against humanity by the International Criminal Court, however justice and an arrest has not yet followed. He also suggests that the people of Sudan cannot begin to move past their history without a regime change; principled international engagement in the peace process between Sudan and South Sudan; extremely downgraded diplomacy between western powers and the fugitive Al-Bashir; and severe sanctions against those leaders who facilitate or promote arms trade with Sudan.

Mukesh left us with the thought that we ought not to view the issues as so complex and entrenched as to be insurmountable. Every international decision made in relation to Sudan is made by individuals, not governments or organisations, and we all have the ability to make a difference to these individuals either by writing to our diplomats urging sanctions against Sudan or urging others to become involved using social media.

Sources:
Is Sudan committing another genocide – against the Nuba people?