In April 2016, a group of staff members from HMDT went on a learning trip to Poland. Over three days, they visited Kraków and the site of the Kraków Ghetto, Oświęcim and Auschwitz I and Auschwitz-Birkenau concentration camps. This is the first of three blogs written by staff about their experiences on the trip. 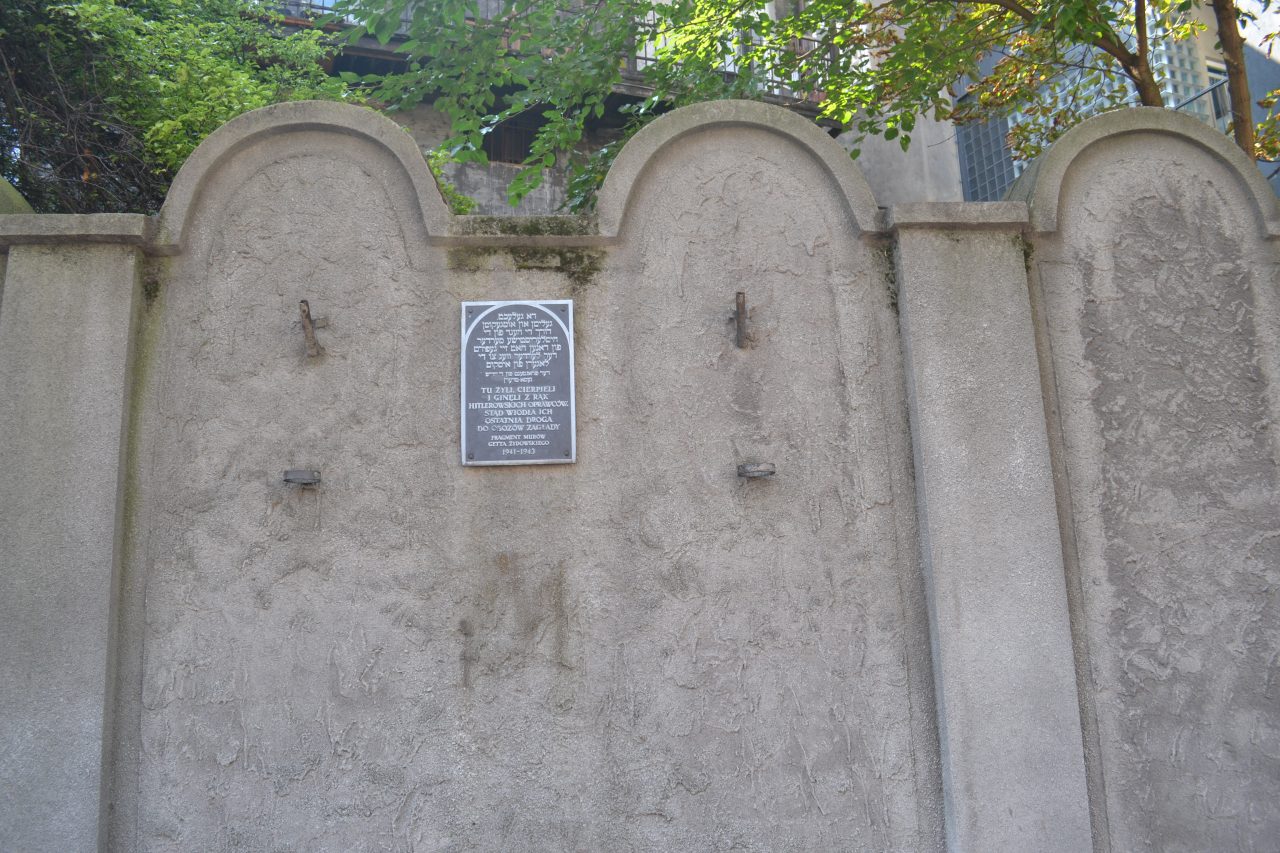 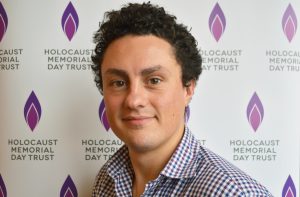 Over the past few years I have been fortunate to meet a number of inspirational men and women who survived the Holocaust. I have heard stories that I will never forget told by people I will always remember. These stories are powerful and emotionally challenging and have helped to shape much of my understanding about that darkest of times in human history. Each story of survival is different, each experience unique, yet each story shares one important aspect with the others. The person telling it survived.

These stories of survival are in part stories of the Nazi failure to achieve their wretched aims, their failure to wipe out the European Jews. However our trip to Poland last month was a stark reminder that survival was the exception, that perhaps by their own despicable measure the Nazis, alongside those who collaborated with them, were remarkably successful in achieving their abhorrent vision. 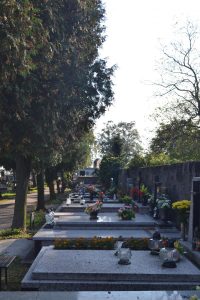 During our trip we saw the destroyed and overgrown Jewish cemeteries next to their pristine and beautifully kept Catholic counterparts. We notice the gaps on door frames where the mezuzot had once been affixed. We stood on sites where synagogues once stood but were no longer. We visited the site of the Kraków Ghetto and saw the coffee shops, hairdressers, businesses and homes now flourishing where Jewish men, women and children were murdered. This was not a story of survival, but the story of the complete removal of a people from the communities that they had once been a major part of.

Of the over three million Jewish men, women and children who lived in Poland before World War Two, as few as 45,000 remained by 1950. This number was further reduced during the Soviet era as anti-Zionist purges, antisemitism (anti-Jewish hatred) and religious intolerance forced most of those who remained to either flee or to hide any Jewish heritage. It is estimated today that there are only around 20,000 people left in Poland with Jewish roots.

These statistics are terrifying. Poland, a country with such a rich Jewish heritage came so close to losing its Jewish community entirely. The culture of those who were murdered was so nearly completely destroyed, not just by the Nazis but by those who came after them and who consolidated what they had started.Yet we did not come away from the trip believing the plight of the Jewish community in Poland to be hopeless, in fact we found a community today full of optimism and growing in confidence. 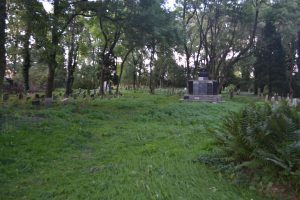 In Kraków, where Europe’s largest Jewish cultural festival attracts thousands of visitors each year, we saw busy synagogues that had undergone major restoration, we visited the fantastic Galicia Jewish Museum and ate in Jewish restaurants. This is a story of revival mimicked across Poland. Young people are increasingly keen to investigate and learn about their Jewish roots. Jewish cultural centres and museums have sprung up in towns and cities across the country. Yiddish and Hebrew are growing in popularity and some Poles have taken it upon themselves to take care of some of the previously destroyed Jewish cemeteries.

I hope that the next decades see further acceptance and celebration, not only of the Jewish community in Poland, but also of other groups that suffered at the hands of the Nazis. Poland’s population should be proud of how far they have come since the end of Soviet rule and redouble their commitments fighting antisemitism, anti-Roma hate, and all other forms of identity-based intolerance.Perhaps today the relics of the pre-war Jewish community are not just the final evidence of a community lost, but also defiant symbols of a community that could not be destroyed and after so many years is now able to rebuild. 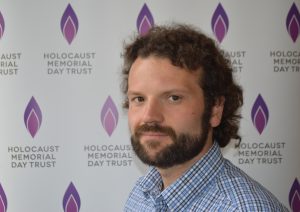 When the German army marched into Poland in September 1939 around three and a half million people, ten percent of the population, were Jewish. For over nine centuries Poland had been paradisus Iudaeorum, ‘paradise for the Jews’, albeit with increasing antisemitism from the 17th Century onwards. This is something that it is so easy to forget; focusing as we do on how these people died, we sometimes forget to reflect on how they lived.

During our time in Poland we saw the shadows of a thriving, vibrant community. In many a Polish town the shades of the people who lived and laughed and loved there haunt the visitor. Their joys and their sufferings linger in the shells of synagogues, in the vanished businesses and the ghetto walls, in the mountains of pots and pans and shoe polish piled up in that awful camp. Everywhere, as in so many places in Europe, is the ubiquitous Holocaust memorial.

In 1939 Jews made up a substantial minority in dozens of Polish cities and towns, to say nothing of the villages. In this Oświęcim was atypical, as the town’s pre-war population of roughly 14,000 people included 9,000 Jews, constituting well over half of the populace. Jews had made this town, were hugely influential in the local community, and owned the majority of businesses here. 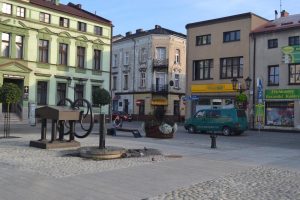 We visited Oświęcim on a wet, miserable afternoon in April. For those who know the history of this place a sadness hangs over the town, a damp, grey feeling that settles on you and refuses to leave. We’d spent the morning at the site of the former Kraków Ghetto and the excellent Galicia Jewish Museum, so it’s fair to say that the mood upon arrival in this sad little town was far from cheerful. No doubt the weather too played a part, yet even on a bright summer’s day that miasma would still be there, circling, inexorably, that stain on the earth two miles outside of the town.

People come to Oświęcim for one reason. They come to bear witness to the camp, to stand on the spot where it all happened. The town hosts a music festival every year, Life Festival Oświęcim, a celebration of peace and music and life. This year, Elton John and Queen will headline. It is plain to see why this town, as opposed to Kraków just forty miles away, holds this event. People come to Oświęcim for one reason.

Oświęcim’s cemetery is vibrant with flowers and photographs. There is life even here, a past, a future. Across the road, in the walled, locked compound of the Jewish cemetery, just two ohels (structures above Jewish graves) stand among the rubble and the vegetation. One belongs to the family of Ashe Scharf, who financed the renovation of the cemetery in the 1980s. The other belongs to Szymon Kluger, the last Jew in Oświęcim, who died in 2000. The majority of the monuments here are shattered, destroyed by the Germans upon their arrival. The few gravestones that have been re-erected are almost certainly standing in the wrong place. 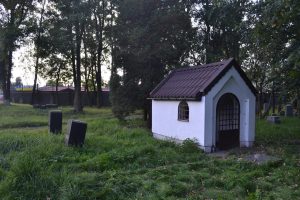 The people of Oświęcim do a fantastic job of preserving the Jewish heritage and history of their town, efforts that are echoed throughout Poland. Nazism is dead, and the Jews are not. But I was told by our guide that ‘there is no Jew in Oświęcim today’. It is difficult when standing in Oświęcim, surrounded by the remains of such a brutal, incomprehensible crime as the Holocaust, to shrug off the sense that on some level, Hitler won.

For how can life go on? The truth of the matter is, it cannot. Not in the same way. Gone are the shtiebels (prayer rooms), the homes, the businesses, and the people. The Jews of Oświęcim deafen the visitor with their silence. Their absence echoes in the synagogue, through the shattered cemetery, along the street of vanished Jewish buildings that overlooks the Sola River.

Life goes on. The people of Oświęcim live and laugh and love. But how many more ought there be here? How many other places in Poland, in Europe, are irrecoverably diminished by the murder of so many of their citizens? How many villages in Cambodia, Rwanda, Bosnia? Is this what awaits Darfur?