In commemorating the lives of the family members who she was never able to meet, one second-generation refugee of Nazi persecution demonstrates how powerful an act of remembrance can be, and how important it is to keep the memory alive. 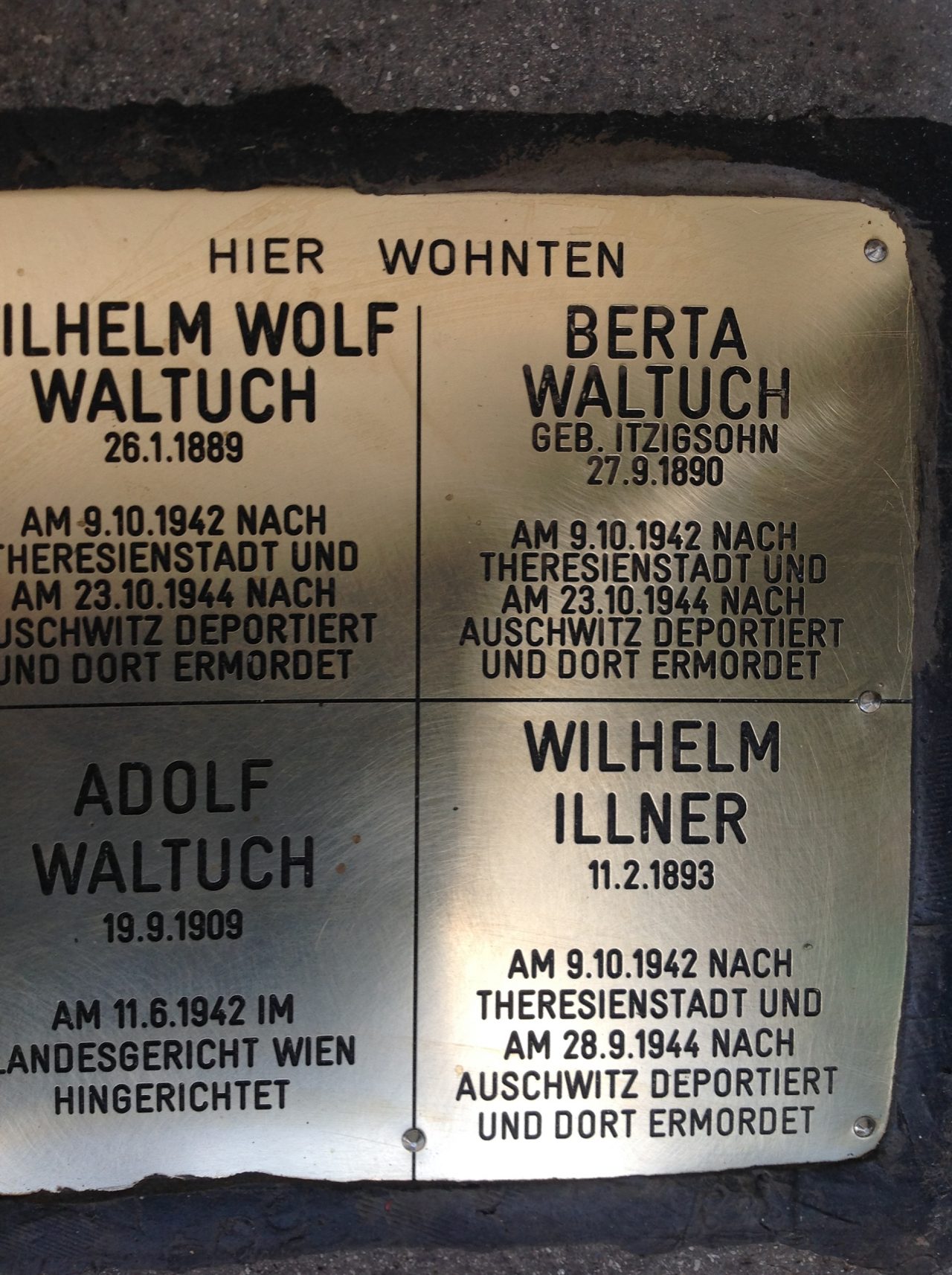 In May 2014 Kay Sharpe, the daughter of a refugee from Vienna, travelled to install memorials at the former home of four members of her family who were murdered by the Nazis. She travelled to contribute to a collective memorial of over 45,000 other memorial stones – or Stolpersteine in German. These small brass plaques which resemble cobblestones are scattered across the European continent marking the places where those murdered by the Nazis once lived. Translating roughly as ‘stumbling stone’, each one represents an individual, bearing their name, their date of birth, and the date and place of their death. The stones sit at the place where the person lived before their deportation and murder. For the relatives of those killed, such as Kay, the stones represent a way of sharing the memory of these individuals.

Before the Holocaust, Hedda Waltuch, Kay’s mother, lived with her family in Vienna. At the time of the Anchluss (the annexation of Austria to Germany) Kay’s great-grandmother Schendel Itziksohn lived at the flat in Favoritenstrasse 12 with her son, Wilhelm Illner, her daughter Berta Waltuch and Berta’s husband Wilhelm Wolf Waltuch. Wolf and Berta had three children: Adolf, Gertrude, and Kay’s mother Hedda. The family led happy lives in Vienna. Wolf part-owned a cinema where Wilhelm also worked. The children used to play in the grounds of the nearby Belvedere Palace. All of this changed dramatically when Austria was annexed into greater Germany, and then when war erupted in Europe. Wilhelm, Wolf and Berta were all deported first to the Theresientadt concentration camp, and later to Auschwitz, where they were murdered. Adolf was arrested by the Gestapo and executed, on the charge of having relations with a non-Jewish person. Hedda and Gertrude were sent to England. Schendel died alone at 87 years old in 1945.

The significance of the Stolpesteine

By making the journey to Vienna and laying Stolpersteine for the murdered members of her family Kay, is preventing their names from being forgotten. On the Stolpesteine website, Gunter Demnig, the artist behind the project, cites a passage from the Bible: ‘a person is only forgotten when his or her name is forgotten’. Simple though they are, the Stolpersteine certainly achieve this modest yet powerful goal of preserving some of the names of those millions murdered during the Holocaust. The name Waltuch Wilhelm has been found carved into a wall in Theresienstadt. We can never be certain if Wilhelm Wolf Waltuch was the person who did this, but whoever’s name it was it remains there today. In the same way, the Stolpersteine which now sit at Favoritenstrasse 12 in Vienna for Wilhelm, Wolf, Berta and Adolf preserve the memory of the people who lived there before the Holocaust.

Kay says that laying Stolpersteine was an important process. Any ‘lovely thoughts’ she previously had of the lost family in Vienna that her mother had described to her ‘always ended with that gas chamber’. Visiting the place they had lived and remembering their lives helped Kay to overcome this. Installing such personal memorials at the centre of their former livelihoods evokes the memory of the lives – and not just the deaths – of those who perished at the hands of the Nazis. ‘Now my last thoughts of my Viennese family are of laying the remembrance stones in Vienna and family and friends and people who have helped me with my research… now I smile when I think of them instead of crying,’ Kay told us.

Stolpersteine have been installed across Europe in their tens of thousands. Demand for them is so great that Demnig is currently fully-booked for the rest of the year. Despite this monumental achievement, the project can never hope to place memorials for any significant proportion of the vast number of those killed; a testament in itself to the sheer scale of the Holocaust. Stolpersteine have been placed in various countries across Europe, including France, Poland, Italy, Denmark, Austria and Germany. These ‘stumbling stones’ are installed to immortalise not just the memory of Jews murdered, but also the Roma, Sinti, black, disabled, gay and various other victims of Nazi persecution.

The theme for Holocaust Memorial Day 2015 is Keep the memory alive. It reminds us of how important it is to remember the individual people that they were before their persecution, the lives that they led, and not solely identify them as anonymous victims. The individuality of each person murdered during the Holocaust is easily lost within its incomprehensible murder statistics we must confront during memorialisation; each victim is one of over six million. Memorials such as the Stolpersteine have the critically important effect of connecting future generations with these destroyed past generations. These ‘stumbling stones’ interrupt the present, confronting us with the past. They make you stop and reflect as you catch a glimmer of their metal surface. They drive you to question who lived here 70 years ago, and forge a personal connection. In doing so, they contribute powerfully to help Keep the memory alive.