My family were evacuated... The train was packed like sardines… altogether 3,000 of us in one train. And it took three days…that was a nightmare in itself. People died on the train, and they wouldn’t stop for us to bury the dead.

You can download a PDF of Var's life story here.

You can download the easy to read version to Var's story here.

'I was born and raised in the town of Takeo, south of the capital… My family and social background was rather privileged. My parents lived a comfortable life. In March 1970, [King] Sihanouk was overthrown in a coup led by General Lon Nol, who declared the country a republic. This threw the country into civil war.'

On 17 April 1975, Khmer Rouge forces entered the capital city, and seized Phnom Penh marking the beginning of Genocide in Cambodia. The Khmer Rouge believed that Cambodia should be returned to an alleged ‘golden age’ when the land was cultivated by peasants and the country would be ruled for and by the poorest amongst society. They wanted all members of society to be rural agricultural workers rather than educated city dwellers.

'The date, April 17th, 1975, would stay in the minds of millions for years to come. It marked the beginning of almost four years of terror as the Khmer Rouge turned Cambodia into a vast concentration camp.

'A few hours later, our misery started. The Khmer Rouge ordered us to leave the city “for three hours only” and to carry nothing with us...I left my house with my mother, my two daughters, three sisters and two brothers.'

'Two million people were forced out of the city and on the road.'

'A general air of misery hung over the whole crowd as we trudged along. Our entire fabric of life had been torn apart…I had never seen the streets so packed with people before.'

'Five hours passed, one day, two days, three days…. We realised by now that this was a trip without return. The Khmer Rouge fired machine-gun rounds in the air to force us to advance under the intense heat of the scorching sun.'

'After about a month, completely exhausted, we stopped in a village where the Khmer Rouge started to integrate arriving city-dwellers like us into the life of the rural inhabitants…My family…were assigned to dig irrigation canals, ponds, dams, and cut trees in the forest and the jungle... We were then forced to attend brainwashing sessions between 9 and 11 o’clock…The Khmer Rouge used to keep us on the move from village to village so that we couldn’t organise an insurrection. We usually travelled on foot or by ox-cart, but on one occasion we were sent by train.'

'My family were evacuated, from the south of Cambodia, to the north of Cambodia. The train was packed like sardines…altogether 3,000 of us in one train. And it took three days…that was a nightmare in itself. People die[d] on the train, and they wouldn’t stop for us to bury the dead, eventually they started to smell and we had to throw them through the window of the train.'

The train arrived in Battambang City in Western Cambodia. Var’s family were then moved to a distant village, Thmar Pouk near the border with Thailand. They had heard rumours that the Vietnamese army had invaded Cambodia and were fighting against the Khmer Rouge. The arrival of Vietnamese soldiers in Thmar Pouk confirmed that it was true, and the Khmer Rouge fled into the mountains.'

In Thmar Pouk, a girl from the nearby village of Srae Memai came looking for Var.

'[The girl’s brother] Yom…had just arrived from Thailand on a mission to find the family of a Khmer friend, a former pilot who now lived in Thailand. By chance, the wife of this pilot had the same first name as me, and two daughters around the same age as mine. The girl was convinced that I was the pilot’s wife. I told the girl that I was not the person Yom was looking for, but she believed without any doubt that I was.'

Var and her family made their way to meet with Yom in his village and left with more than a hundred villagers (all of them Yom’s relatives) on foot, for the Thai border. They were warned not to stray from the beaten path because of the danger of landmines that were strewn throughout the jungle. When they got closer to the border, the Thai police picked them up and took them to a refugee camp. Due to the efforts of several relief workers, Var and her daughters Somaly and Panita were eventually accepted for resettlement in the United Kingdom. 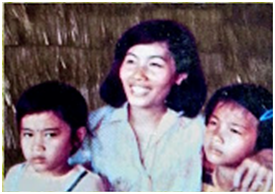 Var with Somaly and Panita (From Phnom Penh to Paradise, 1988)

In 1981, Var learned in a letter from a friend that her husband Virak Phong had flown back to Phnom Penh in early 1976 with several hundred other Khmer intellectuals. They were told that the Communists would be able to use their skills to help rebuild their country but when they arrived in Phnom Penh, they were all seized and thrown into prison for being tainted with the capitalism of the West. Virak Phong died in prison towards the end of 1976.

Var settled into life in the UK and began to exchange letters with Robert Ashe, a young Englishman, who worked for the United Nations High Commission for Refugees. They had met and formed a friendship whilst in the refugee camp in Thailand. Var and Robert married in 1982. Their son Peter was born in April 1984.

If you want to read more about Var and her life story her book From Phnom Penh to Paradise is available to buy. All profits from the book go to a charity orphanage in Cambodia.