Sophari Ashley lost family members during the Genocide in Cambodia and was forced to leave her home in Phnom Penh aged ten. Whilst the psychological and physical effects of genocide have stayed with her, she now leads a more secure life in the UK.

I cannot forget my past. I suffer poor physical health as a result of the malnutrition, the over-work and beatings which I faced under the Khmer Rouge. And emotionally too, I still bear the scars. I suffer from anxiety and nightmares when reminded of what I went through.

Sophari was born in Phnom Penh, the capital of Cambodia, in 1965. The fighting during the Cambodia Civil War, which started in 1970, prevented her from attending school. When the Khmer Rouge entered Phnom Penh in 1975, Sophari, aged ten, and her family celebrated, believing that their victory meant the end of the war.

However, the Khmer Rouge soldiers told them to ‘leave, leave’ and Sophari, her parents, two younger brothers and one of her sisters were forced to walk from 9am until around 11pm with virtually nothing to eat. There was a bad smell where they slept but she didn’t realise until the morning that the smell came from dead bodies a few metres away.

For the next month, they had to walk every day with almost nothing to eat. When Sophari’s mother realised that they would not be returning home to Phnom Penh she started suffering frequent heart palpitations. Sophari and her father alternated looking after her and Sophari’s siblings, and looking for food. At this time one of Sophari’s younger brothers, A-Sruoch, died from hunger, aged just two.

After two or three months, Sophari and her father were forced to work in the rice-fields, working every day from dawn to dusk, with no rest for months on end. Sophari spent one month away from her parents, building mud-roads and sleeping on rice sacks. Sophari and her family were then moved again, to a very remote area in north-western Cambodia. Life in Battambang was even more difficult, and Sophari’s other brother, A-Sraoh, died there, also aged two, from hunger and lack of medication.

The following year, Sophari’s older sister, Chanty, (who had been staying in the east of the country) was caught having picked a coconut without permission and was executed, aged 14. When the Khmer Rouge discovered that Sophari’s father had formerly served in the government army they took him away; later Sophari learnt that he had been executed in August 1978.

On one occasion, Sophari and the group of children she had been working with decided to run away. The Khmer Rouge militia found out and started chasing them on horses. Sophari jumped into a river and waded through, with the water nearly above her head. She walked on her own for two days, sleeping one night in a tree whilst a pack of wolves howled underneath, and eating only wild berries. She was able to get back to her mother without getting caught.

Around September 1978, Sophari was taken by the authorities to a forest with no food, no shelter and no protection from the ceaseless rain. Many people died there from hunger and disease – death became very common, an almost daily occurrence. Sophari’s sister, A-Srey, was seriously ill but survived because Sophari’s mother exchanged some jewellery that she had kept hidden away to get local villagers to look after her. 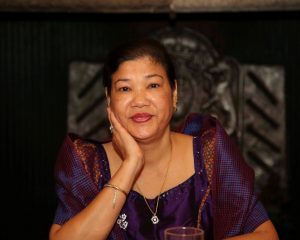 At the beginning of January 1979, Sophari heard fighting for the first time for four years. She didn’t realise that the Vietnamese army had invaded.Over the next few days the fighting intensified and more and more villagers were being forced into the camp. Sophari heard local children in the camp talking among themselves, that they were afraid they’d never see their parents again and were planning to run away back to their villages. Sophari followed them, walking all night. As soon as she reached the village where her family were, the village was evacuated and they walked constantly for three weeks, fleeing from the Khmer Rouge. Eventually they reached Battambang, just as the Vietnamese army consolidated control. The Khmer Rouge regime led by Pol Pot was over, even if the war itself continued more than another decade.

After losing three of her siblings, her father and much of her childhood during the Khmer Rouge years, Sophari has since led a much more secure life. She stayed in Battambang for a year before returning to Phnom Penh where she started working for the national dance company. In 1994 she married a British man who was working for the UN peacekeeping mission; they have one son and live in London where Sophari enjoys the reassuring sense of security, rule of law and freedom.

Find out more about the Genocide in Cambodia