Building on their first Holocaust Memorial Day (HMD) event in 2016, for HMD 2017 the RBS Jewish Society organised a bigger commemorative event based on the HMD 2017 theme: How can life go on? 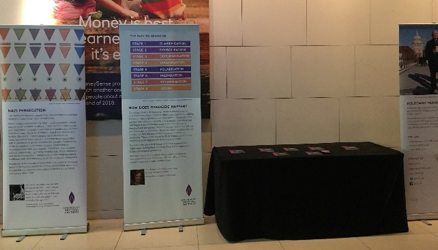 On Monday 23 January, RBS staff were invited to an evening of talks from fellow staff members and invited guests. The event was broadcasted by video link, connecting employees in Edinburgh, Manchester and Stamford (USA). The event began with the lighting of a memorial candle to remember the victims of the Holocaust and the genocides that followed.

John Morgan from Ulster Bank gave a presentation about the escape lines – routes and networks used by Jews and other groups persecuted by the Nazis and their allies to escape Nazi-occupied Europe. Many ‘helpers’ risked their lives providing food, shelter and guidance along the difficult and treacherous routes.

In Edinburgh, Reverend Ian Alexander told the story of Jane Haining, a Scottish woman who risked her life to protect Jewish children at a missionary school in Budapest, Hungary. She is the only Scottish individual who has been named as Righteous Among the Nations by Yad Vashem (in 1997). Finally, Ruth Laslo an employee of Natwest Markets in Stamford, USA, told her moving personal story as a daughter of two survivors.

Before and after the presentations, guests were invited to attend a reception where they could explore some of the Holocaust Memorial Day Trust’s (HMDT) resources and view an exhibition about genocide, which had been displayed around some of RBS London buildings in the week leading up to the event.

Guy Hermon, chair of the RBS Jewish Society said ‘Antisemitism and other forms of hate continue today. That’s why we do this event – we all have a part to remember what happened and combat denial and hate. We all should advocate for tolerance, inclusion and diversity wherever we are and whatever we do.’

As part of the event, RBS also raised £1,800 for Jewish Care which is a charity organisation providing a variety of care services to Holocaust survivors.