Lily Ebert BEM was 20 when the Nazis deported her from her Hungarian hometown to Auschwitz. As part of our 2011 Hidden Histories project Lily talked about the gold pendant which remarkably survived the Camp with her. 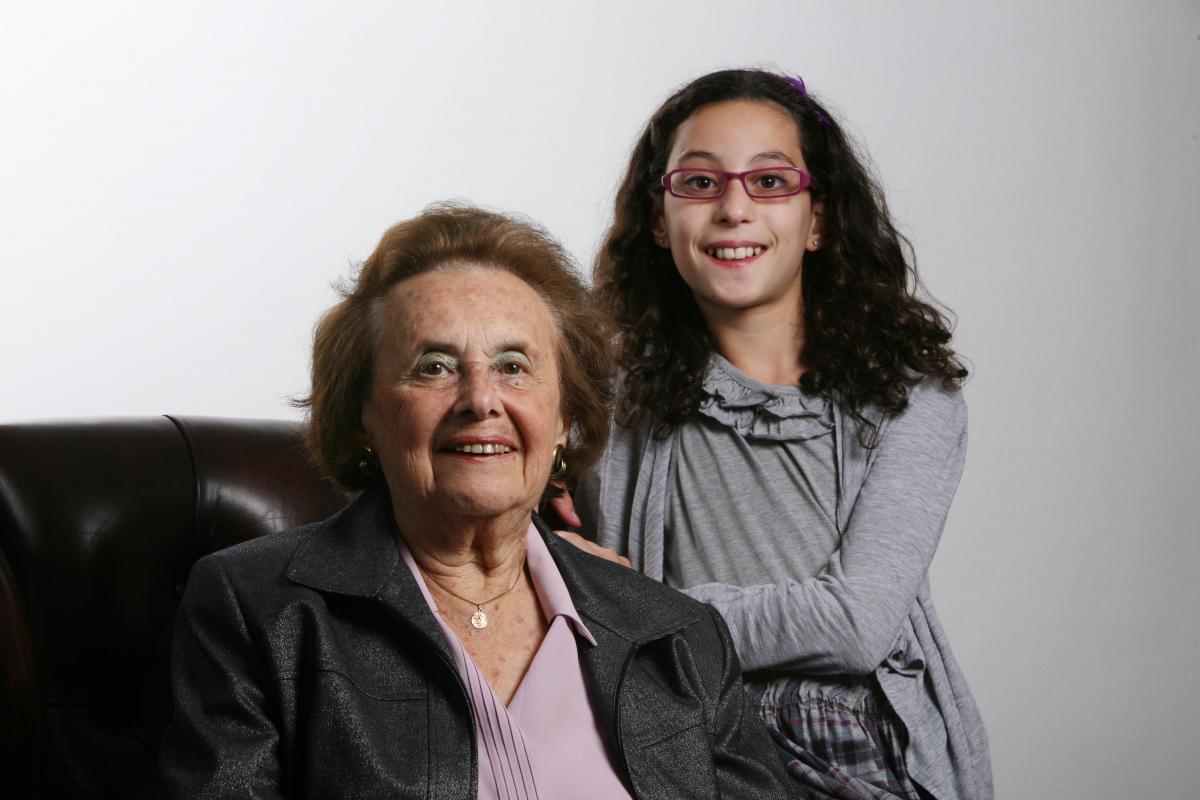 Here is a happy picture of Lily. Can you see what Lily is wearing on the chain around her neck? It’s a tiny pendant, made of gold. It looks quite ordinary, similar to any locket, charm or keepsake anyone might wear but it has its own remarkable Untold Story.

When Lily was a very young child of about 4 or 5 her mother gave her this small gold pendant. Even then it wasn’t very expensive or unique but young Lily was very pleased with her present. Lily had a happy childhood growing up with her sisters and brothers in Hungary within a loving family. Life was good until the Nazis came. Lily was a teenager when the Nazis arrived in Hungary and her life was to change forever. The Nazis hated Jewish people and would not allow them to lead normal lives. They confiscated property and valuables and made Jewish people live in terrible conditions. Lily and her family were Jewish. One day they were ordered to hand in all their gold and jewellery. Lily’s brother knew how important the tiny gold pendant was to his sister so he hid it in the heel of their mother’s shoe.

In July 1944, when Lily was 20 the Nazis deported her from her town of Bonyhad with her mother, brother and three sisters. They were taken by train, crammed into dark and almost airless cattle trucks, to Auschwitz. The small pendant went with them. It was still safe inside the heel of her mother’s shoe. Lily and her mother wore the same size of shoe and as they arrived at the camp her mother asked Lily to swap shoes with her. Lily put on her mother’s shoes.

Although this happened over 70 years ago Lily can still remember her arrival at the camp. After the long and terrible journey ‘everyone was half-dead’. They were ordered to climb out of the train and stand together five in a row. There was a man with a stick in his hand. It was Dr Mengele, the notorious Nazi doctor who became known as the Angel of Death for his brutal experiments on inmates, though at the time Lily didn’t know who he was. With one movement of his hand Dr Mengele sealed the fate of the people before him. He sent people right or left — to life or to death. The people who were sent to the left were taken immediately to the gas chambers and crematorium. Lily and her two sisters Renee and Piri went right. Her mother Nina, brother Bela and sister Berta went left. She never saw them again.

Lily and her two sisters were ordered to take a shower then their hair was cut and their remaining belongings stolen. The Nazis left them with only their shoes and in the heel of Lily’s shoe the tiny pendant lay hidden, Lily’s last link with her mother. Lily and her sisters saw a fire in the chimneys, and a smelt a terrible smell. They thought it was a factory and asked people about it. They were told it was not a factory and that it was Lily’s family who were being burned there with all the others who had been sent down the path to the left.

This knowledge made Lily even more determined to keep her pendant safe. It was her only remaining possession and a reminder of her happy childhood. It was a link to her murdered mother and a symbol of defiance. The Nazis would not be allowed to steal it! The guards ordered valuables to be handed over but her pendant stayed in the heel of her shoe. When the shoes wore out she placed the pendant in her daily ration of bread. After about four months in Auschwitz, the sisters were transferred to an ammunition factory near Leipzig. The pendant went with them.

Allied forces liberated Leipzig in 1945 and the sisters sought refuge in Switzerland. Lily tried to rebuild her life. She wore the pendant every day in memory of her murdered family. Eventually she married and had children. In 1953 she was reunited with Imre, one of her brothers, who had been imprisoned in a Nazi labour camp. In 1967 she came to London with her husband and three children.

Over 70 years have passed since liberation and as we see in the picture, Lily is now a proud grandmother. She still wears the tiny gold pendant and shares its remarkable story with all those who have time to listen. Any gold arriving in Auschwitz was stolen by the Nazis so Lily believes that her pendant is unique, the only gold to enter and leave the camp with its rightful owner. Like Lily herself, it survived against the odds. Lily asks that now we know the Untold Stories surrounding it we will share them with other people. She hopes that everyone who listens will acknowledge just how terrible human beings have been and still can be to each other. She wants young people especially, as the future of the world, to understand the importance of tolerance and love and asks them to promise to be kinder to each other. The Nazis ruled through policies of discrimination and hatred but Lily believes that on Holocaust Memorial Day 2011 young people should remember the adventures of one tiny pendant and use its Untold Stories of survival to challenge such hatred by reminding everyone that no matter what different skin colours, religions or nationalities exist, all human blood is red.