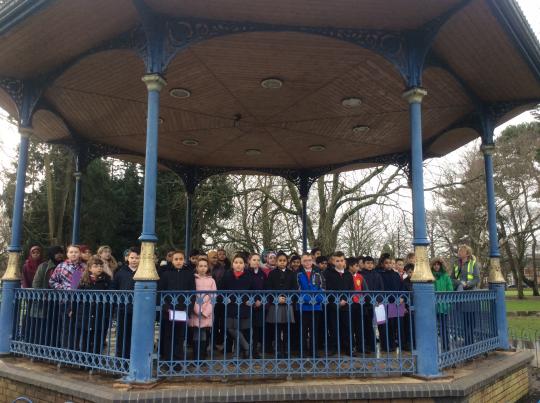 During the moving ceremony pupils seized upon the 2016 theme Don’t stand by as they attached to the band stand railings personal pledges to stand against prejudice and intolerance. Three pupils read out poems they had written to that were inspired by learning about Hedy Klein, a Jewish concentration camp survivor.

The ceremony closed with a minute silence and with the pupils singing ‘A Song of Peace’.

This is the first year that Lansdowne Primary School has marked Holocaust Memorial Day.  Bruce McInnes, one of the Year 6 teachers, said that it was the theme – Don’t Stand By that had inspired him to organise the event.

‘This kind of insidious persecution can only take place because people don’t stand up and say it’s wrong and that’s important for kids to understand. These days there’s a lot of mistrust of anyone who’s different and we teach the children that just because someone is different it is not a reason to hate them.’

‘I think that it’s still a relevant message in our communities as there are groups of people who could find themselves targeted because of difference.’

It is planned that this will now become an annual event held by the school.

A poem inspired by Hedy
Written by Emilie 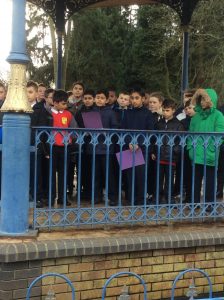 Pieces of fabric weaved together with stitches of love.
Growing and stretching,
Bigger and bigger,
Love.
A comforting blanket cloaking someone as they sleep.
Peace and tranquillity.
Joy.
Happiness, laughter, fun.
A bed of flowers blooming brightly in the sunshine,
Brighter and brighter,
Happier and happier. 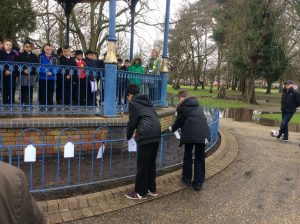 Abandoned and alone,
A single flower in the centre of a field, perishing slowly,
Drying out in the darkness,
Suffering.
A vicious beast savaging its prey,
Venomous poison seeping through the blood,
Pain
Crunching and snapping
Teeth as sharp as daggers tearing into an arm,
Bones shattering.

Freedom
A vast open sky,
A young bird vacating its nest for the first time in years,
Free
Safety 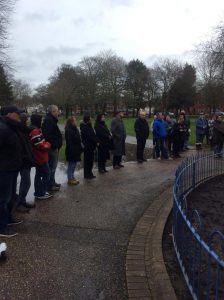 Cubs, unnerved and quivering, protected by the mother,
Relief
Sighing and gasping,
A robin returning from the forest after several months,
Battered and bleeding.
Memories
Little fireflies buzzing around, in and out of heads,
Reminding people of the past,
Some tinged with sadness,
Others full of joy and happiness