Joan Salter MBE is a child survivor of the Holocaust. Born Fanny Zimetbaum in Brussels on 15 February 1940 to Polish Jewish parents, she was three months old when Belgium was invaded by the Nazis.

The most poignant reminder of all from the past is a photograph I found at the Portuguese Red Cross archive. It is of a group of 14 children… At the front is a skinny little girl of three-and-a-half. This is Fanny Zimetbaum – the child I was once. 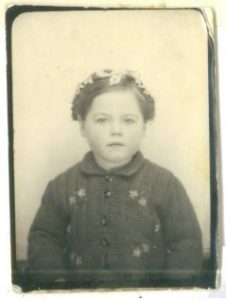 Joan’s father Jakob thought the Germans would march straight to France and would not attack Belgium, so at the end of 1939 Jakob and his wife Bronia moved to Brussels where Joan was born a few months later. After the German invasion of Belgium in May 1940, Joan’s father was deported, along with all non-native men over the age of 15. Her mother took Joan and her sister to Paris, which her father considered to be safer, and she carried them down through Vichy France and eventually over the mountains into Spain in early 1943.

‘We were captured at the border – but luckily it was by the Spanish police. My sister was put into a convent and I was allowed to stay with my mother in prison in Figueres, [Spain]…The guards allowed the children to wander freely, and local people brought my mother food and cigarettes.’

The Vichy government promised safe passage for the children of Polish parents. Under the care of the Red Cross, the children would be allowed to leave France, travelling to America via the neutral port of Lisbon, in Portugal. Joan’s mother had to make the difficult decision whether to let her children go or to keep them with her and risk possible deportation.

‘In June 1943, I was put on a boat from Lisbon, to the United States of America… our sea voyage was not without danger. Though she was flying the flag of a neutral country, our ship, the Serpa Pinto, was stopped by a German submarine… Our ship was boarded… As we stood, silent and terrified on deck, the submariners returned to their ship which rapidly submerged and vanished. The Serpa Pinto continued safely across the Atlantic.’

‘On arrival in the USA we had health checks and were sent to an orphanage… Dr and Mrs Farell, a local physician and his wife, became my foster parents.’

‘I was young enough to adapt to my new life… My name was changed to Joan, my language from French to American. Over the next few years, little Polish Fanny Zimetbaum morphed into all American Joan Farell.’

‘But then the war ended. It took the refugee agencies time to locate splintered families… It was not until 1947 that I was reunited with my parents in London. This might seem like the ‘fairytale ending’ but it was anything but.’

‘Both of them were severely traumatised… To me, looking through the eyes of a child, their behaviour seemed irrational, incomprehensible… My parents were broken in health, spirit and mind… and were ill-equipped to deal with the return of their angry and alienated children. I spent the next ten years shuttling between my two families, becoming more and more confused as to who I really was. Nobody’s adolescence is easy; mine was a nightmare.’

‘Though my mother found the past too painful to revisit voluntarily, my father and I were at last able to find some peace in our relationship, in our travels back through his memories.’ 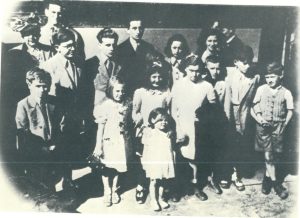 ‘It was not only what he told me which recreated the past for me… The most poignant reminder of all from the past is a photograph I found at the Portuguese Red Cross archive. It is of a group of 14 children; the trauma they have lived through etched on their faces. At the front is a skinny little girl of three-and-a-half. This is Fanny Zimetbaum – the child I was once.’

‘Only now, 60 years on, am I able to open the door behind which I left Fanny, locked firmly away, for so many years.’

Joan visited Poland for the first time over ten years ago, going to Tarnow where her father came from. She now goes back every year to attend a ceremony in June, on the anniversary of the week that most of Tarnow’s Jews were deported, which takes place in the woods and in different parts of the town.

‘It’[s]…like me reclaiming my family, even though I hadn’t been born in Poland, and letting them know I still remember them.’ 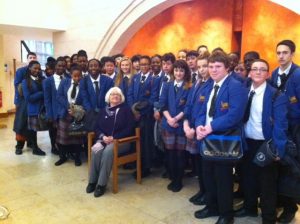