Iby Knill was transported to Auschwitz from Hungary in 1944. As part of our 2011 Hidden Histories project Iby told us about her father's watch chain. Her father threw the chain to Iby's brother as he was being marched away to be deported to his death.

Links to the past: Iby’s watch chain bracelet 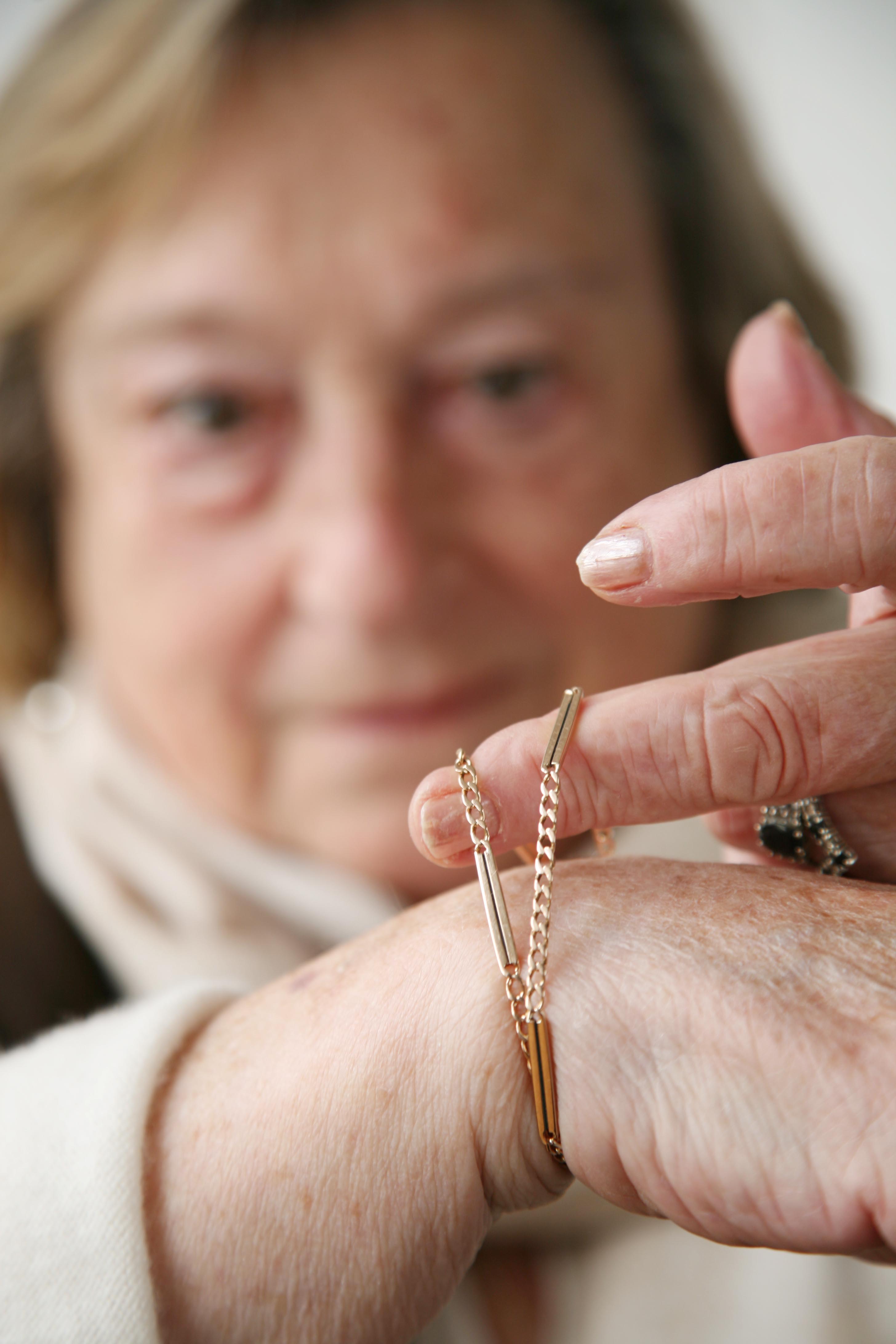 This is a photograph of Iby. She is wearing her special bracelet. It looks quite heavy. On closer inspection it doesn’t seem to be an ordinary bracelet at all. It’s a very strong chain made of links of heavy gold. It’s actually a watch chain which belonged to Iby’s father but it hasn’t supported his watch for over 70 years. Iby‘s father, like many men of his generation, kept his watch in his waistcoat pocket. Watches were attached to a chain to prevent them from being lost. Iby says her father always wore his watch chain stretched across his waistcoat and today every time she touches the chain she remembers him and feels strong, close links between them. The chain is surrounded by Untold Stories.

Iby lived in Bratislava in the former Czechoslovakia. When the Nazis invaded her country she was a teenager. The Nazis placed severe restrictions on the civil rights of Jewish people and Gypsies. Iby escaped across the border into Hungary where she decided to stand up to Nazi messages of hatred by joining the resistance. Her group was responsible for rescuing shot-down Allied pilots who had escaped from Germany. They were hidden and then smuggled out of Hungary into Yugoslavia and then to Greece where they could be picked up by their own side.

The Nazis hated anyone who opposed them and in 1942 Iby was stopped on the stairs of her flat and arrested. She was taken to a police station interrogated and tortured. She spent two years as a political prisoner where she volunteered as a nurse, helping the other prisoners. Iby was released in February 1944 but four months later was rearrested in a dawn raid round up. She was taken to the local brickyard where she was held for a week together with other Jewish prisoners.

Transported from Hungary to Poland in a cattle wagon, Iby arrived at the Nazi death camp Auschwitz. In a large room she was made to sit naked on a stool and her head and body hair was shaved off under the watchful eye of male and female SS guards who laughed. For an 18 year old girl the humiliation was terrible. In the camp she witnessed dreadful things. She shared the fears of camp inmates when told it was time for a shower because, she explains ‘One never knew whether one was going to be gassed or showered.’

One day a camp officer asked for volunteers to put themselves forward for slave labour in another location. Iby volunteered and was sent to Lippstadt to work as a nurse. Although she was a slave, it was a relief to leave Auschwitz. Iby spent nine months there but in March 1945, as Allied troops drew close to Lippstadt, the camp was abandoned and the Nazis forced Iby and her fellow slaves to march almost 150 miles towards the notorious Bergen-Belsen camp. The prisoners and their guards did not make it to their final destination. US army soldiers liberated the prisoners in a field before they reached the camp.

In 1946 Iby returned to Bratislava to be reunited with her mother and brother. She was not to see her father again. Although the family had escaped into Hungary he was arrested and sent to Auschwitz where he was murdered. Her mother handed Iby a handkerchief with a knot in the corner. Iby undid the knot and found the watch chain which her father had always worn. Her mother explained that Iby’s brother, who was six years younger than Iby, had stood and watched as his father was marched away to the wagons which would deport him to Auschwitz. The father looked back towards his son, who was crying, and threw him a handkerchief. A Hungarian soldier picked the handkerchief up and handed it to the boy, telling him to wipe his tears. There was a knot in the corner of the handkerchief and inside the knot Iby’s father had hidden his watch chain. Iby’s brother kept it safe throughout the war. Now it belonged to Iby. She had it made into a bracelet and has worn it ever since. But there were further Untold Stories for Iby to hear. By the time her family escaped into Hungary all the refugee camps were almost full. They could only shelter adults and children had to be placed with relatives or in orphanages. Iby’s brother found shelter in the Swedish Embassy, where Raoul Wallenberg, a Swedish diplomat, was sheltering Jews. Iby’s brother slept in the bottom of a lift shaft and ran errands for Wallenberg. He told Iby that he witnessed the actual arrest of Wallenberg by two Russian soldiers. Wallenberg disappeared and to this day nobody knows what actually happened to him.

Since 1946 Iby has always worn her father’s watch chain around her wrist. It is her link to the father she loved and the happy family life she had before Nazi hatred infected Europe. She married a serving officer from UK forces and came to live in England. She did not talk to anyone about her own horrific experiences for sixty years. They remained Untold Stories.

After her husband died Iby decided to take a course at university. She was studying theology. One day, in a seminar there was a discussion about the Holocaust and someone commented that it was difficult to imagine or to talk about what had happened as there was no-one in the group who had experienced life in a Nazi camp. Suddenly Iby knew that the time of silence was over. She had been in Auschwitz, she was a witness. She spoke up and began to share her story with the group and she has shared it with many others since that day.

Iby says she is not usually an emotional person but when she touches the chain she feels that her father is close to her, even though over seventy years have passed since she last saw him wearing it. She believes that special objects can carry an emotion from the person who owned them to another person. She says her unique watch chain bracelet helps her to actively remember her father. Although Iby was silent about her past for so many years she now believes that there are too many Untold Stories which people don’t share because they think they are unimportant. Iby has learned that if we don’t tell Untold Stories we deprive the next generation of knowledge and truth.

On Holocaust Memorial Day she hopes young people will share her story with others and after hearing about her father’s watch chain she wishes us all to remember the value of human life. She says:

‘Every human being has a value; is somebody. We must learn this-differences in colour and religion don’t matter, under the skin we are all the same.’