For HMD 2015 Sabina met with illustrator Kimberley Burrows as part of our Memory Makers project.

Sabina Miller and her family were forced to live in the Warsaw Ghetto, where they contracted typhus. Her parents died, but Sabina managed to escape and survive the war by hiding out in the Polish countryside and living under assumed identities.

Our Memory Makers project paired Holocaust and genocide survivors with nine British artists, who responded to their stories with works of art for Holocaust Memorial Day 2015. Kimberley and Sabina discussed the importance of family and positivity to overcoming adversity – and how hatred can never break the best of the human spirit.

Severely visually impaired illustrator Kimberley Burrows met Holocaust survivor Sabina Miller over lunch in central London. Sabina survived the Holocaust by fleeing the horrors of the Warsaw Ghetto and hiding out in the Polish countryside. Kimberley and Sabina discussed the importance of family and positivity to overcoming adversity – and how hatred can never break the best of the human spirit. 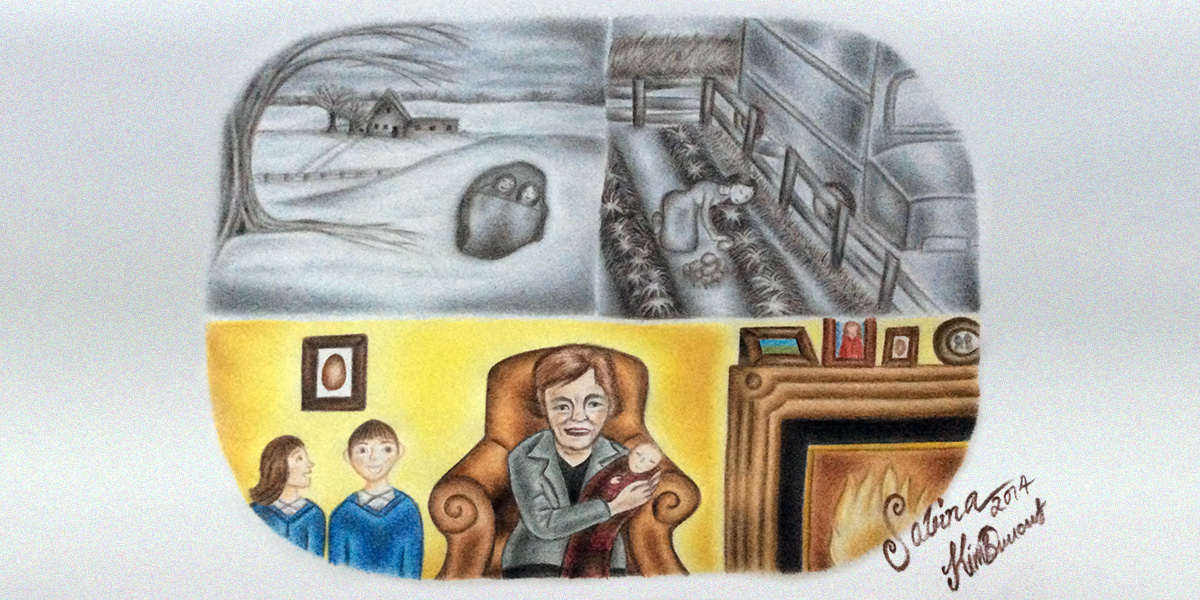 Kimberley and Sabina both enormously enjoyed their meeting – Kimberley recalls that ‘When I first met Sabina and she told me her incredible story, a few elements immediately grabbed me and stayed in my mind; the powerfully haunting image of two young girls (one of whom was a young Sabina) huddling together in a hole in the ground, against a snowy backdrop, with just a blanket between them, the harrowing sight of trucks continuously visiting the farm where Sabina worked, taking and transporting any Jewish people they could find, and the Sabina today and how incredibly strong and positive she is now that she has a large, loving family and no longer has to hide her identity.

She left the war without a family so I wanted to illustrate the family she has now, with Sabina surrounded by her grandchildren, the youngest of which is enveloped in her only possession left from the War – a patterned cardigan – which will be passed down through the generations.

I knew that I wanted to capture all of this powerful imagery in my response that I have called, simply, ‘Sabina’. My gift to her. Meeting her was such an honour and a wonderful experience where, in those few short hours we spent talking to each other, she influenced me beyond my imagining. Through her powerful storytelling, kind nature and wise words I have learned first-hand how strong people can be even after enduring the loss of family, identity and hope and that love, kindness and positivity can truly conquer all.’

Kimberley Burrows is a young illustrator living in Salford. She has been severely visually impaired since childhood with only 10% central vision in one eye, which allows her to focus on her illustrations for only short periods of time. She has always had a strong interest in art despite her visual impairment. Kimberley recently created a composition for John Lewis’ 150th birthday, displayed at the Trafford Centre this summer, and is the RNIB’s Young Illustrator of the Year for 2014.

Kimberley wanted to be part of the Memory Makers project to honour survivors and share their inspiring and powerful stories through her illustrations. She connects with overcoming adversity and tribulation, and wants to ensure that the tragedies of genocide are not forgotten.