As a boy, Elie Wiesel survived Auschwitz and Buchenwald camps. As an adult, he dedicated himself to commemorating the Holocaust and to ensuring its lessons were learnt. He was an acclaimed author and recipient of the Nobel Peace Prize. He died on 2 July 2016, aged 87.

The survivors had every reason to despair of society; they did not. They opted to work for humankind, not against it.

Eliezer ‘Elie’ Wiesel was born in 1928 in the small Romanian town of Sighet. He was the third of four children and the only son. He was 15 when, in spring 1944, German troops occupied Sighet. Soon after, he was moved with the rest of his family into one of the two ghettos created in the town. When both ghettos were liquidated the entire Jewish population of Sighet was deported to Auschwitz-Birkenau.

Wiesel later wrote about the conditions in the transport: ‘Lying down was not an option, nor could we all sit down. We decided to take turns sitting. …After two days of travel, thirst became intolerable, as did the heat.’ He recalled his arrival Auschwitz-Birkenau: ‘We stared at the flames in the darkness. A wretched stench floated in the air. Abruptly, our doors opened. Strange-looking creatures, dressed in striped jackets and black pants, jumped in to the wagon.’

At the selection ramp of Birkenau, Wiesel was separated from his mother and sisters. This was the last time he ever saw his mother and his younger sister, Tzipora: ‘”Men to the left! Women to the right!” Eight words spoken quietly, indifferently, without emotion. Eight simple, short words. Yet that was the moment when I left my mother.’ On the advice of an existing inmate, Wiesel lied about his age, claiming to be 18, to avoid being selected for extermination.

Decades later, Wiesel recorded his feelings during his first hours in Auschwitz: ‘Never shall I forget that night, the first night in the camp, that turned my life into one long night seven times sealed…Never shall I forget the small faces of the children whose bodies I saw transformed into smoke under a silent sky.’

After being held for some time at Auschwitz I, Wiesel and his father were transferred to Monowitz (Buna), a work camp that made up part of the extensive Auschwitz camp complex. There he worked as a slave labourer. The loss of his mother and sister and the daily brutality of the camp led Wiesel to question his faith: ‘My eyes had opened and I was alone, terribly alone in a world without God, without man. Without love or mercy. I was nothing but ashes now.’

As the Russian army advanced through Poland in early 1945, the Germans evacuated Auschwitz-Birkenau. Wiesel and his father marched for miles on foot before being transported to Buchenwald concentration camp in Germany, where his father died. Wiesel was liberated from Buchenwald on 11 April 1945.

After liberation, Wiesel was reunited with his older sisters, Beatrice and Hilda, in a French orphanage. He went on to study in Paris and became a journalist.

For a decade after the Holocaust, he kept silent about his experiences, until a French journalist, François Mauriac, persuaded him to write. The result was Night, his acclaimed memoir, published for the first time in French in 1958. The book has been translated into over 30 languages and Wiesel went on to write over 60 books, fiction and non-fiction. 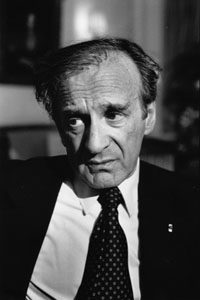 Appointed as the first Chair of the President’s Commission on the Holocaust in 1976, Wiesel initiated Days of Remembrance, the United States’ annual commemoration of the Holocaust. At the Day of Remembrance ceremony in 2003, he spoke of the importance of commemoration: ‘All the rivers run to the sea, days come and go, generations vanish, others are born…What does one do with the memory of agony and suffering?…To remember means to lend an ethical dimension to all endeavors and aspirations.’

He returned to Auschwitz-Birkenau for the first time as part of his work with the President’s Commission and wrote about the visit in his memoir, And the Sea is Never Full: ‘Birkenau: I had not realised that the camp was quite small… It has swallowed an entire people…a people with hopes and memories.’

Alongside his work on Holocaust commemoration, Wiesel spoke out on behalf of Soviet Jews, victims of apartheid, victims of famine in Africa and victims of genocide in Cambodia, Bosnia and Darfur, amongst others. He was a Professor at Boston University and with his wife he established the Elie Wiesel Foundation for Humanity.

Wiesel was awarded the Nobel Peace Prize in 1986. The citation for the award said: ‘His message is one of peace and atonement and human dignity. The message is in the form of a testimony, repeated and deepened through the works of a great author.’

Find out more about the Holocaust