Born in Germany in 1885, Dr Alfred Wiener became a central figure in the documentation of Nazi and anti-Nazi literature during the Holocaust, forming a collection that would become known as the Wiener Library – a national resource which continues to document and educate about genocide.

Dr Alfred Wiener was born in Potsdam, Germany in 1885. He studied extensively in Oriental languages, Arabic literature and Jewish religious thought. In autumn 1914, Alfred became editor of a Jewish newspaper but he was called-up to serve in World War One shortly afterwards, seeing action on both the Western and Eastern fronts. He later worked as a translator with the German Army in Palestine, and became editor of the German army Turkish language newspaper, producing articles and brochures aimed at educating soldiers.

After World War One, Alfred became one of the top officials in the Centralverein, an organisation which aimed to combat antisemitism (anti-Jewish hatred). Alfred continually tried to warn Jews and non-Jews of the dangers of Nazism.

In 1921 Alfred married Dr Margarethe Saulmann, and they went on to have three daughters, Ruth, Eva and Mirjam. Shortly after Mirjam’s birth in 1933, Alfred was called to a meeting with Hermann Goering, who was then Prussian Minister of the Interior. This prompted Wiener to move the family to Amsterdam, where his daughters went to the same school and synagogue as Margot and Anne Frank.

A conference organised by the Board of Deputies and the Anglo-Jewish Association, in London in 1933, published a resolution recommending that a central bureau should collect and disseminate information on Nazi propaganda. This helped Alfred Wiener establish the Jewish Central Information Office (JCIO) in Amsterdam. It later helped to pave the way for Alfred to move his library to London.

On the 1 February 1934, the JCIO began its work, with Wiener as director and David Cohen, who had attended the conference in London, as president. The collection of Nazi and anti-Nazi books and documentary material quickly grew, and by 1938 the library had over 8,000 books and pamphlets and employed ten members of staff. The library operated covertly to protect the resources from the Nazis, yet this meant it was difficult to appeal publicly for funding. Initially, Alfred and David raised money to continue their work through their own personal contacts.

When Czechoslovakia was occupied in March 1938, it was decided that the library needed to move from Amsterdam to a safer location. On September 1, 1939 – the day that Hitler invaded Poland – Alfred opened the Jewish Central Information Office in London.

In 1940, the JCIO merged with the Press and Information Department of the Board of Deputies of British Jews, which had also been collecting relevant material. The Government began sponsoring the activities of the JCIO – which now included publications – but insisted on a name change and ‘Wiener Library’ was informally adopted. Government departments, including the Foreign Office, the Military Intelligence of the War Office and the BBC were among those who requested material from the Wiener Library.

Alfred obtained visas for his family to join him in London. Despite urging them to leave, they remained in Amsterdam; it is thought that Margarethe did not want to leave her sister. In June 1943, Alfred’s wife and three daughters were taken on cattle trucks to Westerbork, a transit camp in Holland. They were then transported to Bergen-Belsen concentration camp where they met Margot and Anne Frank, who they had been friendly with in Amsterdam. Conditions in Bergen-Belsen were appalling, with approximately 70,000 people including Margot and Anne, dying of starvation and disease. Alfred managed to secure false passports for his wife and daughters, which allowed them to be part of a rare prisoner exchange in January 1945. The family took a train to Switzerland, where Alfred’s wife finally succumbed to malnutrition and exhaustion. She died shortly after crossing the border. The three daughters, now aged 18, 15 and 12, took a Red Cross ship to America, where they were reunited with their father. Wiener returned to London and the girls stayed in America, living with foster families before joining their father two years later. 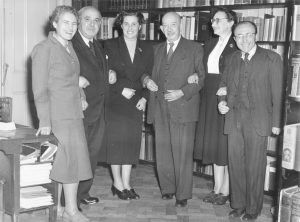 Wiener and his colleagues were, fortunately, able to source some of the funding required for the library. They were able to continue their work, including publishing their own bulletin and providing evidence for trials of perpetrators of the Holocaust.

Ruth Wiener married in 1951, and moved to Australia. Eva married a year later and moved to Israel. Alfred himself remarried in 1953, to Lotte Philips. Mirjam married Ludwik Finkelstein in 1957; Alfred let him choose 300 books from his own stock as a wedding present.

In the 1950s Wiener began making contacts in German, specifically to engage German youth ‘in order to impress on them what we regard as the lesson of the past’. He was later praised for his efforts to reach a younger generation of Germans – who had not been responsible for the Holocaust.

Alfred Wiener resigned as Director of the Library in 1961, aged 75. He passed away in 1964 and is remembered for his incredible foresight, acting so early to document the Nazis’ rise to power and persecution of the Jews of Europe. His daughter Mirjam passed away in 2017 and one of her sons, Lord Daniel Finkelstein continues as a Patron of the Library.

Today the Wiener Library continues Alfred’s legacy, as a library of record for scholars, professional researchers, the media and the public, and as a living memorial to the evils of the past by ensuring their wealth of materials is at the service of the future. The Wiener Library engages with people of all ages and backgrounds through an active educational programme, communicating the accessibility, power and contemporary relevance of their collections as a national resource for those wishing to prevent possible future genocides.

With thanks to Wiener Library for their support and help writing this life story.