Ceija Stojka was a Romany Gypsy who was persecuted by the Nazis. She was deported with 200 members of her extended family to Auschwitz where most of them were murdered upon arrival. In later life Ceija Stojka spent her time promoting the rights of Roma people, highlighting through her experiences what can happen when prejudice and hatred are allowed to take hold.

I remember Auschwitz every waking moment of my life. 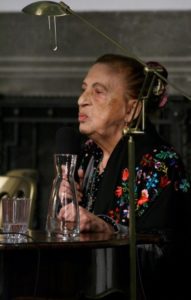 Ceija was born in 1933 in Austria, the fifth of six children. She was part of a Roma family of the Lovari tribe, a group of Roma people which traditionally consisted of horse traders. The family followed a traditional nomadic life travelling around Austria. The year of Ceija’s birth coincided with the year that Hitler assumed power in Germany. This signalled the start of a change for Ceija and her family, as well as the millions of others who were targeted by Nazi policies.

In 1941, when Ceija was eight, her father was taken away from the family and deported to the Dachau concentration camp. Later he was transferred to the Hartheim Castle Euthanasia Centre where he was murdered. In 1943 the remainder of Ceija’s family were deported to Auschwitz-Birkenau extermination camp. Most of the extended Stojka family were sent to their deaths upon arrival at the camp. When her family arrived in Auschwitz, Ceija’s mother lied to the SS, telling them that she was 16 but small for her age when she was actually 10 years old. This meant that she was old enough to work in the forced labour section of the camp, and saved her life.

During their time at Auschwitz, Ceija, her mother and her sister were chosen as part of a group who were to go to Ravensbrück, a women’s only concentration camp. Ceija’s mother again risked her own life to help another woman in their barrack, by disguising the woman’s son as a girl so that the mother and child could stay together. Ceija’s mother greatly influenced her life both during their time in the concentration camps and throughout the rest of her life. In 1945 Ceija was liberated from the Bergen-Belsen camp at the age 12. Out of 200 members of Ceija’s extended family, only Ceija, her mother and four siblings survived.

After the war, Ceija returned to Austria with her brother and sister and made her living selling carpets. The family members who had survived found that there was no acknowledgement of the experiences of the Roma during the war years, and in Austria some of the anti-Romani polices were even continued.

In 1986, at the age of 56, Ceija began to paint; her experiences emerged as central to her work. Her art often reflected the trauma of her experiences, and involved written stories and visual representation as a means of sharing her experiences with the world, whilst also reflecting on our shared humanity.

‘I want to show my own world to the people. It is important to understand that we are all human beings and art allows us to live and exist. Art can connect us.’

Ceija’s work developed the growing awareness of the Roma experience under the Nazis. Her work often depicted life in the camps but also of Romani life before the genocide. She went on to write one of the first Roma autobiographical accounts of the Porrajmos, or ‘devouring’, the term used to describe the genocide of Europe’s Roma and Sinti (Gypsy) population. Ceija’s book We Live in 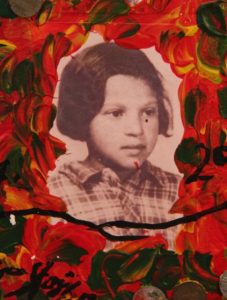 Seclusion: The Memories of a Romani, released in 1988, helped to raise awareness internationally of the attempted annihilation of the Gypsies. Her autobiography and her paintings brought to light these little known experiences in a new and innovative way. In traditional Lovari society Ceija’s writing was seen as a breach of a taboo as drawing attention to oneself was considered a man’s job. Ceija felt that it was fundamental that people were made aware of the persecution experienced by her, her family and around 200,000 other Roma and Sinti Gypsies at the hands of the Nazis. She said:

‘If the world does not change now, if the world does not open its doors and windows, if it does not build peace – true peace – so that my great-grandchildren have a chance to live in this world, then I cannot explain why I survived Auschwitz, Bergen-Belsen, and Ravensbrück.’

Ceija’s art has been exhibited throughout Europe, in Japan and the USA. Ceija died in Vienna in 2013, aged 79. She was a woman who broke taboos in her own community, driven by the importance of speaking out about the persecution of Roma people by the Nazis. She used her life experiences to help challenge ongoing contemporary discrimination of Roma people today.

‘I’m afraid that Europe is forgetting its past and that Auschwitz is only sleeping. Anti-Gypsy threats, policies and actions worry me greatly and make me very sad.’

Photo: © Forget Us Not