Bea Green was born in Munich in 1924. When she was 8 years old, her father was brutally beaten and forced to march through the streets with a sign around his neck. In 1939, Bea came to England as one of the children on the Kindertransport and was lucky enough to be reunited with her parents again after the war. Bea has made England her home and to this day speaks to groups all around the country to raise awareness of the dangers of antisemitism (anti-Jewish hatred) and intolerance.

There was my father’s suit with big blood stains on it. I was eight years old and, as you can imagine, that was a shock.

You can download a copy of this video to use in your HMD activities here.

Born in Munich in 1924, Bea Green had a very happy childhood, and enjoyed school and holidaying with her parents and older brother at their country house in Bavaria. 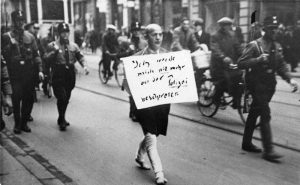 On 10 March 1933, when Bea was 8 years old, a brutal incident took place which would leave a lasting impact on her. Her father, a distinguished lawyer, went to police headquarters to assist a client of his who had been wrongly arrested. He was sent to a room where was badly beaten by members of the SA (also known as the brown shirts), before having his trouser legs torn off. He was then forced to walk barefoot through the streets of Munich with a placard around his neck, saying ‘I am a Jew and I will never again complain to the police’. After parading him around the streets, they stopped, shouted ‘you are going to die, Jew’, and aimed their weapons at him. Bea believes they were hoping he would die from the shock. He didn’t, and he was eventually able to leave and go back to his home.

That day, Bea was at home in bed as she had a cold. She heard the front door of the flat shut, and when no one came to see her she got up, only to see her father’s suit hanging on the door with blood stains all over it. All she can remember feeling is shock. She knocked on her father’s door and walked in, to see him quickly cover himself with his bedsheets so she couldn’t see his injuries.

Bea and her family would later find out that a photograph had been taken of her father during the incident which was printed in an American newspaper. It became a famous image in many countries, where it showed the shocking reality of rising antisemitism in Germany.

Antisemitism was present throughout her otherwise happy childhood. Bea remembers going to their house in a Bavarian village and seeing a sign affixed saying ‘Jews not welcome here’.

In 1938, amidst escalating persecution and legal restriction of Jewish people’s lives, Bea’s school was closed down. Her mother, wanting her to continue her education in some way, pretended that she was 16 so she could have a place at a Jewish cookery school which was still active.

On the night that is now infamously known as Kristallnacht, Bea’s father temporarily fled to stay with his sister in Luxemburg, so Bea and her mother went to stay at her grandmother’s house. Many times that night people came to the house demanding to know where Bea’s father was. Her mother hid the fact that he had escaped, desperately claiming: ‘he’s not here’. Due to her distress, they assumed he was already at Dachau, which, Bea thinks, saved him.

At this point, Bea’s parents were desperately trying to leave Germany. When the opportunity arose to send Bea to England alone, they knew that they would have to part with their beloved daughter so she had a chance of survival.

At midnight on 27 June 1939, Bea left Munich on a train for the UK, as part of the Kindertransport which saw almost 10,000 children brought from Germany and Austria to the UK. Aged 14, this initially seemed like an adventure to Bea, but when the train began to move slowly out of the station, she saw her mother step behind her father to hide her tears. The separation hit Bea for the first time; she realised she would be alone. On the journey, many children were scared and upset. German SS soldiers carrying guns boarded the train as they crossed the border out of Germany, but they were allowed to pass. Later they passed the border with Holland and some Dutch women boarded the train to bring bread and butter and orange juice to the children. Bea recalls: ‘Nothing has ever tasted quite as good as that. It was just amazing.’ The comfort these women offered was both unexpected and hugely appreciated by the many scared young children. On the next leg of the journey, Bea put her arm around a young girl who was crying and saying she wanted to see her mum. Bea remembers: ‘I said, you’ll see her again soon. I was really talking to myself’.

When she arrived at Liverpool Street Station, she was met by the daughter of Mrs Williams, the British woman who had agreed to take her in. Mrs Williams gave her a peck on the cheek – the only time anyone showed any affection to Bea for many years. Throughout her life, Bea has been fascinated by languages – she would later become a linguist and translator. She arrived in the UK not speaking a word of English, but promised herself: ‘I will master this language’. She learnt English very quickly and she maintains a love for the English language today.

Bea was happy to be attending school again. She recalls one incident, however, which took place while she was at school in England, where she saw a magazine called ‘Picture Post’, which shared a number of photographs of what was taking place in Germany. They had printed the now famous image of Bea’s father being paraded through the streets. As Bea had not been in contact with her parents for some time, she began to cry when she saw the photograph of her father. Her teacher took her to the headmistress with the picture, explaining why Bea was upset.

Her head teacher looked at the photo and then looked at Bea and simply stated: ‘that is not your father. That is propaganda.’ Bea said: ‘that was the first time, I was all of 14, I realised people could not understand what had gone on and what was going on in Germany’.

Bea’s parents later managed to flee Germany after attaining visas for Peru, where they were reunited years later with Bea. Bea later settled in south London with her husband and three sons, where she still lives today. She speaks to groups about her experiences, and warns about the dangers of antisemitism and intolerance.

Bea was featured in HMDT’s online film for HMD 2017.