Sir Martin Gilbert was a scholar and historian, who wrote extensively on the Holocaust. 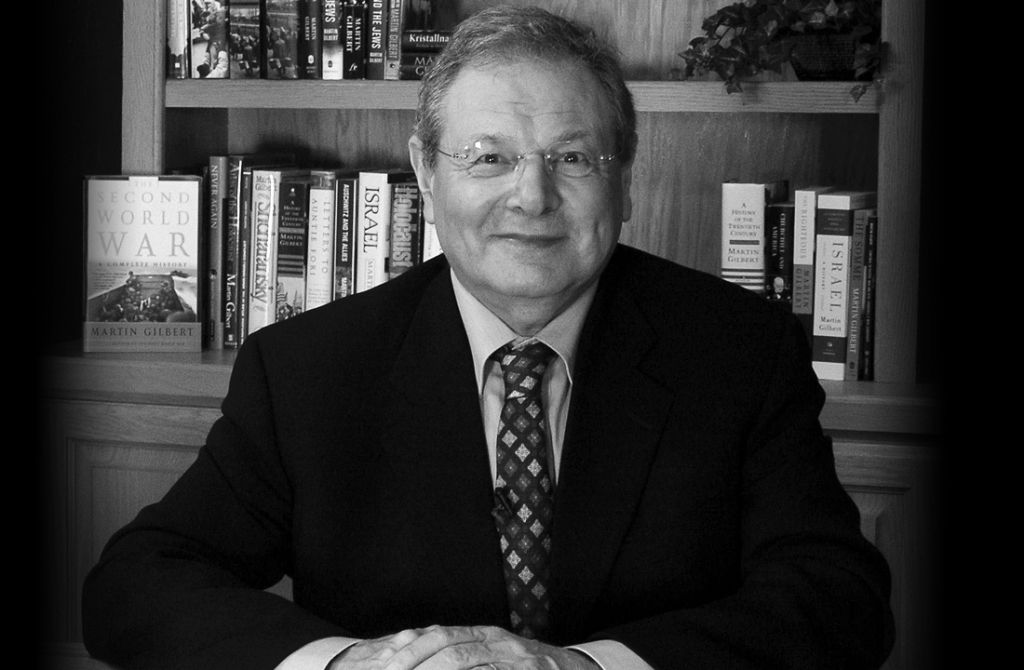 This blog for HMDT has been kindly provided by Lady Esther Gilbert, the creator and editor of three volumes of Holocaust Memoir Digest, based on published survivor memoirs, who was married to Sir Martin Gilbert during the last 10 years of his life. Here, Lady Gilbert introduces an extract from Sir Martin’s book The Righteous: The Unsung Heroes of the Holocaust.

If someone came to my door and needed help, what would I do? If it was during war and the penalty for helping was death, how would I react? This was often the scenario across German-occupied or controlled Europe during the Second World War. And yet people did help.

Sir Martin Gilbert’s book The Righteous: The Unsung Heroes of the Holocaust tells the stories of some of those who offered assistance to their fellow human beings. In the excerpts that follow, from the book’s Afterword, Sir Martin explores the concepts of good and evil, and why remembering the deeds of those who helped is so important.

In 2017 with refugees from war-torn countries homeless and in distress, the lessons taught by the Righteous during the Second World War can give us courage as we are challenged not by history but by the realities we face as a country and as individuals today.

The Righteous: The Unsung Heroes of the Holocaust

Excerpts from the Afterword

What were the motives of those who tried to save Jews from deportation and death? This question is raised with every account of rescue, as the reader, like the historian, wonders whether he, or she, would have behaved in such a courageous manner. First and foremost, the Righteous of this book chose to act; theirs was a deliberate decision to behave in a civilized, humane manner, rather than to do nothing, or to refuse to be involved, or to take the route of barbarism.

In the circumstances of a combination of Nazi rule, SS power and Gestapo terror, inaction motivated by fear cannot be belittled. Those who turned against the tide of terror were all the more remarkable. “We did what we had to do”; “Anyone would have done the same” – the words of many rescuers – mask the courageousness of the course they chose, knowing it to be full of danger, often the danger of execution of their families as well as themselves. Yet these were not foolhardy, rash or intemperate people; most of them made their choice calmly, deliberately and with full realization of the risks – risks that they faced, and took, for months and even years.

Those who put their lives in jeopardy to save Jews were often people who had known those Jews before the war. Some had been close personal friends and neighbours, others had been business partners or business acquaintances, others were teachers or fellow pupils. … Pre-war friendship and acquaintance played a significant part in many acts of rescue; but equally, many rescuers had never before seen the person, or the family, to whom they gave life-guarding shelter.

Mordecai Paldiel, head of the Righteous Among the Nations Department at Yad Vashem since 1982, has supervised the preparation of more than fourteen thousand sets of documentation about those who risked their lives to save Jews. His work brings him in contact every day with stories of incredible courage. “Goodness leaves us gasping,” he has written, “for we refuse to recognize it as a natural human attribute. So off we go on a long search for some hidden motivation, some extraordinary explanation, for such peculiar behaviour. Evil is, by contrast, less painfully assimilated. There is no comparable search for the reasons for its constant manifestation (although in earlier centuries theologians pondered this issue).”

Contrasting good and evil, Paldiel notes: “We have come to terms with evil. Television, movies, and the printed word have made evil, aggression and egotism household terms and unconsciously acceptable to the extent of making us immune to displays of evil. There is a danger that the evil of the Holocaust will be absorbed in a similar manner; that is, explained away as further confirmation of man’s inherent disposition to wrongdoing. It confirms our visceral feeling that man is an irredeemable beast, who needs to be constrained for his own good. In searching for an explanation of the motivations of the Righteous among the Nations, are we not really saying: what was wrong with them? Are we not, in a deeper sense, implying that behaviour was something other than normal?”

Evil instincts are taken for granted; altruistic, humane behaviour appears to need special explanation. It is possible, asks Paldiel, “that we are creating a problem where there ought not to be one? Is acting benevolently and altruistically such an outlandish and unusual type of behaviour, supposedly at odds with man’s inherent character, as to justify a meticulous search for explanations? Or is it conceivable that such behaviour is as natural to our psychological constitution as the egoistic one we accept so matter-of-factly?”

Recognition and remembrance continue into the twenty-first century, even as the number of those rescued, and the number of surviving rescuers, declines. When the Holocaust is finally beyond living memory, the desire to remember and honour those who extended a helping hand will remain. This is a question not only of recognizing individual bravery, but of providing a reminder that it is possible for human beings, in situations where civilized values are being undermined, to find the strength of character and purpose to resist the evil impulses of the age, and to try to rescue the victims of barbarity. Long after the Righteous of the Second World War have died, they will serve as models of the best in human behaviour and achievement to which anyone may choose to aspire. As Pierre Sauvage, one of the youngsters saved in the French village of Le Chambon-sur-Lignon, explained when he made a film about the village, he wanted his son “to learn that the stories of the righteous are not footnotes to the past.” Above all, the stories of the Righteous emphasize, in the words of Mordecai Paldiel, “the belief that man, if he is to be appreciated as a unique creature, is indeed endowed with a great capacity for goodness; for moral and ethical behaviour. This bright and shining side of man, if put to full use, is more than enough to offset the other, and darker, side of man’s behaviour.”

The many survivors who have written to me about their rescuers feel strongly that these individual, selfless acts – the acts whereby they were saved – have not entered sufficiently into the general histories of the Holocaust, or indeed of the Second World War. Put succinctly, as they see it, and as the material presented in this book surely underlines, human decency was also an integral part of the war years; and it was a decency that, had it been on an even larger scale, had it permeated even more deeply into the societies of that time, could have saved many more lives – thousands, even tens of thousands. The story of the Righteous is not only a story of the many successful individual acts of courage and rescue; it is also a pointer to what human beings are capable of doing – for the good – when the challenge is greatest and the dangers most pressing. Each of the nineteen thousand and more known stories – like each of the several hundred stories in these pages – must lead each of us to ask: “Could I have acted like this, in the circumstances; would I have tried to, would I have wanted to?” One can only hope that the answer would have been – and would still be, if occasion rose – “yes”.

For more information about his book The Righteous, please click here.