Holocaust Memorial Day (HMD) 2017 was marked across the UK with thousands of diverse activities involving people from all walks of life.

The theme for HMD 2018 – The power of words – was launched at the Library of Birmingham by Olivia Marks-Woldman and the Lord Mayor of Birmingham, Cllr Carl Rice.

It’s never too early to start thinking about your own HMD activity, so in this blog we reflect on some of the activities organised in every region and nation of the UK for HMD 2017. From trade unions to schools, places of worship to museums, HMD activities reached thousands of people from many different backgrounds.

We hope that these examples of HMD activities inspire you as you look towards HMD 2018. No matter how big or small, how much time you have or what setting you’re in, HMD offers a powerful opportunity for reflection on the past and action today. 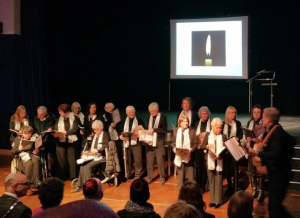 Hertsmere Borough Council’s commemoration began with a candlelight procession by council officials and members of the public. Selma Mustafic read the story of her husband who as a boy survived the Srebrenica massacre. The Borehamwood Community Choir sang two arrangements and a number of HMDT films were shown. MP for Hertsmere, Oliver Dowden, alongside other Hertfordshire dignitaries, lit candles – each representing one of the genocides commemorated on HMD. 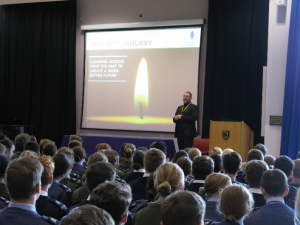 HMDT’s East Midlands Regional Support Worker, Julian Harrison, gave a presentation to more than 300 young people at Welbeck Defence Sixth Form College in Loughborough. Students learnt about the legacy of the Holocaust, its impact today on Jewish communities, and the ongoing fight to combat antisemitism (anti-Jewish hatred). Using relevant photos and individual stories, there was also a discussion on the theme for HMD 2017, How can life go on?

Young people from the Amberley Youth Project joined the charity Working with Men, and gathered to reflect on the Holocaust. Using the HMD 2017 online film as a starting point, the lead youth worker encouraged young people to explore modern day issues of human rights, prejudice and discrimination. 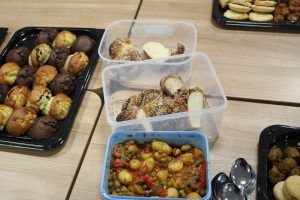 Public and Commercial Services Union (PCS) invited staff and visitors from UNITE and other unions to watch films from the HMDT website. While watching, they shared a buffet of traditional Jewish bread, Challah, and the Rwandan dish Ibirayi n’amashaza. These recipes were taken from HMDT’s recipe cards which include dishes important to communities which were targeted during genocide.

A week-long series of activities in Down County Museum included Auschwitz survivor Mindu Hornick, a first-time visitor to Northern Ireland, speaking movingly to local secondary school pupils about her survival. Primary school pupils took part in cross-curricular workshops led by Community Education Manager, Linda McKenna. The workshops focused on the themes of justice, reconciliation and rebuilding. A spoken word event including a monologue and poetry was organised for adult audiences. 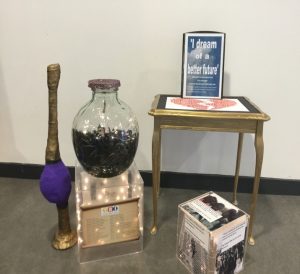 Thomas Ashton School created a display with input from 395 pupils from special schools in Tameside. Each pupil was asked to think of a dream which would make the world a better place, and to write it on a scroll. The scrolls were then placed into a large glass jar sat on a perspex cube, upon which the names and dreams were also printed. The display also featured a smaller cube, with images focusing on the Holocaust and subsequent genocides. 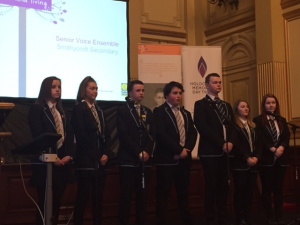 Pupils from all over Glasgow gathered at Glasgow City Chambers to commemorate HMD 2017 through music, poetry and art. The audience heard the experiences of Saskia Tepe, a survivor of the Holocaust, and Umutesi Stewart, who survived the Genocide in Rwanda. Pupils from Lochend Community High School performed a powerful drama called These are my shoes, and musical pieces were performed by Glasgow Schools Strings Orchestra and the Senior Voice Ensemble from Smithycroft Secondary.

North West Surrey Synagogue held a four-day workshop for 530 students from local schools. The workshop sessions featured a film, discussions and survivor testimony. At the end of the programme a memorial candle was lit in memory of those who had died. Each student lit a candle, and then handed a personal message card they had written to the survivor speaker. 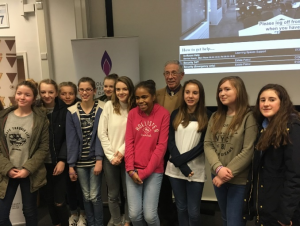 Local secondary school pupils joined students at the University of Exeter for their first HMD Schools Conference, organised by Barnabas Balint, a university student and HMDT Youth Champion Board member. Ernest Simon, who came to the UK on the Kindertransport, spoke about his experiences and shared his memories of Nazi Persecution as a young child. After listening to Ernest speak, academic experts from the university led seminars. Attendees also learnt about the ongoing Genocide in Darfur through a display of drawings by Darfuri refugee children. At the end of the day attendees read poems and wrote pledges on a reflections board. 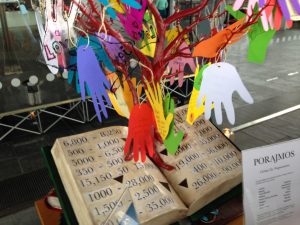 The National Assembly for Wales Cross-Party Group for Gypsies and Travellers organised a vigil on the steps of the Senedd. The Cross-Party Group was supported by South East Wales Racial Equality Council (SEWREC), Bridges, Travelling Ahead, Romani Culture and Arts Company, Unity Project and Gypsy / Travellers from across Wales. SEWREC’s Gypsy Champion produced a book with a tree growing out of it and hand prints forming the leaves. In the book are a series of numbers representing the estimated number of Gypsy, Roma and Traveller victims who were murdered under Nazi Persecution. 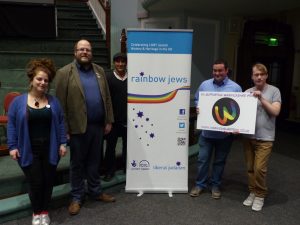 Warwickshire Pride teamed up with Coventry Pride to hold their first HMD event. An evening of talks and performances was held to remember the victims of the Holocaust, with specific reference to LGBT+ people persecuted by the Nazis. The event included a bespoke ballet and jazz dance piece from street dancer Kian-Taylor Jackson, stories and songs from Yiddish singer Rachel Weston and a moving talk from Surat-Shaan Knan, founder of Rainbow Jews. 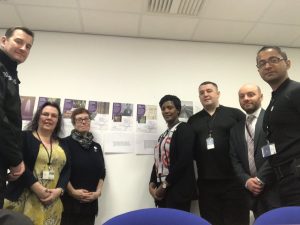 Yorkshire and the Humber

At the West Yorkshire Police Headquarters in Wakefield, an event was held for officers and was also available over Skype. Officers watched HMDT films and shared Life Stories of survivors who they researched personally. After the event, the online film for HMD 2017 was circulated on the staff intranet and emailed to members of the Force’s Equality Board.