80 years on from the massacre at Babi Yar, our CEO Olivia Marks-Woldman OBE and Holocaust survivor Martin Stern MBE, remember the thousands of men, women and children who were murdered. 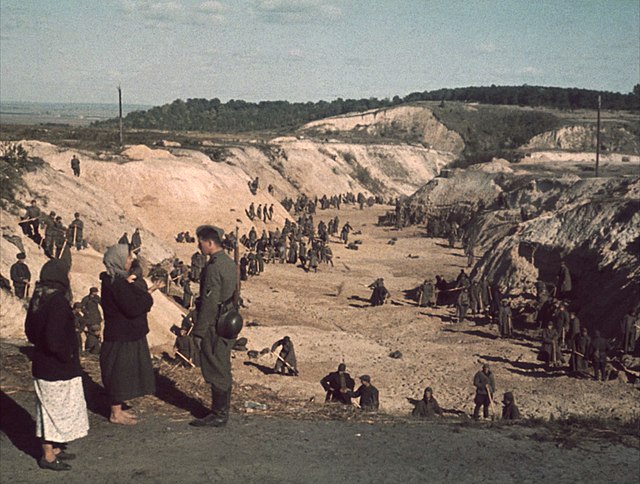 As I reflect on the 80th anniversary of Babi Yar – one of the deadliest single operations during the Holocaust, and yet a massacre not widely known – I think of the hardship and centuries of persecution that Jewish communities endured in the Ukraine. Ukraine had been home to Jewish people from as long ago as the eighth century. But life for Ukraine’s Jews was rarely comfortable, with antisemitic violence especially rife in Soviet Ukraine. Under the Soviets, Jewish life, culture, education and religion were suppressed and outlawed. But the worst was still to come.

In 1939, Stalin pledged to rid the USSR of ‘Jewish domination’ and ordered the purge of the Jewish people across all institutions. But the worst for the Ukraine’s Jews was still to come – as two years later, the Nazis occupied Ukraine and seized Kiev.

The rampant antisemitic violence in the early days of Nazi invasion was the start of a very dark chapter for Ukrainian Jews. And when the Soviet secret police launched a series of explosives in Kiev against the Nazi occupation in September 1941, the explosives were immediately blamed on the city’s Jewish population.

So, in retaliation, Nazi leaders decided to exterminate the Jewish community of Kiev.

‘On Monday, September 29, you are to appear by 7am with your possessions…’

Over the course of two days, from 29 September 1941, more than 33,000 Jewish people were murdered at Babi Yar. At first, notices written in Russian, German and Ukrainian were posted around the city of Kiev, ordering the city’s Jewish population to gather at a ravine on the outskirts of Kiev, called Babi Yar. The notice read:

‘On Monday, September 29, you are to appear by 7am with your possessions, money, documents, valuables and warm clothing at Dorogozhitshaya street, next to the Jewish cemetery. Failure to appear is punishable by death.’

Jewish people were led to believe that, by gathering at the ravine at the ordered time, they would be resettled elsewhere and taken to safety. Instead, they were murdered in one of the single deadliest events of the Holocaust. 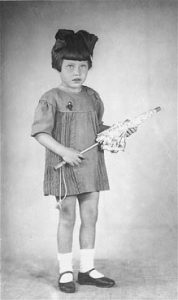 ‘The corpses were literally in layers’

Raisa Maistrenko was one of only 29 people known to have survived. When she was three years old, 18 of her relatives were killed at Babi Yar. ‘Nobody could possibly assume there would be a mass execution’ – she said.

Mania Halef was one of the Jews killed in the massacre. Mania was born in Kiev in 1934 and was just seven years old when she was murdered. Very little is known of the Halef family’s experiences before and during the massacre, as well as those of the other victims, whose life stories we will never hear.

One witness to the massacres, a truck driver, gave the following account:

I watched what happened when the Jews – men, women and children – arrived. The Ukrainians led them past different places where they had to remove their luggage, their coats, shoes, and overgarments and also underwear… Once undressed, the Jews were led into the ravine which was about 150 meters long and 30 meters wide and a good 15 meters deep… When they reached the bottom of the ravine they were… made to lie down on top of Jews who had already been shot. That all happened very quickly. The corpses were literally in layers. 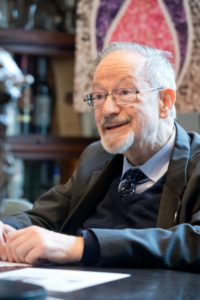 I survived the Holocaust because of highly untypical events which saved my life. At Babi Yar there was no opportunity for such untypical events for the Jews of Kiev. I now have three children who contribute to society and seven grandchildren who can do so in future. Babi Yar victims had no descendants. In remembering Babi Yar, we should think of the rich culture and future lives destroyed by the delusional mass belief in Nazism and of the failure to stop its rise to power.

80 years on, today we remember this horrific massacre.

To mark this anniversary, a new synagogue has been built at the site. A memorial centre and museum complex are planned, to honour those who were murdered, simply for being Jewish. It is dangerous that massacres like Babi Yar are still not well known enough today, when extremism, antisemitism, racism and so many forms of hatred are still fought daily. It is dangerous to forget history. Our duty is to keep this memory alive, remember those who were murdered and learn from genocide – for a better future.

Martin Stern MBE was born in 1938 and lived in Holland. He survived camps at both Westerbork and Theresienstadt.