Education charity Into Film has helped bring the 2004 documentary Paper Clips to pupils at a school on the Isle of Wight, teaching them of the atrocities committed by the Nazis and underlining the importance of Holocaust Memorial Day (HMD).

The organisation has partnered with us at Holocaust Memorial Day Trust to help raise awareness of the Holocaust through showing films in the classroom.

The moving image can be a very powerful medium through which to leave a lasting impact on young people, and key to this is choosing the right title.

With the 2004 documentary Paper Clips, pupils aged nine to 11 at the Holy Cross Roman Catholic Primary School witnessed the story of a group of children from Whitwell, Tennessee who embarked on the mammoth journey to collect six million paper clips, one to represent each Jewish person killed during the Holocaust.

Kathy Mather, teacher and film club leader at the school, explained that she chose the film as it explores the activities of similarly aged children who were affected so much by the story of the Holocaust that they wanted to show their ‘understanding and respect for such a horrific period of history’.

Kathy said: ‘All of the children watched the film intensely and showed a great deal of empathy for the survivors of the Holocaust who spoke in the documentary.

‘As the documentary went on and the stories of the survivors were told, a number of children became very emotional as the realisation of what they went through became apparent. 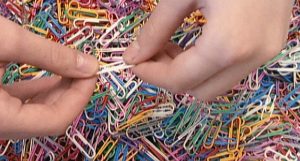 ‘From watching this film it has highlighted to the children the need to have HMD each year so that the people who lost their lives will forever be remembered, and we as a society can learn from it so such a tragic event doesn’t happen again.’

After viewing Paper Clips, the pupils were all given a paper clip and encouraged to wear it as a discussion piece to ensure they continue to reflect and talk about the topic.

One 10-year-old student Alex also reviewed the documentary for Into Film, winning the Review of the Week award.

Alex said: ‘I watched this film today and I cried, I thought that it was the worst thing that happened in history.

‘This is a film about some school kids who learn about the Holocaust and work on a project to have six million paperclips to represent the six million people who were tortured.

‘My fantastic teacher gave us each a paperclip after the film, and I will wear it on my shirt collar today, tomorrow and then on 27 January every year.’

This goes to show how effective film is as a tool to educate children aged as young as nine about the Holocaust.

To set up a free film club for access to thousands of free films and education resources visit FILM CLUB.

HMDT’s film for HMD 2014 explores the theme of Journeys and features not only a survivor of the Holocaust, but also of the Genocide in Cambodia and the Genocide in Rwanda. You can also explore the film section of the website for more video resources that can be used in the classroom.