Sir Leigh Lewis, Vice Chair of Holocaust Memorial Day Trust (HMDT), reflects on how the 2019 HMDT AGM brought about lively discussion and a renewed determination to keep the memory of the Holocaust and subsequent genocides alive. 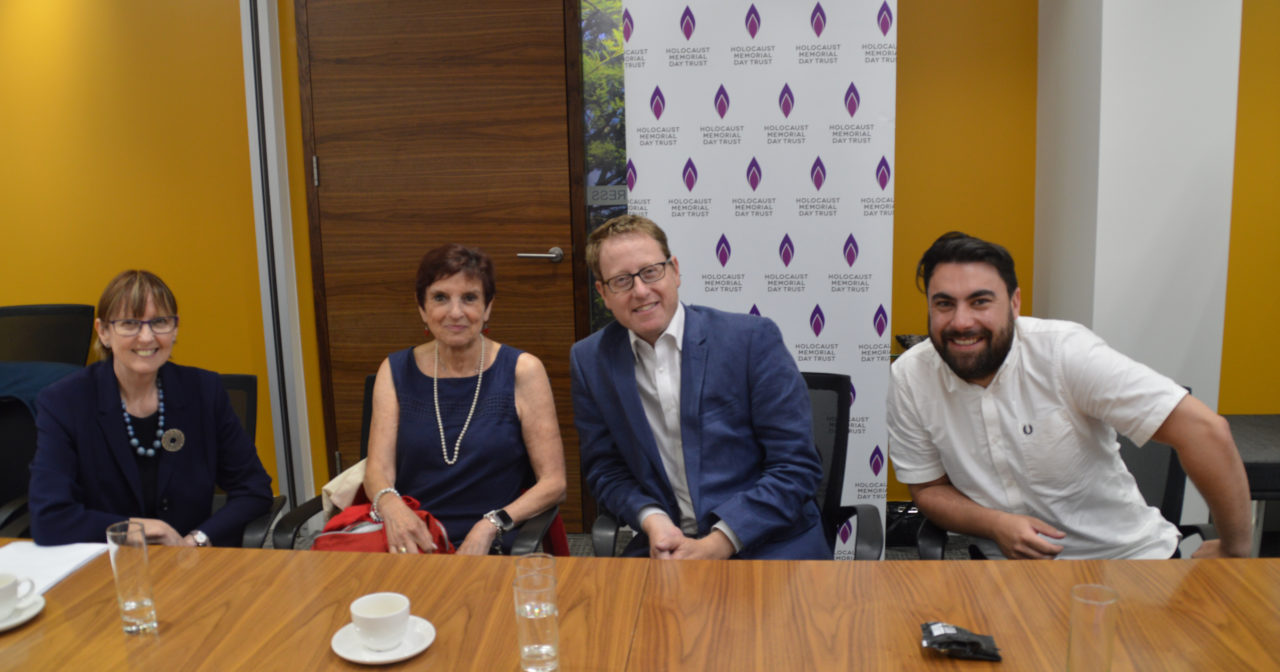 Janes Clements, Dame Helen Hyde, Jonathan Freedland and Joe Mulhall, who were on the discussion panel at the HMDT AGM.

Let’s face it - and I speak as something of a veteran - most charity AGMs are intensely boring. They have to be held but, in a well-run charity, they are pure formality. The accounts have to be adopted but they have long since been signed off in all but name. Retiring trustees are either formally re-elected or bid farewell. The Chair thanks everyone - somewhat over-effusively - for their efforts and thankfully declares the meeting closed. The whole process may well have lasted only 15 minutes or so but at least there is then a cup of tea.

But this year - at the inspiration of our Chair, Laura Marks – Holocaust Memorial Day Trust (HMDT) decided to do things somewhat differently. We did duly despatch the formal business in the statutory 15 minutes but then, instead of immediately heading for the tea and biscuits, we heard from a series of speakers who we had invited to speak about the opportunities and challenges we face.

One of our trustees, Joe Mulhall, who is also a senior researcher at Hope not Hate, spoke of the threat from the far-right; Jonathan Freedland of the Guardian spoke about the risks posed to us by the rise of the ‘fake news’ phenomenon; the distinguished educationalist, Dame Helen Hyde, spoke about trends in genocide education; and Jane Clements the prominent inter-faith speaker, reflected on how Holocaust remembrance is viewed by faith communities.

Our speakers, although keeping to an allotted 10 minutes each, covered a lot of ground. But each, in different ways, spoke of the threat we face of the Holocaust becoming seen as old, and increasingly irrelevant, history. Joe Mulhall said that the threat was no longer the classic, David Irving, Holocaust deniers but now much more the ‘maybe it happened but I couldn’t care less’ rhetoric of the new far-right. Jonathan Freedland described how in Donald Trump’s fake news world, millions of people simply dismiss any facts or evidence presented to them that they find inconvenient, on the Holocaust or anything else, as mythical. Helen Hyde worried that students were increasingly telling teachers that they didn’t think the Holocaust could happen in the modern day and the importance of not teaching about the Holocaust as if it were just a historical event. Jane Clements reflected that even in sympathetic faith communities it was all too easy for the Holocaust to be seen as simply a ‘Jewish problem’.

All of these themes were picked up in the lively discussion that followed. Our Honorary President and survivor of the Holocaust, Sir Ben Helfgott, worried what would happen when there were no longer any survivors with us. Others spoke of the risks of a society in which there is a growing, pervasive, ecosystem of fact denial, and where ever more outlandish conspiracy theories risk increasingly discrediting actual truth. Several people talked of the intolerance and contempt for rational debate displayed equally by both the far-right and the far-left. The mood was pretty sombre.

But our conclusion was not that all of this rendered our work meaningless. On the contrary it was that it made what we do, and what we stand for, more important than ever. There was a determination in the room that we will and must keep the memory of the Holocaust, and the subsequent genocides, alive. As one speaker said “Holocaust Memorial Day Trust does a brilliant job. We can’t debunk every myth but we can make people care”.

As we did, somewhat later than in the standard AGM model, head for the tea and biscuits we felt that we had used our AGM to provide a forum for a debate of real value. Our model is available, at a fee, to other charities whose AGMs are imminent!