The Srebrenica memorial centre was created in October 2000, barely five years after the genocide that took place there. The cemetery, which now holds over 5,000 of the 8,000 victims, has since been joined by a memorial room and exhibition. In spite of local controversy, it has encouraged many survivors to return to the town, and draws in visitors and dignitaries from across the world to hear its message.

We pray to almighty God,
May grievance become hope
May revenge become justice
May mothers’ tears become prayers
That Srebrenica
Never happens again
To no one and nowhere

From the Srebrenica Prayer, displayed at the memorial site in Bosnian, English and Arabic 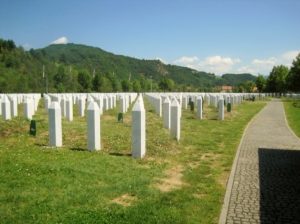 The Genocide in Srebrenica was the worst massacre in Europe since the Second World War. Over the course of five days in July 1995, this scenic

corner of the Balkans bore witness to the murder of around 8,000 Bosnian Muslim men and boys by Bosnian Serb forces. Many were rounded up, separated from their loved ones and murdered.

Srebrenica survivor Emir Suljagić calls Srebrenica ‘everything that happened over three years in Bosnia culminated into one place and one time’. The site is so iconic that the clamours of the survivors and the bereaved for a memorial could not be denied, as they have been at the sites of so many other atrocities in Bosnia-Herzegovina. And so, the Srebrenica-Potočari Memorial Centre and Cemetery to the Victims of the 1995 Genocide was established in October 2000.

The site of the massacre lies within the semi-autonomous Republika Srpska, the region of Bosnia-Herzegovina given to the control of the Bosnian Serbs as part of the Dayton peace agreement. With perpetrators still at large, and genocide denial and justification still rife amongst Bosnian Serbs, there was no way that the government of Republika Srpska would admit guilt by agreeing to a memorial of its own free will. If it had not been for the involvement of the international community, the memorial may never have come into being at all.

The UN High Representative at the time, Wolfgang Petritsch, recognised the importance of a memorial and designated the site, in spite of vigorous local Serb opposition. Much of the funding came from foreign embassies. The first stone, simply bearing the date of the genocide, was laid in 2001.

The exact site of the memorial, in the village of Potočari, was chosen by the survivors and bereaved relatives because it was the last place many of them saw their loved ones alive. It was here that a small and under-resourced unit of Dutch UN soldiers had been based, tasked with keeping the peace in the so-called UN ‘safe zone’. When a desperate crowd had gathered here, seeking sanctuary, the UN soldiers did nothing to prevent them being led away and killed. 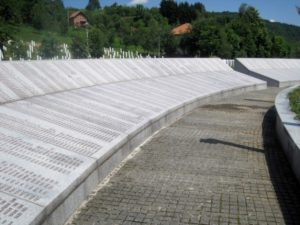 The memorial began as a cemetery, with the first 600 burials of exhumed remains taking place on 31 March 2003. The site was officially opened by former US president Bill Clinton on 20 September that same year, along with a photographic exhibition also donated by the US. Every year since, as more mass graves have been exhumed and remains identified, further burials have taken place at the 11 July commemoration. Over 5,000 individuals have now been interred.

Alongside the rows upon rows of gleaming white gravestones, stands a sweeping wall of names of the dead. A second marker stone bears the figure of 8,372 – the number of the dead and missing. Many of these men were already refugees when they were killed.

On 9 July 2007, a memorial room was opened. The initiative came from Paddy Ashdown, who had succeeded Petritsch as UN High Representative, and was completed with assistance from the Imperial War Museum (IWM), London. Ashdown had visited the IWM’s Holocaust Exhibition, and felt something similar was needed at Srebrenica. While the cemetery served the fundamental need of survivors to gather, mourn and heal, the memorial room would convey the site’s message to the world.

The memorial room lies across the road from the cemetery. It consists of two black ‘towers’, one of which serves as a viewing space for a short film. The other tower houses 20 cases, each of which displays a photo, personal story and exhumed object associated with one of the victims; watches, glasses, cigarette lighters and even a wedding ring. The cases illuminate normal lives blown apart, and highlight painful partings and last moments; 20 personal tragedies amongst 8,000.

Since the memorial centre was established, it has served as a symbolic place marker that has encouraged increasing numbers of Bosnian Muslim refugees to return to Srebrenica. It has made them feel the town is somewhere they belong once again, and to some extent has reversed the process of ethnic cleansing to which it bears witness. However, the memorial’s existence has not been untroubled. Few amongst the local Bosnian Serb community have visited the site, and many continue to deny the genocide even occurred. As a direct response, counter-memorials have been raised in nearby villages to Serb victims of the war, a situation which many see as a continuation of ‘war by other means’. In 2005, two large explosive devices were even found and disarmed at the Srebrenica memorial, days before the annual commemorative ceremony.