Life can go on if there is courage to embrace tomorrow with love, peace, dignity and respect.

Hope Azeda was born in the early seventies in the western part of Uganda. Her parents, Norman and Beatrice, were born and lived in Rwanda but fled to neighbouring Uganda in 1959 as a result of increasing ethnic tensions following a Hutu uprising against Tutsi leadership.

Hope grew up with eight brothers and two sisters. Her mother was a midwife and Hope lived with her in the hospital she worked in. Hope’s father worked away from home, teaching maths and French in a refugee settlement. Due to various coups d’état in Uganda, Hope’s family frequently moved. As a child she was able to embrace this by making new friends and discovering new ways of living in each village.

Hope’s passion and talent for the arts flourished while attending the Namasagali College in Eastern Uganda. She believes her studies here ‘unearthed the artist she has become today’ and inspired her to pursue a career in music, dance and drama.

Growing up, Hope’s relatives had told her how beautiful Rwanda was, so it had always been a childhood dream of Hope’s to return to Rwanda – a place she called home despite never having lived there. In 1998, Hope followed her dream and moved to Kigali. It was not easy as she had no friends there and was not fluent in Kinyarwanda or French (two of the languages spoken in Rwanda). When she arrived the beautiful Rwanda she was expecting was all gone. For Hope, the Genocide in Rwanda is a shadow that ‘walks in her’ and has become a canvas of many of her writings.

When her parents moved to Uganda, many of Hope’s relatives remained in Rwanda and became victims of the genocide. In 1994, following the genocide, the UN Security Council set up the International Criminal Tribunal for Rwanda and to this day 93 individuals have been indicted and 61 have been convicted. But for Hope, justice is the courage to let the memories of lost loved ones take their place in our hearts and minds, rather than those who took their lives away. Forgiveness is, in Hope’s opinion, the ‘best bridge to living freely’.

Hope believes that life can go on if there is courage to embrace tomorrow with love, peace, dignity and respect.

Soon after her return to Rwanda, Hope founded the Mashirika Performing Arts Media Company in Kigali. The company uses the arts as a tool for social transformation. Partnering with organisations such as the Aegis Trust and the Ministry of Justice, Mashirika has produced many films, plays and performances based on the causes and prevention of genocide, the Gacaca proceedings (a system of community justice in Rwanda, to help with community rebuilding) and the importance of unity and reconciliation. ‘Africa’s Hope’ created by Mashirika, was performed by a cast of over 1000 people in Kigali for the 10th anniversary commemoration of the Genocide in Rwanda and again in Edinburgh for the G8 World Summit in 2005. It also recently toured 15 schools and theatres in the UK.

Mashirika uses performing arts to engage the audience, and teach about important issues. Through its use of interactive theatre and forum theatre, Mashirika is at the forefront of theatre for development; demonstrating their mission that performing art can be both entertainment and a tool for social transformation, as well as a source of employment. 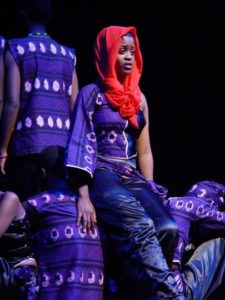 It is important for Hope that her plays have a moral or a deeper meaning. ‘Amashyiga ya sehustitwa’ is a play Hope wrote while at university. The main protagonist, Sehustitwa, wanted to cook for his sons so placed a pot of food on top of three cooking stones, as is traditional. To his disappointment, the cooking stones started fighting over which stone would support the pot. Sehustitwa had to remind the stones that in order for the meal to cook, the pot needed the support of all three stones. Another play, ‘Bridge of Roses’, challenges the audience to question their choices in doing right or wrong and reminds them that in every bush of thorns there is always a rose if there is the will to look for it.

In 2015 Hope launched what has now become the annual Ubumuntu Arts Festival at the Kigali Genocide Memorial Centre. Ubumuntu means humanity and through workshops, performances and panels the free festival creates opportunities for artists to network, raises awareness of international stories of humanity and encourages healing and peace building after violence.

Hope finds her work very rewarding and she is most inspired and touched when audiences resonate deeply with performances that tackle subject matters calling for humanity.

Hope lives in Kigali with her husband and two daughters. When time permits, they enjoy spending weekends by Lake Kivu, on the border between Rwanda and the Democratic Republic of Congo.