Abdulsalam sought asylum in the UK after experiencing violence at the hands of the Sudanese Government in their attacks against the black population in the Darfur region of Sudan. Abdulsalam shares his testimony in the hope that the raising awareness will provoke the world into responding to the genocide that continues to unfold there today.

Even the stories that reach European countries are very rarely acted upon and often soon forgotten.

Abdulsalam was born in November 1982 in his hometown of Kutum in the north-eastern part of Darfur, west Sudan. He is a black Muslim from the Tunjur, a farming tribe and one of the many ethnicities that make up the diverse region. 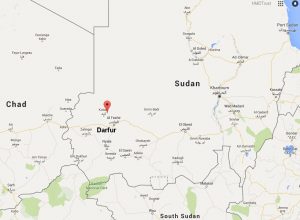 Abdulsalam recalls his local area changing from a young age. In 1985 a school, which was mainly for black Sudanese students, was drastically changed when a park adjacent to the school became a field for livestock. This field had often been used by the school’s students for sports, but any attempts at protest or defiance to this change were met with fierce reprisals. Violently enforced discriminatory policies like this became more frequent.

In 2002 he remembers a friend, a businessman who had been to Nigeria, was stopped by the Sudanese police as he returned to Sudan. After questioning, he was arrested and brought to the police station where he was kept for three days. On release he discovered that the two lorries and the entirety of his newly acquired stock had been stolen. Abdulsalam suggests the motivation for this selective stop, arrest and theft incident was that his friend was non-Arab.

After hearing of continued theft by the police, locals decided to retaliate and attacked various police check points. Abdulsalam recalls government reprisals being swift and hugely disproportionate. Entire villages were set ablaze and random shootings of civilians occurred. The majority of the violence was confined to the more rural areas around Kutum.

By 2003, the conflict between the sedentary black farmers and the mainly nomadic Arabs in Darfur had become a civil war. Black farmers believe the Sudanese Government and its policies are racist, favouring Arabs over blacks, and have the intention of carrying out genocide and enslavement of the black population. In early 2003, rising tensions came to a head when two Darfuri rebel groups, the Sudan Liberation Movement and the Justice and Equality Movement (JEM), launched attacks on Sudanese Government military targets.

The Sudanese Government reacted by arming militia – the Janjaweed (militia groups formed of nomadic Sudanese Arab tribesmen) – and directing them to attack the black people in Darfur who were perceived to be supportive of the rebels. The Janjaweed have destroyed hundreds of villages and murdered thousands of people in atrocities that have caused a humanitarian catastrophe in Darfur.

It was around this time that Abdulsalam first witnessed the use of a jet fighter, when bombers and attack helicopters were launched from nearby Al-Fashir, the capital of Darfur. He recalls that the jet fighters were restricted to short missions due to the heat and so damage was less extensive than when ground forces were deployed, but the psychological trauma was far greater. It was difficult to predict where they would land, however when they did the impact was catastrophic.

In 2008, after JEM attacks were carried out in the Sudanese capital Khartoum, the government reprisals became more severe. Many suspected men of fighting age were selected for interrogation and beaten. Whilst travelling for business, Abdulsalam was arrested. He explains how it felt as if the whole population was being held responsible for the attacks.

Abdulsalam was transferred to a prison in Khartoum and held there for a further three months where he was made to perform manual labour before being transferred to a prison in Atbara and held there for another two months. At Atbara work and living conditions were worse. After the two-month period he was transferred once again to a prison in Port Sudan where treatment became worse again and the workload was increased. Prisoners were required to work collecting salt from the Red Sea, often for hours at a time in extreme heat with very limited access to water. The prison has had a number of deaths due to inmate conditions and treatments. Abdulsalam was kept at the prison in Port Sudan for almost three months.

One day while undertaking backbreaking work collecting salt, Abdulsalam decided to try to escape. He had an uncle who owned a shop in the business district who he knew he could rely upon for support and sanctuary. He ran until he arrived at his uncle’s house where he was quickly taken in and provided with food, water and a change of clothes. It was quickly decided that staying in Sudan as a political prisoner on the run was not a safe option so Abdulsalam’s uncle started to plan buying him safe transit to Europe.

Abdulsalam has little knowledge of the route that he took to get to the United Kingdom but he remembers travelling by boat to mainland Europe. He posed as a dock worker and was bundled into a crate belonging to one of the freight vessels docked at the quayside. He was supplied with minimal provisions and told to keep quiet in all circumstances. The journey lasted many days, but Abdulsalam couldn’t see outside the crate so he’s unsure of exactly how long. Upon docking in Europe Abdulsalam was quickly transferred to a lorry and again provided with minimal food and water. He stayed in the lorry until the doors were opened somewhere near Battersea in south London.

In 2009, the International Criminal Court (ICC) issued a warrant for the arrest of Sudan’s President Omar al-Bashir on charges of War Crimes and Crimes Against Humanity in Darfur. A second round of indictments was issued by the ICC in July 2010, incorporating charges of genocide.

Abdulsalam suggests the violence has become much more widespread now, and takes many forms. Communities not only fear physical aggression, but the economic ramifications too.

‘Food is becoming increasingly expensive, and the staple food of many poorer communities are not available in large enough quantities,’ said Abdulsalam.

Many people in Darfur suffer from malnutrition and health care is nonexistent. Owning a business relies upon being able to pay off the right people and having friends in the right places. If you have no contacts or money you are often asked to pay taxes by various militias and self-appointment officials. He says random shootings are also frequent, people come up to you and ask for a lighter, if you don’t have it they will ask why and then beat you or shoot you in the head.

The United Nations (UN) estimates that roughly 4.7 million people are still affected by the conflict and denied their basic human rights. It is estimated that 300,000 Darfuri refugees are living in camps in neighbouring Chad and 2.7 million have been internally displaced. Abdulsalam believes that United Nations Mission in Darfur (UNAMID) forces are spread too thinly and have conflicting responsibilities.. He explains that UN forces are often unable to intervene and stop situations from escalating because it falls outside of their mandate.

Six years after Bashir’s initial indictment he has not been arrested, and the situation in Darfur remains bleak. In December 2014 the ICC announced that they would be hibernating the case, frustrated with the UN Security Council’s inaction in the region. The number of peacekeepers on the ground has also been reduced in response to pressure from Bashir. It now looks as though survivors like Abdulsalam will have to wait even longer for justice and a safe and peaceful place to return home to.

Abdulsalam still speaks to his family in Sudan about four times a week. He shows us a photo of his beautiful son Nelson (named after Nelson Mandela) who still lives in Sudan and who Abdulsalam has never met.

He is keen to return to Sudan one day, though he is currently still wanted by Sudanese authorities so any trip would be of great personal danger. There is very little infrastructure and in the Kutum area, damage from fighting and sabotage is severe and there are few funds allocated for health, education and food issues.

‘I would like to return with funding to Kutum and set up free health care facilities. There is little to no health care even for the most basic conditions and this need to change for people’s lives to get better,’ says Adulsalam.