This week the Foreign and Commonwealth Office (FCO) are holding the Global Summit to End Sexual Violence in Conflict, highlighting the way that sexual violence and rape is used as a weapon during conflict – destroying lives and damaging communities. 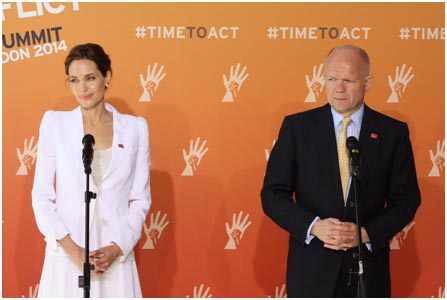 What is sexual violence?

The term ‘sexual violence’ refers to many different crimes including rape, sexual mutilation, sexual humiliation, forced prostitution and forced pregnancy. Experienced within and beyond the confines of conflict, it is a hugely traumatic and destructive violation of human rights. This animated, hand drawn video released to coincide with the launch of the FCO’s #TimetoAct campaign is a deeply moving introduction to the topic.

Sexual violence is a tool of genocide:

When genocide takes place, ethnic groups are polarised, dehumanised and ultimately destroyed, and sexual violence often has a significant role in this. Rape and sexual violence is a common theme in genocide survivor testimony, strategically exerted upon victims as a means of intimidation and control. It meets the aims of perpetrators of genocide by destroying communities: breaking down identity and driving people from their homes in campaigns of terror. For those who survive their injuries, the aftermath of sexual violence leaves an oppressive legacy on whole communities, resulting in both mental and physical trauma, while rape often leads to sexually transmitted disease, causing further stigmatisation, shame and humiliation.

The 1994 Genocide in Rwanda was one of the most prolific cases of rape used strategically in genocide. The United Nations (UN) reported that around 250,000 women and girls in Rwanda were raped and that, ‘rape was systematic and was used as a 'weapon' by the perpetrators of the massacres [...]; rape was the rule and its absence was the exception.’

Daphrose, is one of those thousands of women. In her testimony she explains how both her and her sister were raped and contracted HIV. She said: ‘I was 12 years old in 1994. My parents and the other members of my family were killed right before my eyes. My elder sister and I were raped and through this we both contracted AIDS.’

Rape was used as a strategic instrument of war by the Bosnian Serb military too, as part of its campaign against the country's Muslim population. There were reports in the media of detention camps specifically for the purpose of raping women and UN figures suggest that between 1992 and 1995 up to 60,000 people were raped in the former Yugoslavia.

Although it has not formed part of the mainstream discussion so far, survivor testimony has attested to rape taking place in the Holocaust and under Nazi Persecution, particularly in camps and ghettos, and it has been highlighted in the book Sexual Violence Against Jewish Women during the Holocaust. The quote below is a testimony from that book by a survivor named Sara M, who was taken from her barracks to a small room where she was sexually abused:

‘There were two men there and there were some other people in the room, I think. I was put on a table. From what I remember, [it was] a table or it could have been a high table. I was very little so it seemed like it was very high up from where I was, and I was very violently sexually abused. And I remember being hit, I remember crying and I wanted to get out of there.’

Its lack of prevalence in the common understanding of the Holocaust could be due to a number of reasons. First, rape was not a part of the Nazi genocidal strategy, unlike in Rwanda and Bosnia. Racial laws stated that sexual relations between Jews and non-Jews were illegal and Nazi propaganda labelled Jewish women as ‘dirty’. Yet, rape still took place, so why did women not testify? One key issue is perhaps shame, this is something that limits accountability for rape and sexual violence in societies throughout the globe. The survivors may not have wanted to share their horrific stories because they did not want their family and friends to know. For others, they may have felt their personal suffering was too minor to mention when contrasted with the scale and enormity of the Holocaust.

Jews and other victims of Nazi Persecution were subjected to other forms of sexual violence beyond rape, such as mutilation and forced sterilisation, while those women found to be pregnant were often coerced into having abortions. Some female survivors of the Holocaust found they were unable to have children after their trauma, which has been attributed to the years of malnutrition they suffered, or the medical experiments which they were forced to undergo.

Today, genocide continues to take place in Darfur, and the UN believes thousands of women and girls have been systematically raped in the conflict by the Janjaweed militias, as well as the Sudanese Army.

Survivor Dr Halima Bashir testifies to the shocking rape of young girls at school and later, her own experience of rape, in her book Tears of the Desert. She said: ‘More than 40 girls were brought in to the clinic, having been raped and attacked repeatedly. There were not enough beds for them all. The youngest of the girls was just seven, the oldest 13.’

The impact of rape on those in any community is hugely destructive, but in traditional societies like the black African tribes of Darfur, rape survivors often experience further rejection by husbands, families and communities, leading to a life solitude.

The legacy of sexual violence corrodes communities for generations:

Even after the end of conflict, the legacy of sexual violence continues, creating both physical and psychological scars and destroying individuals as well as communities. This is what makes it such an effective tool for genocide perpetrators. Attacking communities at their heart, sexual violence destroys group solidarity. It shames and emasculates men by demonstrating an inability to protect the women of their family, and subjects women and to a life of isolation. Indirect victims of sexual violence include child witnesses, traumatised after being forced to watch their family members subjected to such extreme violence.

Complex relationships result when women are raped by the men who killed their families, leaving them pregnant with a child who carries the blood of a man who ruined their life. This was particularly the case in Rwanda, and it was not unusual for the mothers to reject their child born of rape, and in at least one case even trying to kill them. Survivors’ Fund (SURF) estimates that between 250,000 and 500,000 women were raped during the genocide, and up to 20,000 children were born as a result of rape. These children are part of the legacy of the Genocide in Rwanda, and supporting them poses a huge challenge.

Women subjected to rape in Rwanda also faced another devastating legacy of the violence they endured, that of HIV/ AIDS. The Association of Widows of Genocide found that among their members four in five had been raped and two-thirds were HIV positive. This was an intentional move by genocidaires who left an intergenerational legacy of mothers passing the virus on to their children.

The ongoing trauma of those women who survived the Genocide in Rwanda is compounded by their probable impoverishment. Although the UN Development Programme reports that Rwanda has reduced the number of people living in poverty by 13% between 2008 and 2012, some of the poorest citizens are female genocide survivors, many of whom still suffer in the aftermath of sexual violence.

Women and girls are not the only victims of sexual violence:

Although sexual violence is more commonly experienced by women, the experience is not unique to them. Pierre Seel was persecuted for being gay by the Nazis. He was tortured and raped. He says in his book I, Pierre Seel, Deported Homosexual: ‘Outraged by our resistance, the SS began pulling out the fingernails of some of the prisoners. In their fury they broke the rulers we were kneeling on and used them to rape us.’

Male survivors of sexual violence often experience a double stigmatisation as their gender role within the family unit is perceived to be that of the protector – many end up fleeing from their communities due to shame.

Bearing witness to the women of a community being raped can also have grave effects on the husbands, sons, fathers forced to watch. Seeing their loved ones fall victim to sexual violence without being able to protect them may leave the men ridden with guilt, ruining their reputation within the community. While the emotional damage caused to the men cannot be compared to the suffering of the direct victims, it illustrates the all-encompassing nature of sexual violence on the communities it affects.

The problems in prosecuting sexual violence:

Prosecuting sexual crimes often brings specific challenges. Evidence can be lacking and survivors who have experienced rape are often stigmatised, rejected by their families and silenced by the community, which discourages them from pursuing justice.

In post-genocide Rwanda, communities were left to prosecute their own perpetrators through the gacaca community-based court system. This left restorative justice to local village elders who passed judgement on each case. The arrangement has been problematic at addressing the taboo subject of rape. Testifying against such crimes involves women giving evidence in front of their communities. This process, which involves public humiliation and the possibility of reprisals against already vulnerable individuals, has deterred many victims of rape from seeking justice.

However, progress is being made to bring perpetrators of rape during genocide to justice by ending stigma and encouraging women to come forward. ‘Rape is still a taboo subject... but people are starting to talk about it. Things are changing even if there is still a long way to go,’ Samuel Munderere of SURF told the AFP news agency.

In 1998 the International Criminal Tribunal for Rwanda became the first international court to find an accused person guilty of rape as a crime of genocide, while the first instance of a conviction of rape as a crime against humanity was made by the International Criminal Tribunal for the former Yugoslavia in 2001. These are significant steps towards demonstrating that rape and sexual violence during conflict will not be ignored.

This week the Foreign Secretary William Hague and Angelina Jolie, Special Envoy for the UN High Commissioner for Refugees, are co-chairing the Global Summit to End Sexual Violence in Conflict. The event at ExCel London will be the largest gathering ever brought together on this subject, with a view to creating irreversible momentum against sexual violence in conflict and practical action that has an impact on the ground.

The summit is a global call for all countries to help end the use of rape as a weapon of war. It puts the survivors of sexual violence at the centre of war crime investigation, shifting the stigma of shame away from survivors and onto the perpetrators of these horrendous crimes.

Watch the campaign film and show your support by sharing it on Twitter and Facebook using the hashtag #TimetoAct.

You can also get involved by addressing the subject of sexual violence when marking Holocaust Memorial Day (HMD). On HMD we remember the experiences of all whose lives were lost or irreversibly changed during the Holocaust and genocides in Cambodia, Rwanda, Bosnia and Darfur.