This blog was written by HMDT’s Youth Champion Board. 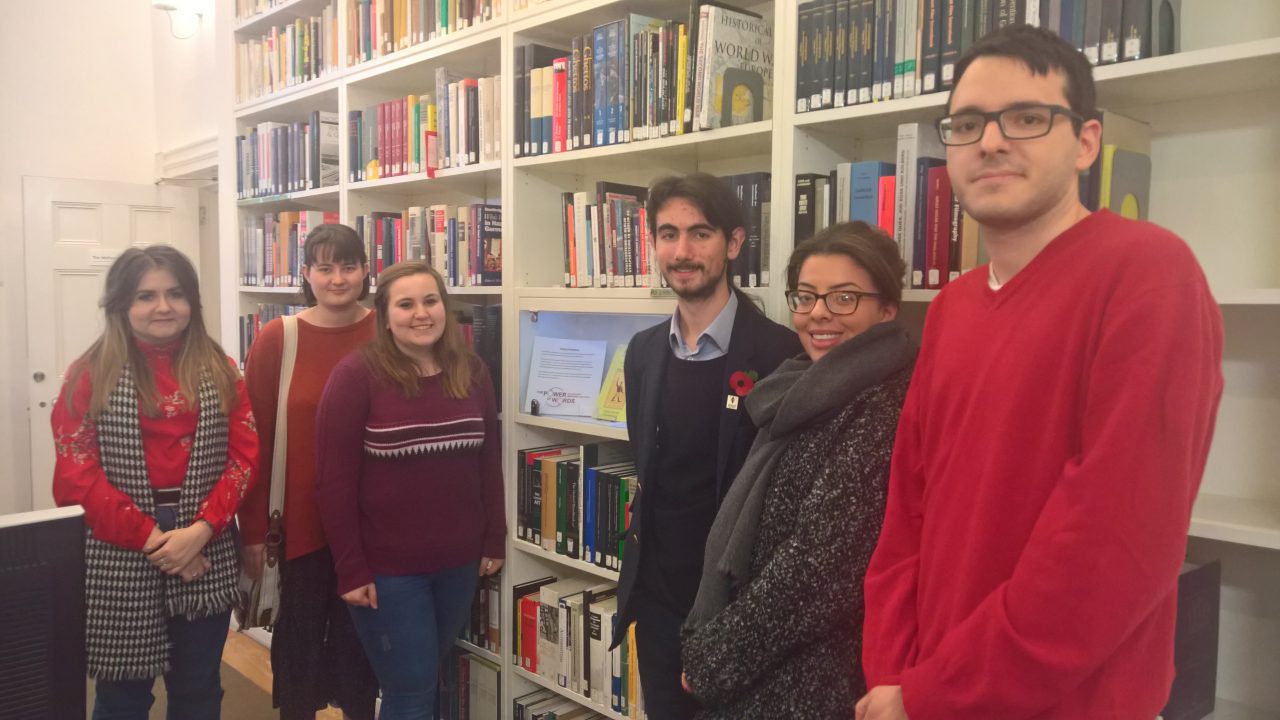 As members of the Youth Champion Board, we had the opportunity to work with The Wiener Library to curate an exhibition for their reading room. We explored the archive material at the Wiener Library to research and produce our exhibition. To link in with the theme for Holocaust Memorial Day 2018, The power of words, we chose the exhibition topic ‘Words of Resistance’.

The exhibition reveals the ways that words were used as a form of resistance by people who wanted to criticise perpetrator regimes and stand up against them. Words were used in a variety of ways: from a joke book written by a schoolgirl in 1930s Germany, to records produced in the Warsaw ghetto. In keeping with the theme for Holocaust Memorial Day 2018, these examples demonstrate the power of words through the documents and materials of everyday life.

One part of our exhibition focused on words used by ordinary people to criticize the Nazi regime. One item held by the Wiener Library was the handwritten diary of Kitty Fehr. Kitty was 15 years old when she lived in Nazi Germany. She heard many anti-Nazi jokes, which she recorded in her journal. Kitty fled Germany in 1939, bringing her journal to the UK.

The Wiener Library also holds a copy of a book published in 1939, entitled ‘The Joke’s on Hitler’. This contained many anti-Nazi jokes and was smuggled into Germany in the pre-war years. These examples of anti-Nazi literature show how words were used to resist perpetrators. These seemingly small acts of resistance had terrible consequences for those caught by the regime. Our research revealed that in 1943 a German woman, Marianne Elises, was executed for telling an anti-Nazi joke. Using these sources, our exhibition showed how even in such dark periods of time people used the power of their words to challenge perpetrators, often at great risk to themselves.

Another part of our exhibition focused on the Oyneg Shabes Archive. Compiled in the Warsaw ghetto, the archive tells us what everyday life was like for Jews at the time. An act of written resistance itself, the various items document the power of words in society. Trolley tickets, school essays and drawings show the continuation of everyday life and culture, even during the most horrible circumstances. The archive was split into three parts, only two of which have been discovered: the first in 1946 and the second in 1950, containing 35,000 documents. It is currently held at the Jewish Historical Institute in Warsaw and has been listed on the ‘Memory of the World’ register by UNESCO.

Our exhibition allowed us to explore the HMD 2018 theme, The power of words in more depth. We looked at topics of resistance that we had not considered previously. The words seen and heard in the 1930s and 1940s – in newspapers, communities and conversations – all had an impact on people’s lives.

Being able to research and explore the primary resources first hand was an extremely useful and educational task. Often, we learn about history purely through school textbooks so engaging with the archives at the Wiener Library was a truly valuable experience. Reading handwritten accounts gave us a closer connection to this period of time and the people at its centre. We are very grateful for this amazing opportunity to handle, explore and present items from the archives.