In this podcast we speak to Professor Gregory Woods, Professor of Gay and Lesbian Studies at Nottingham Trent University author of the introduction to Pierre Seel’s testimony. 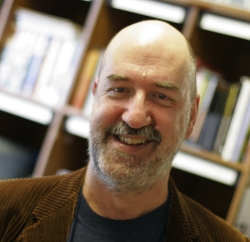 You are listening to a podcast by the Holocaust Memorial Day Trust. The views expressed in this podcast are those of the individual contributor and not necessarily those of HMDT.

So, Gregory, you wrote the foreword to the new translation of I, Pierre Seel. Why did you feel it was important to provide an introduction to his memoir?

I think with some books that are so unique and in lots of ways so surprising to a modern audience, it’s sometimes a help to create some kind of bridge between the time when the book was written, the time that it’s reporting about, and our own time of reading the book and thinking about it. I wanted to make a kind of bridge between what might seem terribly distant, the sexual politics of the era of Nazism, and our own period, which is clearly in so many ways much more liberal, and more relaxed and open. But I think there are still important connections to be made.

You talk about the difference between physical memorials and the commitment of reading a testimony. What do you hope people will gain by reading Pierre’s story?

Well, I’m a great fan of memorials in lots of ways. There are so many extraordinary war memorials in our country, for instance, and so many memorials around the world of major and sometimes terrible events that need to be remembered. But let’s remember, also, that physical war memorials can just be items on the tourist trail, that one can quickly photograph and then move on from. Very often one doesn’t know particularly what they are commemorating – it’s just some war in the past or some terrible massacre, and yet you can pass it by. You have your photograph and that’s that. Whereas, if one has a memoir of actual events from someone who, voluntarily or not, took part in them, was either an active agent in them or was a victim of them, then first of all we’re getting a first-hand account; but, also, the act of reading an account, the act of actually going through a whole book – chapter by chapter, thinking about it, seeing the full detail of the experience – is so much more, more of a commitment on our part, and we’re getting so much more of the details of what happened.

Could you tell us about the introduction you’ve written to the book?

In the 1970s, when I was a student and beginning to get involved tentatively in gay politics, it was the same period when historical accounts of the Nazi persecution of homosexual people were beginning to be published. And so we were starting to see that a whole area of persecution had not been recorded previously and had not been commemorated. And so, across the Western world, student groups in particular and activist groups started taking on the responsibility themselves although we had no direct connection with the Holocaust, most of us. We took it on ourselves to take the symbol of the gay victims, the Pink Triangle, and to start insisting that that be appearing in commemoration services; for instance, on Armistice Day in Britain. And so one year, when I was a student, we got our student’s union, this was in Norwich, the University of East Anglia; we got our student’s union to make a Pink Triangle wreath, and we wanted to place that on the Norwich War Memorial, along with all the other wreaths on Armistice Day, and there was a lot of objection to this and some people tried to interfere with our wreath-laying; to throw our wreath across the market place and so on. And so I think it was important to us personally, just to see how, still how controversial the simple presence of gayness in the kind of national body still was, how controversial it was, angry it still made people. And I think still today that’s the case, that some people are very upset by the mere presence of openly gay people, and upset to think that they should be accepted.

Do you think that homophobia overall has lessened in the UK since then?

Yes, in terms of the institutions of the state, homophobia has been gradually reduced – homophobic laws, for instance, have been reduced, particularly during the administration of Tony Blair, and the age of consent has been equalised, and civil partnerships have been introduced, and so forth; and in some ways in my lifetime (I’m just coming up to 60) there have been extraordinary changes. When I was first on the scene in England, sex between gay men was still illegal. And so to see civil partnerships being celebrated and so forth, we’ve come an enormously long way. On the other hand, I think there is one area where things have got worse – and that’s in school playgrounds. Because of the much greater visibility of gay people, I think there is a basic level of horrible homophobia amongst school kids that I don’t think school playgrounds had in the past – is because kids weren’t thinking about those kinds of things at all. Whereas, now, there are so many representations on television and film of lesbians and gay men – positive ones and negative ones – I think kids are in some strange way obsessed with gayness. And the way in which the word ‘gay’ has become an all-purpose negative seems to me to be very, very worrying. I mean, if school kids were routinely using the word ‘Jewish’ or ‘Asian’ to mean a negative, and yet were then claiming ‘Oh we’re not being anti-semitic, we’re not being racist’, I think people would soon see through that. And I think that the use of the word ‘gay’ in schools is really very nasty because it does – it is threatening to young gay people.

What can we learn from the fact that Pierre was not recognised as a victim of Nazi Persecution until 2003?

Well, a terrible thing happened, at the end of the Second World War, to a lot of the Pink Triangle prisoners who had survived the concentration camps. Their supposed liberators regarded them as common criminals and, having released them from the concentration camps, then put them in prison to serve out the full length of their sentence. And, even if they were actually released from the camps, the atmosphere in post-war Europe was not the slightest bit pro-homosexual. These people came out into a hostile world – it wasn’t as hostile as under Nazism, but they came out into a society where gayness or gay sex between men was still very much illegal, and lesbianism and gayness were still very much unacceptable ways of living. And so a lot of these men and women had to go back into the closet. They had to pretend that they had been in the concentration camps for other reasons than being lesbian or being gay. And this is the case with someone like Pierre Seel. He was, as it were, closeted about why he had been in the concentration camp. He had to pretend that he had been there for political reasons. And so it was not until very late in his life that he was persuaded by young, French, gay liberationists that, actually, it was still very important that he bear witness to what had happened to him, because so many of the people who survived as Pink Triangle prisoners spent the rest of their lives hiding and never gave an account of what had happened. So I think it is terribly important that we recognise not only his courage in him coming out so late in his life and giving an account of what had happened to him; but also the young men who had encouraged him to do so from the point of view of gay liberationist politics, I think, without them, he would not have felt safe to give his account.

The theme for Holocaust Memorial Day 2012 is Speak Up, Speak Out. Pierre finally spoke up in the 80s about his experiences when homosexuality was referred to as a sickness. Why is it important that we speak up when we see or hear discrimination?

Well, I think that there are different kinds of speech that are necessary. I think that those of us who observe persecution of other people should not stand by and let it happen. Those of us who are ourselves victims of persecution, if at all possible, should tell other people that this is happening, and even, if at all possible, if we dare to stand up to our persecutors – I know this is easy to say, but sometimes it is possible – to answer back; and those who are attacking us are sometimes so surprised that we’re not acting like victims that they stop what they’re doing. So I think that there are moral choices that we can make. We do have to make society an uncomfortable place for those who attack other people – who persecute them, and who bully them. And I think there is a collective responsibility for this. We don’t have to be individual heroes, we don’t have to physically attack bullies – that’s taking part in their kind of activities. But if we all collectively show our discomfort with persecution and bullying – whether actual violence or violent language – then we can gradually make it clear – as I think has, in part, happened over the last couple of decades – we can gradually make it clear to people that their behaviour is absolutely unacceptable in a civilised society.

And finally, then, can you tell us about your work at Nottingham Trent University?

Well, I’m a professor of Gay and Lesbian Studies. But I don’t have a department of my own, I don’t teach a degree in Gay and Lesbian Studies. What I do in the School of Humanities is, I feed gay and lesbian courses, gay and lesbian topics, as it were, into the broader syllabus that we’re teaching to all of our students. And I think that’s rather important, because what I find if I teach purely gay courses is that, sometimes, the very people who avoid doing them are young gay students, who are a bit scared to appear on those courses. So I find it very important to put gay material into our general courses so that both the frightened gay students and the hostile homophobic students actually have to deal with some of the issues that I am bringing up. So I suppose my aim is to integrate issues around gay politics and gay culture into our broader sense of what it means to be human.