Nine year old Martha Blend escaped from Austria on the Kindertransport in 1938, leaving her parents behind. As part of our 2011 Hidden Histories project Martha showed us her autograph book which she brought to the UK with her. 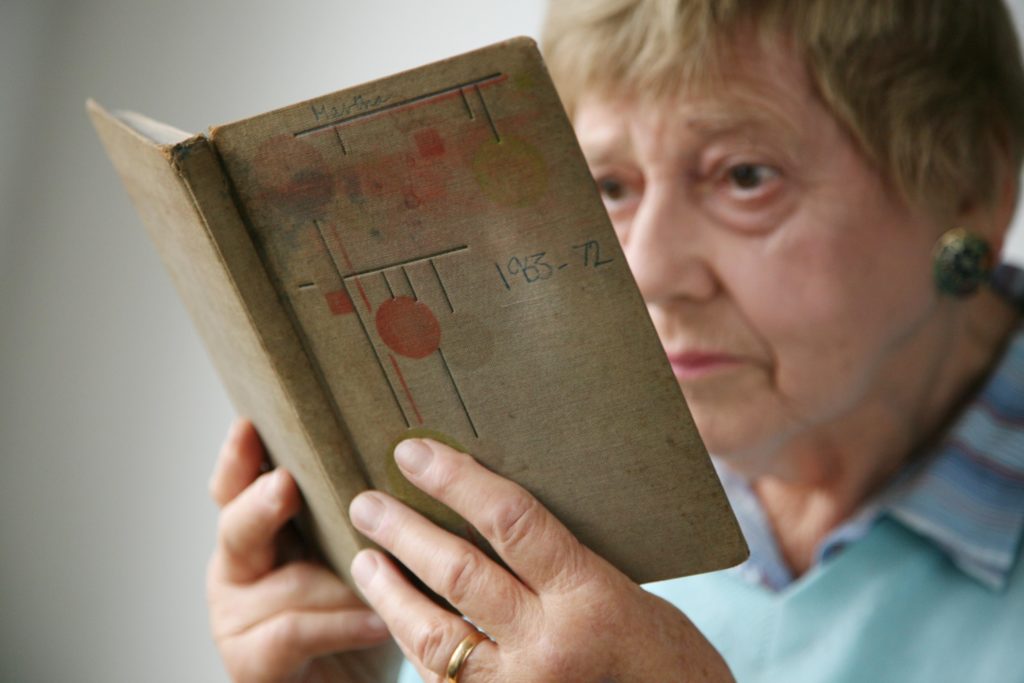 In this picture we can see Martha with one of her cherished possessions. It’s a tiny book and it certainly doesn’t appear to be very valuable. In fact it seems quite worn with age. Martha says it is a book of important messages brought to England from Austria. The messages are all handwritten in German, some of them are amusing and some are quite serious. In 2011, an age of electronic communication when messages can reach other people within seconds it is perhaps hard for us to understand why a small book of old messages remains so important to Martha. We need to find out more about the Untold Stories represented in this one tiny book.

In January 1938 Martha celebrated her eighth birthday. It was a special day and her friends and family helped to make the day a memorable one. Martha’s cousin gave her a useful birthday present. It was an autograph book. Martha was filled with great delight as she asked the people she knew and cared about to write personal messages in the new book. Her school friends and relatives picked up their pens and pencils and filled its pages with their thoughts. The entries were varied. Some wrote witty comments whilst others wrote more earnest statements about the importance of good behaviour and getting on in life. Martha’s father wrote a piece of special advice about education. His message to his daughter was ‘He/She who puts the effort into their studies will achieve their life goals.’ Martha was very pleased with all the messages. They were a record of a happy time. A few months later, in April, the Nazis entered Austria and her life changed forever. The small autograph book and its messages for an eight year old girl would soon represent a vanished world.

In 1939, only a year after her birthday, as the Nazis began to make life extremely difficult for Jewish people, young Martha had to escape from Austria. Her family sent her on the Kindertransport to safety in England. In her suitcase she carried her favourite doll and the autograph book.

Nine months before the Second World War, the UK opened its borders to about 10,000 children. Most of the children, like Martha were Jewish, and their families sent them to England to escape from the terrors of the Nazi regime.

The children had to travel without their parents and they arrived in the UK from Austria, Germany, Poland and Czechoslovakia in a process that became known as Kindertransport. Following Kristallnacht a night of Nazi extreme organised violence against Jewish people, charitable groups like the Red Cross organised the Kindertransport which enabled unaccompanied children between the ages of 5 and 17, to travel to the UK by train and ship. The Kindertransport saved the children’s lives but separated them from those they loved best, their parents. By the end of the war many were orphans.

Martha was never to see her father again. He was imprisoned by the Nazis and murdered in Buchenwald in 1939. The autograph book took on new significance as it now contained the only surviving sample of her father’s handwriting.

Martha remained in England and grew to adulthood. She had to build a new life away from her homeland. She always remembered her father’s message. The autograph book became and remains a treasured possession. The messages it contains now represent the world the Nazis destroyed. Martha’s father was murdered, other relatives were scattered and to this day Martha does not know what happened to many of the school friends whose words of wisdom, joy and hope filled the pages of her book. As she holds it in her hand it links her to the world she had to leave behind.

Today Martha uses her autograph book to share Untold Stories with young people. She donated her doll to a museum where it is used to help visitors understand the story of the Kindertransport but she will never part with the autographs. She hopes that as she reads their messages to people they will understand more about what was lost when the Nazis were in power. The messages, written by the relatives and friends of one eight year old girl, represent the world destroyed by Nazi policies of hatred.

On Holocaust Memorial Day 2011 Martha wants young people to understand how hate propaganda can make ordinary people do terrible things. She asks you to remember to think for yourselves and not to listen to those who spread hatred. Martha believes that if youth can spread goodwill rather than hatred and ally itself with those who work for good, like teachers and doctors, rather than rabble rousers then her precious autograph collection and its Untold Stories will become not only a record of a vanished world but also a symbol of hope.