Holocaust Memorial Group Hartlepool was founded in 2014 and is supported by Hartlepool Borough Council Youth Services. HMG Hartlepool is made up of twelve young people aged 13-19 who work hard all year round to educate themselves and raise awareness amongst their peers about the Holocaust and subsequent genocides. This year, they have fundraised money through bag packing, sponsored events and selling crafts to visit museums and concentration camps around Europe. They shared their reflections in an educational booklet highlighting their experiences of visiting these places to encourage others not to forget the lessons of the past. Caitlin, aged 15, says “Informing people about the Holocaust makes me feel like I’ve played a part in the prevention of discrimination”.

In partnership with Hartlepool College of Further Education, HMG Hartlepool developed an educational DVD about the story of Lady Milena Grenfell-Baines, a survivor of the Holocaust who was one of the 669 children that Nicholas Winton helped to bring to England from Czechoslovakia. The film, named after the 2016 theme, Don’t stand by has had over one thousand views on YouTube and has received high praise from Milena and her sister Eva, who was also brought to England on the same train. Eva says “Don’t Stand By is an inspirational film about a remarkable 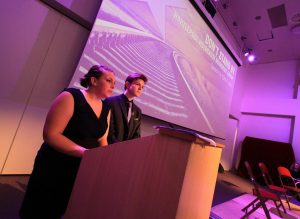 man, featuring an outstanding group of young people. They exemplify the highest level of social consciousness and civic responsibility.” You can view it here.

Alongside talented musicians Brian Barnes, Gary Millar, Joe Solo and Sara Dennis, HMG Hartlepool wrote and produced a song based on the liberation of concentration camp Bergen Belsen. The song, ‘Through the Wire’ has since been recorded in a studio and plans are in progress to perform the song at a ceremony in Heugh Battery which will mark the liberation of the Bergen Belsen camp next year.

HMD 2016 marks their third commemorative event for Holocaust Memorial Day and all of their hard work was showcased in a commemorative evening on 25 January with an audience of 200 distinguished guests including friends, family and members of the local community. 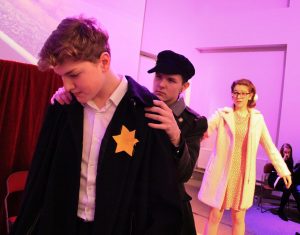 The event consisted of speeches, drama, music and film. A moving candle lighting represented each group of people persecuted during the Holocaust and in subsequent genocides. Many educational and commemorative readings surrounding the theme Don’t stand by were read and Holocaust survivor Gabrielle Keenan spoke about her story of when she was brought to England on the Kindertransport. A play was written by a member of HMG Hartlepool and performed by the members of HMG Hartlepool which explored the issues of bystanders during the Holocaust. Jasmine, aged 16, says “The part I find most rewarding about organising a HMD activity is seeing the impact that it has on the audience and knowing that you have left them with a deeper knowledge and understanding”.